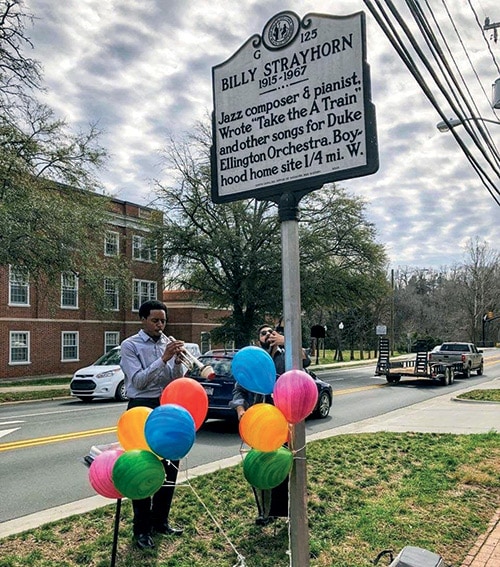 Jazz composer and musician Billy Strayhorn was born in Dayton, Ohio, but grew up in Hillsborough.

The historical markers line Churton Street like so many signposts, one of them pointing to the man who wrote the jazz classic “Take the A Train.” It stands along the curb, giving passers-by a 20-word summary of Billy Strayhorn’s life. The composer and pianist who wrote numbers for the Duke Ellington Orchestra grew up here in Hillsborough.

One sign tells of a Patriot hero in the American Revolution who was from Hillsborough, while another tells of a despised Loyalist who had his home burned down. Still another recounts the public hanging of six Regulators, a group of rabble-rousers who raged against Colonial taxes.

Hillsborough, founded in 1754 and considered the state’s oldest Piedmont town, has long made history hip. But these days, it’s just as common on downtown’s Churton Street to see utility poles plastered with flyers about upcoming concerts or dramatic readings by regional authors.

“Twenty years ago, it was ‘Come to historic Hillsborough, come to historic Hillsborough,’” says Mayor Tom Stevens as he sits at Cup-A-Joe coffeehouse, where the smell of locally roasted coffee beans hits you in the face like a thick, warm cloth, and young professionals gaze at their laptops. “It’s still about the history, but now we’re getting to be known for music. We’re known for writers and visual arts.”

The seven-term mayor and local artist, white-haired and dressed in a tweed sport coat, black crewneck shirt and jeans, owns the Thomas Stevens Gallery on West King Street. Downtown is brush-stroked with studios, including the Skylight Gallery, Eno Gallery and Hillsborough Gallery of Arts.

The story of this former textile-mill town of about 7,200 people is also a literary tale. A couple of dozen authors call Hillsborough home, their creative juices stirred by the classic Southern setting that seems straight out of an Allan Gurganus novel — because it just might be: The author of Local Souls and Plays Well With Others does, in fact, live here.

Other writers taking up residence in Hillsborough include Frances Mayes, author of Under the Tuscan Sun; Jill McCorkle, a North Carolina native who penned Life After Life and Carolina Moon; and Michael Malone, former head writer for the soap opera One Life to Live. This concentration of wordsmiths and storytellers inspired a 2014 article in The Wall Street Journal with the headline, “America’s Little Literary Town.”

The clean-cut old houses, the leafy neighborhoods of white pickets and wrought iron, and the Eno River wriggling up against the southern flank of downtown all make Hillsborough enticing to artsy and writerly types. “It’s a pretty cool place to live,” says Stevens, who has held his post for 14 years. “It’s a fabulous place to come for a day.”

As the seat of Orange County, Hillsborough lies 12 miles north of one of the most celebrated university towns in America. But with nearly 60,000 residents, Chapel Hill is eight times more populous. That’s why Dorothy Whitmore headed for Hillsborough after a decade on Tobacco Road. “Chapel Hill is getting citified,” she says, as Celtic music plays inside the Hillsborough Arts Council, where she volunteers.

Though Whitmore treasures Hillsborough’s small-town feel, the place has an unmistakable cosmopolitan flair. Annie Newton, program coordinator at The Alliance for Historic Hillsborough, puts it this way: “[Hillsborough is] trying to become more of a foodie town. They’re trying to make a name for themselves for food. They want to differentiate themselves from Chapel Hill.” 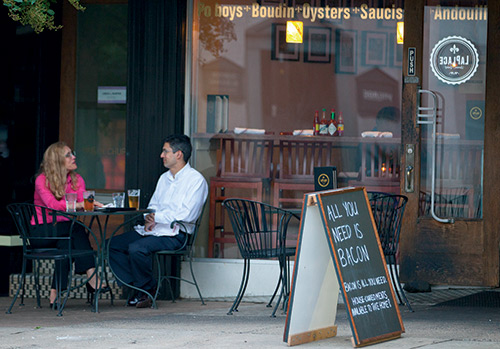 To be sure, this town is a foodie’s free-for-all. At LaPlace Louisiana Cookery, chicken livers share the menu with gumbo, crawfish etouffee, jambalaya and mint juleps. Joe Tullos, a native of the New Orleans suburb of LaPlace, opened the restaurant in 2014 to bring that authentic zest of Bourbon Street here to Churton Street.

Elsewhere in the heart of Hillsborough, you can indulge on burgers, wings and plenty of craft beer at the Wooden Nickel Pub. You can also unleash your best beer-commercial laugh at local nightspot Hot Tin Roof — it actually does have a rustic tin roof — which is styled as a sports bar-meets-juke joint. At King Street Bar, which opened in 2018, chef Tim Lyons offers a chill spot for both the dressy couple on a date night and the guy in a sweatshirt who just wants a PBR.

Food, art, authors and history aside, its Hillsborough’s corporate citizens that cultivate a deep-dish tax base. “We’re not all just shops and restaurants,” the mayor is quick to point out. “We have some of the largest private employers for Orange County.” The town’s location at the convergence of two interstates — I-85 and I-40 — and along the rail line from Raleigh to Charlotte makes it a sweet spot for industry.

Sports Endeavors Inc., parent company of Eurosport Soccer, started in Durham in 1984 when 18-year-old Mike Moylan wanted to develop a catalog to help fellow soccer players find the game’s best gear. A school project kicked off a family business that now employs more than 400 full-timers and more than 300 part-time and seasonal staffers. Now based in Hillsborough, the company says it’s the largest retailer in the world for soccer, lacrosse and rugby equipment.

Another family business that has boomed in Hillsborough is Vietri Inc., which imports Italian handcrafted dinnerware that is sold at more than 2,000 specialty stores around the world. Vietri started when Lee Gravely and her daughters, Frances and Susan, became enthralled by the handmade ceramics, glass, pewter and stoneware they discovered on a trip to Italy in 1983. The company is named for the town of Vietri sul Mare, where they met the artisans who inspired them. Today, Vietri is the largest importer of handcrafted Italian products in the American tabletop industry.

Phil Harvey Enterprises Inc. is one of Hillsborough’s “best corporate citizens,” Stevens says. While the company donates tens of thousands of dollars yearly to local charities, its products might make some blush. PHE is the parent company of Adam & Eve stores, purveyor of sex toys, X-rated movies and other sex-themed merchandise. It employs more than 350 people at a three-story brick office building and warehouse on Meadowlands Drive, making it one of Hillsborough’s largest employers.

Phil Harvey, 81, was earning his master’s degree in family planning at UNC Chapel Hill in 1970 when the Illinois native and his late co-founder, Tim Black, started a mail-order condom company. The company added sex-related books, magazines and lingerie, and in 1994 Harvey moved the home office to Hillsborough.

In a nod to Hillsborough’s music scene, Redeye Worldwide established its global headquarters here in 2016. The company founded in 1996 provides distribution and marketing services for independent and up-and-coming musicians. Redeye owns Yep Roc Records, which is also based in Hillsborough and is the world’s largest independent record label, releasing albums for artists such as Chatham County Line, Nick Lowe and Tift Merritt.

Hillsborough has added about 2,500 people over the last three decades, growing at a considerably slower pace than many other Triangle communities. Mayor Stevens says the availability of water and sewer has been one constraint on growth, though a reservoir built in the 1990s can supply a population roughly double that of Hillsborough’s now.

Stevens and his constituents are determined to keep the area unspoiled by unchecked sprawl. “One of the things we have been very conscientious about is to keep the small-town character,” he says. “If we lose some of our best green spaces, we don’t get those back.”

Around here, history is always in fashion, and a creative vibe is putting superb food on the table. Someday, there might be a monument to the chefs, the painters, the writers and the dreamers who keep on making history in Hillsborough.