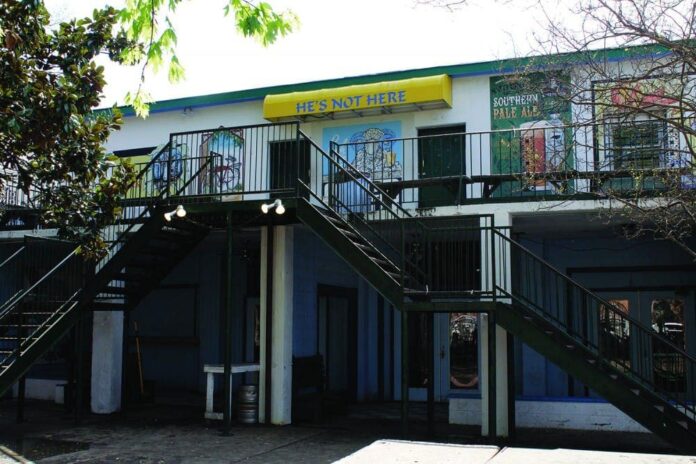 Along Franklin Street in Chapel Hill, down a brick alley tucked between Moe’s and Yogurt Pump sits a staple of the university’s bar scene, He’s Not Here. On a typical final day of exams, the gravel courtyard is packed with seniors jamming to a live band while double-fisting Blue Cups and commemorative pint glasses celebrating graduation days away. But instead of a line stretching from the second floor of the bar out to the bus stop, Franklin Street is deserted.

“Chapel Hill as a whole is a ghost town,” says Fleming Fuller, general manager of He’s Not for the past 12 years. “When campus shut down, the only students that stayed in town were pretty much upperclassmen that had their own off-campus housing trying to have one last hurrah before it’s all over.”

He’s Not, along with most of the bars and restaurants on Franklin Street, have been closed since St. Patrick’s Day by Governor Cooper’s stay-at-home order, causing them to miss out on the most profitable time of year, Fuller says. Winding-down schedules for seniors, warm weather, March Madness (when UNC can make it), baseball season, and plenty of graduation traditions keep taps flowing. But the coronavirus pandemic has shown Chapel Hill what it truly means to be a college town when there’s no (physical) class in session.

The situation is particularly tough for He’s Not Here, which is only licensed to sell beer and merchandise. Fuller says revenue has been essentially zero since the orders took hold. The bar makes most of its money from lots of drinks with big crowds, which isn’t ideal for social distancing. Its shirt and hoodie sales don’t really make a dent and cancelling graduation slashed sales of Blue Cups for parties.

Luckily, Fuller says He’s Not Here is in a stable position thanks to eight straight years of revenue growth and little overhead in general. He preferred not to disclose any specific financial figures. Distributors have picked up and refunded most of the costs for unused kegs, and He’s Not didn’t have much inventory on hand before the pandemic, so losses remained small.

Other competitors are coming up with their own creative ways to remain afloat. Top of the Hill Restaurant & Brewery began distilling hand sanitizer and launched a program called Founders Club 2.0, where customers can pay $100 to have their name on the wall, receive double the fee in-house credit and receive a free beer every Carolina home game day for life, regardless of the sport. That sounds like a deal even for Duke fans.

Goodfellows started selling its pickle juice by the pint for students missing its signature pickleback shots while in quarantine. Other restaurants and stores have created takeout menus that come with cleaning supplies.

Some Franklin Street restaurants have received rent discounts and The Downtown Chapel Hill Partnership, a nonprofit business and community development organization, is providing fundraising and unemployment resources for local companies.

There’s a lot of unknowns about what specific restrictions will be in place when the state begins its phased reopening. He’s Not Here is planning its first day back for May 22 but that could change. Fuller doubts there will be any problems with capacity restrictions because there will be no on-campus summer school, but he’s ready to limit seating if needed.

UNC System Interim President Bill Roper plans for campus classes to resume for the fall semester, which would provide a much-needed boost.

“But I think an understated concern is that the football season might not happen,” Fuller says. “That would really, really rock the market. Then you might see [Franklin Street] staples start to close. And if it does happen, how are we going to handle capacity restrictions at that point?”

Despite daily pandemic developments one thing is certain – He’s Not going anywhere.