In 1999, Onslow County car dealer Harry Brown caught the political bug when he became president of the trade association representing the state’s auto retailers. Almost two decades later, the illness persists: He’s running for an eighth term in the state Senate and now ranks as one of North Carolina’s most entrenched lawmakers. As Senate majority leader, Brown is a key architect of the state’s $23.9 billion annual budget approved in June, while helping drive income- tax cuts that he says will save N.C. businesses and citizens $1.5 billion annually. Such is his power that a half-dozen capital lobbyists contacted for this story declined to comment publicly on his work, citing fear of getting on his bad side.

It’s Brown’s advocacy for rural North Carolina that has gained him particular notoriety, however. As much as any legislator, Brown, whose district includes Jones and Onslow counties, has promoted a Robin Hood-style program of shifting sales-tax revenue from wealthy areas to the poorest regions. “I’m just really concerned about the rural-urban divide,” he says. “Some of our counties can’t take care of their core issues like schools and housing because they have no real revenue stream. We’ve got to address these issues, because a lot of people in rural areas have to have some more opportunities.”

What bothers Brown is the ability of larger counties to grab more sales-tax revenue than their share of the state population. In April, Mecklenburg and Wake counties — with about a fifth of the state’s population — reported sales-tax collections of about $170 million, or nearly a quarter of the state’s total. That enables the two counties to pay teachers more and improve other public services more easily than less-affluent areas. In northeastern North Carolina, one of the state’s poorest regions, “they have no way to replace [school] facilities, no chance for bond packages. They get further and further behind, whereas a wealthy county has more options,” he says.

He’s also pushed for tweaks in how North Carolina doles out incentives: Most of the state’s Job Development Incentive Grants go to Durham, Mecklenburg and Wake counties, which are attracting many of the new jobs. Under a plan supported by Brown, companies expanding in the state’s 20 wealthiest counties receive 75% of the total grant. The other 25% goes into a utility account that helps pay for water, sewer and other projects in struggling areas. If a company expands in one of the 40 poorest counties, it keeps 100% of the grant.

To be sure, lots of effort is underway to bolster North Carolina’s less-populous areas (“Rural Revamp” ). But sending money from Charlotte or Raleigh to other rural spots sparks consistent opposition from urban lawmakers, who note that many of their constituents also have limited resources and require substantial state support. In its 2017 session, the General Assembly approved a watered-down version of Brown’s bill that expanded the sales tax to cover more professional services, then routed some of the increased collections into programs targeting the state’s 80 poorer counties. He promises to keep pressing. “We will take another stab at it, but it will take the right time to do it.” 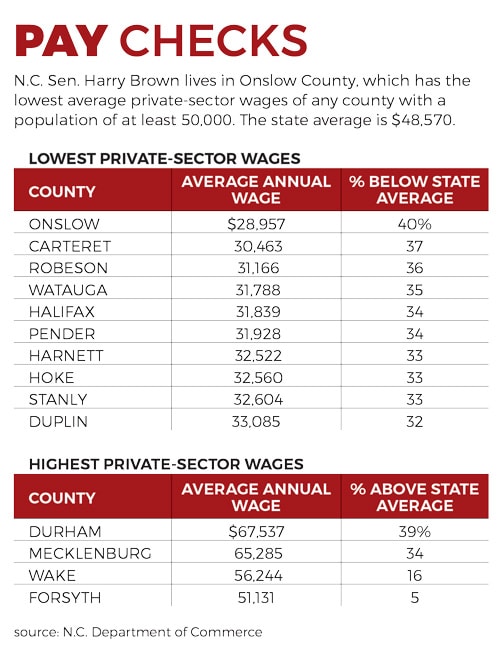 State Sen. Joel Ford, a Mecklenburg Democrat, praises Brown’s shrewd style while disputing his plan. “I was very opposed to Sen. Brown’s plan because it was a redistribution of wealth. We don’t build up the state by taking from the prosperous areas and giving money to the poor ones,” says Ford, who was defeated in a May primary. “But Harry is looking out for rural North Carolina in a very strategic way.”

For example, Brown authored a bill that shifts some registration fees collected by the N.C. Department of Motor Vehicles to a fund that helps coastal communities pay for dredging. “So if you have a boat in Lake Norman that never touches the coast, you are helping pay for dredging at the beaches because of Harry Brown,” Ford says. Brown’s district includes North Topsail Beach.

Brown’s personal story shows how a rural North Carolinian can seize opportunities. He grew up in Maysville in Jones County, one of the state’s smallest and poorest counties with fewer than 10,000 people. His father, who dropped out of school after seventh grade, was a civil-service painter at Marine Corps Base Camp Lejeune. His mother’s family had a tobacco farm, where he started helping out when he was 5 or 6 years old.

After attending public schools through 10th grade, he received a scholarship for his junior and senior years at Onslow Academy, a now-defunct private school in nearby Jacksonville. “They recruited me to play football and basketball,” he says.

After graduation, Brown enrolled at N.C. State University’s engineering school but left Raleigh after a year and a half because he was broke. “I had a great-aunt who left $500, which I used to go to school. But that ran out, and I just didn’t have any money. I was struggling to eat.”

Back in Jacksonville, Brown took a $150-a-week job selling clothing at a downtown store, where he became manager after six months. Hawking cars was a better moneymaker, so he went to work at the local Buick-Pontiac dealership. He loved the business, starting as a salesman, then in 1981 at 26 moved to an affiliated Dodge franchise that was failing.

“The owner asked me to see if I could turn that store around and if not, we’d close it,” he says. “When I got there, I realized it had pretty much already closed. We had only 10 employees, including sales and service.”

A few months of 70-hour weeks later, the business was back in the black. Brown doesn’t take all the credit for the reversal: A key factor, he says, was Lee Iacocca, the famous auto executive who joined Dodge’s parent Chrysler Corp. as CEO in 1978 and engineered a famous corporate turnaround. “He brought some excitement, and the minivans came out, which helped the business.”

When the dealership’s owner died in 1987, Brown took out a $500,000 loan to buy it. At 32, he became one of the youngest Dodge dealers in the nation. Thirty years later, he’s still selling Dodge vehicles, along with Jeeps and Chryslers, surviving downturns and consolidation that has trimmed the number of North Carolina auto dealerships from 700 in 2000 to about 300 now. He’s added Volkswagen and Subaru franchises, while having owned and later sold interests in Chevrolet dealerships in Havelock and Spruce Pine. His car business now employs 125 people.

Brown has branched into other businesses, including an Allstate insurance agency and two radio stations in Jacksonville that he bought four years ago. The stations play beach and oldies music, while providing local news and sports coverage. Befitting the stations’ emphasis on their community, Brown announces Jacksonville High School’s Friday night football games.

By the 1990s, Brown’s success freed him to return to school. He earned an undergraduate degree and, later, an MBA, from Campbell University’s Camp Lejeune campus. He also got involved in the N.C. Automobile Dealers Association, a move that prompted lobbying visits to the state capital. One of his initial impressions was that small businesses lacked effective representation in Raleigh. Then a Democrat, he ran unsuccessfully for the N.C. House in 2002, switched to the Republican Party and ousted Sen. Cecil Hargett in 2004. Onslow County has not elected a Democrat in a countywide election since then, and Hargett, a real-estate developer, says another campaign would have been futile in the increasingly conservative area.

“Harry is an honorable guy who has done great things for his district,” says Hargett, who has made several $1,000 political contributions to his former opponent. “If you need something done, he’s going to respond. My view is that if you can’t beat ’em, join ’em.”

Brown has run unopposed since 2006, though this year he’s facing Democrat Joe Webb, a former principal who now mentors new teachers. “I don’t think uncontested elections are good for democracy,” Webb says. “I’ve known Harry since he was a teenager, and I have a lot of respect for him.”

In his first legislative term, Brown played a controversial role in the passage of the state lottery. Votes in the legislature, then controlled by Democrats, were very close on the issue, with most Republicans and a handful of Democrats opposed to the gambling initiative on moral grounds. But in August 2005, Senate President Pro Tempore Marc Basnight called for a vote when he realized that two anti-lottery Republicans — Brown and John Garwood of Wilkes County — would be out of town. Garwood was sick, while Brown was on his honeymoon and unreachable. After the Senate voted 24-24 on the bill, Lt. Gov. Beverly Perdue broke the tie, setting the stage for the lottery.

“I couldn’t support the lottery because I wanted all of the money to go for school construction, and it didn’t,” Brown says. Despite skepticism to the contrary, his trip to Myrtle Beach was legit, he says. “I had gotten married during the session, and so we went on our honeymoon. Some still call it the honeymoon lottery, and it will always be debated as a good or bad thing.”

When Republicans took control of the N.C. Senate in 2010, Brown was tapped as majority leader, reflecting a reputation as an approachable guy who listens to his caucus members. He’s a staunch conservative, supporting the North Carolina Chamber’s jobs agenda on every key vote in 2017 while receiving some of the lowest overall scores from environmental and progressive groups. He has opposed expanding Medicaid for low-income North Carolinians, rejecting the view of Gov. Roy Cooper, hospital executives and many business leaders who say it could provide an economic boost for rural areas.

“You have to put counties in a position where they can help themselves,” he says. “If they depend more on the government, money is going to get tighter and tighter, and I don’t think that is a winning solution long term.”

Brown rebuffs the notion that North Carolina should focus its efforts on bigger cities because the urbanization trend is irreversible. “That is a sad approach and we don’t want everyone to live in three places,” he says. “I really want to fix some things, which is why I’m pushing the envelope on some these issues.”