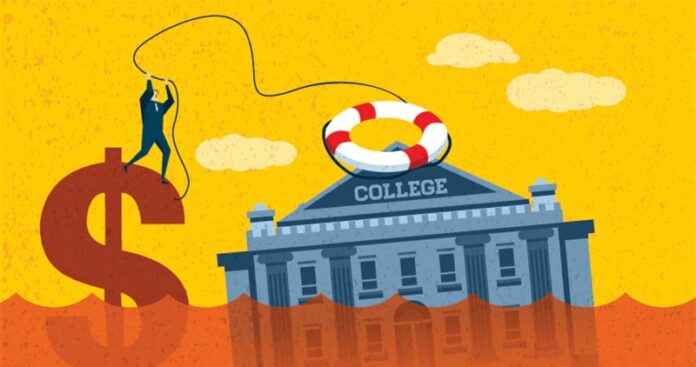 Guilford College faces a serious financial bind, which isn’t a novel situation for one of the South’s oldest coeducational institutions.

In 2001, the Greensboro college formed in 1837 by the Society of Friends, better known as Quakers, had an annual deficit of more than $11 million and appeared to be in a downward spiral. Trustees recruited veteran educator Kent Chabotar as Guilford’s first non-Quaker president. Serving from 2003-14, the former Harvard University education professor helped revive enrollment, balance the budget and raise more than $50 million during his tenure.

But the economics of private colleges remain difficult, to put it mildly. Credit-rating agency Moody’s Investors Service noted in 2018 that about one in five small private liberal arts colleges is under “fundamental stress” due to upward pressures on expenses and “limited tuition-pricing power.”

While Guilford is in no immediate danger of closing, officials say they need to raise $6 million in a year, including $4 million by May 31, to bolster its balance sheet and avoid major cuts to faculty positions and academic positions.

Though Guilford is no longer a church-based college, it’s still known for a progressive perspective based on its Quaker heritage. It was a stop on the pre-Civil War Underground Railroad, helping slaves escape to freedom. It’s always been a key part of the Gate City’s strong higher-education sector that includes about 55,000 students at N.C. A&T State University, UNC Greensboro, Greensboro College, Bennett College and other schools.

Guilford’s community outreach has included the Bryan Series, which has attracted high-profile speakers for more than 25 years, pre-COVID-19. Alumnus Jennifer King in February became the first Black female assistant coach in the NFL with the Washington Football Team.

But losses have ballooned in recent years including a $5 million deficit for the fiscal year ended May 31, 2020. Enrollment declined nearly 20% since 2017 to about 1,350 full-time equivalent students.

The school’s financial filings show that almost all of that decline has been in the college’s continuing education program, aimed at older, nontraditional students. In 2017, the program had 367 students; this year there are about 80.

Over the same period, interest costs have soared as the school issued tens of millions of dollars in debt and tapped lines of credit. Guilford had $79 million in long-term debt as of May 31, nearly double the level three years earlier. The debt stems mainly from costs of renovations of residence halls, athletics facilities, the dining center and arts complex.

After six years as Chabotar’s successor, Jane Fernandes announced her resignation in June 2020 with a plan to hold the job through July 2021. Six weeks later, after dismissing 47 staffers and not filling 34 open positions, Guilford trustees installed Carol Moore as interim president. She had previously led three colleges in Vermont and South Carolina.

Moore initiated a study on how to reverse Guilford’s declining fortunes, producing a Nov. 7 plan to lay off 16 tenured professors and cut 11 other faculty positions — the college has more than 80 full-time faculty. The proposal also called for cutting a third of its majors, mostly in areas with low enrollment. It was a regrettable but necessary step, Guilford’s board said in a release. The plan prompted widespread criticism from alumni, faculty, staff and students who said it violated Guilford’s tradition of consensus decision-making. The faculty passed a resolution of “no confidence” in Moore and the trustees.

As a result, the Guilford board in early January reversed course and suspended the planned cuts. The trustees established working groups to seek a different approach and set fundraising goals, according to emailed statements from Ed Winslow III, a Greensboro attorney who chairs the college board. Guilford needed the “important time and space to do the necessary work together to establish a sustainable future.”

Winslow told a local newspaper that “alumni rose up and said, ‘We really love this place.’ Trustees are trying to respond in a positive way to that.”

He and Moore didn’t respond to requests for interviews. A college spokesperson declined comment.

In late February, Moore was replaced as interim president by veteran English professor Jim Hood. He is a 1979 Guilford graduate with a Ph.D. from UNC Chapel Hill.

Through mid-February, an alumni group, Save Guilford College, had raised $3.3 million in pledges over five years from about 900 people.

Other Triad private colleges have also shown financial stress — and an ability to rebound. Salem College, a women’s college that started granting college diplomas in 1890, was put on probation by its accreditation agency in June 2018 for financial problems. After meeting fundraising goals, it was released from probation in December 2019.

Bennett College, a historically Black women’s university, would have lost accreditation if not for a $9.5 million emergency fundraising effort in 2019.

Greensboro College finished a $21 million capital campaign last year, topping its goal by $6 million. President Lawrence Czarda’s contract was extended through 2026 for helping the college remain in good standing with accreditors and “achieve a sustainable financial stability,” according to a February press release. He has been president since 2010.

Small, private colleges have fewer alumni compared with public schools, which can translate to less giving, says Stathis Poulos, a partner for the BDO consulting firm in Raleigh. Moreover, strong competition for students means many don’t pay full tuition rates, reducing revenue. At the same time, Guilford and others are investing more on their facilities.

Enrollment challenges are prompting some private institutions to cut or freeze tuition and adjust their program offerings. Many N.C. private colleges have increased their health care curriculum, Williams notes. For example, about 90% of the state’s physician assistant degrees are issued by those colleges.

Maria Rosales, a Guilford political science professor and clerk of the faculty, expects job cuts and changes to the academic programs may still happen. But she hopes a gentler, more collaborative approach can be achieved than Moore’s initial plan.