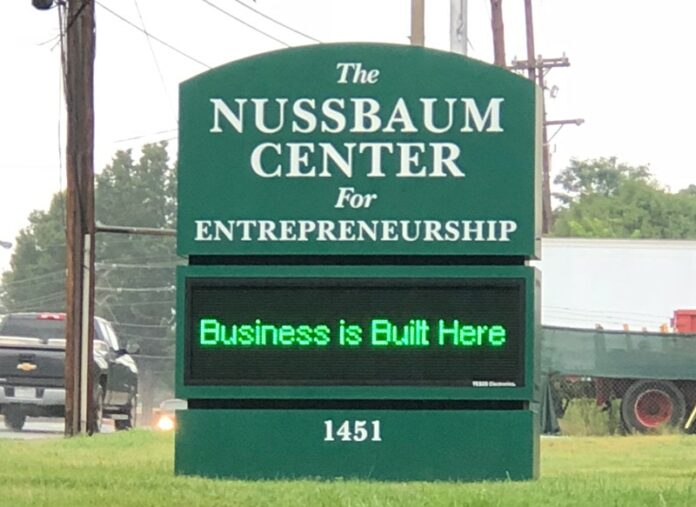 Last month, I wrote about First Flight Venture Center, which is celebrating its 30th anniversary as a technology business incubator in Research Triangle Park.

Another venerable small business incubator that is still hatching startups and jobs is the Nussbaum Center for Entrepreneurship in Greensboro, founded 34 years ago. The two incubators have similar roots.

They were both established with financial support from the now-defunct North Carolina Technological Development Authority, which was one of the state’s major initiatives to promote entrepreneurship in the 1980s and ‘90s. They both were created to surround startups with the kinds of services that would help them succeed.

They are different in one significant respect. First Flight has had a fairly tight focus on high-tech, high-science startups. Nussbaum has a wider-ranging set of young companies: logistics, real estate, accounting, online tutoring, architecture, and HVAC, among other businesses.

These two incubators also both have big plans. First Flight has 25,000 square feet and hopes to double that within 10 years. Nussbaum has larger facilities and an ambitious $26 million plan to turn an old steel-mill building into a modern manufacturing and innovation center.

Nussbaum is a lean organization, with three employees, including CEO Sam Funchess and Lisa Hazlett, the communications director.

It started in 1987 as the Greensboro Business Center, in a former First Union bank branch. Then it moved into the massive, old Revolution Mill, one of a wave of textile mills that were built throughout North Carolina at the turn of the 20th century by entrepreneurs like the Cone brothers. It had been empty for about a decade when the business center relocated to it.

“And we moved in there with, I think it was 25,000 square feet, and over 20 years, grew it to 100,000 square feet,” says Funchess. The center was renamed in 2001 for the late Greensboro Mayor Vic Nussbaum Jr., a member of its board and an entrepreneur who started Southern Foods in 1954 as a meat-delivery service. It became a 550-employee food-distribution company by the 1990s.

Funchess, an entrepreneur himself, had been on the board of the center for three years when he was named CEO in 2006.  Although he grew up in Virginia Beach, he graduated from Guilford College and had an understanding of Greensboro’s challenges: the loss of manufacturing jobs — particularly textiles — and corporate headquarters as old companies like Cone Mills shuttered or went overseas.

“In economic development, jobs matter,” Funchess says. “But if you’re looking to change the trajectory of your community, the only thing that matters is corporate jobs. Corporate headquarters.  When Charlotte began to grow, what was the impetus? It was Hugh McColl,” the long-time CEO of Bank of America, called NCNB when he started a wave of major acquisitions 40 years ago. “[He] said we’re going to make Charlotte the second-largest financial capital outside of New York City. Hugh McColl drove that because he understood the importance of corporate headquarters.”

The economic strategy of recruiting out-of-state businesses results in plants and divisions, but typically not corporate headquarters, with the top decision-makers who control philanthropy and are civic leaders where they live. The best way to get more headquarters is to grow your own, says Funchess, and that’s where business incubators can play a central role.

The Nussbaum center’s current location gives it a lot of growth potential. A dozen years ago, a couple of Carolina Steel buildings were donated to the center, including an office building and an enormous former steel manufacturing facility. The 65,000-square-foot office building on South Elm-Eugene Street now houses around 70 tenants with about 242 full- and part-time employees.

The manufacturing building, what the center now calls the Steel House, is 220,000 square feet that Funchess and Hazlett are trying to renovate into an economic catalyst for the south side of Greensboro’s downtown. The focus will be on attracting food and manufacturing entrepreneurs.

One section would be around 20 “ghost kitchens,” delivery or catering-only facilities, or for restaurants that want to test concepts. Another would be a section for food innovation — producing food for the retail market (like MyThreeSons Gourmet, the pimento cheese company that operated at Nussbaum after leaving the founder’s kitchen.)

And there would be a manufacturing incubator, with flexible space. “With our vision for the Steel House,” says Hazlett, “you rent the least amount of space that you need. And as your business expands, you lease a little bit more space.”

“The ceilings are high enough that we can drop two floors with an atrium, and do an event space. An open air market. Art studios with retail,” says Hazlett.

One of the challenges for manufacturing entrepreneurs is growing out of startup space and needing a modest amount of additional space, but being forced to buy or lease a lot more because of what’s on the market. One former client, a 3-D printer designer-manufacturer, outgrew her space and ended up having to buy two buildings, including one “that’s perpetually for sale,” says Hazlett. “That was the only space she could find that met her need and in her price range.”

While they would love to renovate the entire Steel House building at one time, they are phasing it in with the ghost kitchens first (they have a development partner), a 75,000-square-foot manufacturing incubator in Phase II and the food innovation and production in Phase III.  They are fundraising for Phase II, and have raised more than $400,000 this year, while aiming for $800,000 in order to go after a $4 million to $6 million grant from the U.S. Economic Development Administration, which requires a 20% match.

The pandemic has also resulted in other federal aid flowing down from Washington for job creation entities.

“We are literally going after the funding a dollar at a time,” says Hazlett.

The Steel House has rail access and 11 overhead cranes ranging in capacity from five to 20 tons, because, you know, steel was heavy. The whole complex is pretty well-located, a mile from downtown and a mile from the Interstate 40/85 corridor. Greensboro is where interstates meet in North Carolina.

“Our target is the end of next year, we have Phase 1 and Phase II done, or if not done, vastly complete,” says Funchess.

In the nine years since moving to its current location, the center’s tenants have generated $100 million in revenue and $50 million in payroll, according to Funchess. Also located in the center are representatives of key support groups such as the North Carolina Military Business Center, the Small Business and Technology Development Center,  and NC State’s Industry Expansion Solutions.

The average full-time salary, $69,000, is well above the average Guilford County private sector wage of around $50,600, as calculated by the N.C. Commerce Department. As of the first quarter, 74% of the companies were minority and women-owned enterprises.

The center is at 92% occupancy right now. The average stay is five years, and, according to Hazlett, 79% of the businesses are still in business after five years.  “The SBA estimates that 80% of small businesses fail within the first five years, so our businesses are literally flipping that statistic upside down,” she says.

I was interested in some of the history behind the state’s business incubators, particularly the ones – like First Flight and Nussbaum – that got their start with funding from the Technological Development Authority.  I checked in with E. Brent Lane, a former president of the TDA who is now an executive in residence at Ohio University.

He estimates that there were around 15 incubators funded by the TDA from the mid-1980s to the mid-1990s during his tenure, with a dozen of those still active in some form. (By the time of its shutdown, TDA had supported 23 incubators, according to a 2001 state audit.)

“While varying widely in scale and scope,” he wrote me in an email, “these TDA incubators proved surprisingly robust despite the inherent precariousness of the incubator business model (and an NC law that limited period of occupancy), and the relative unpromising economic context of many of these locations. This perseverance had little to do with us at TDA, rather, I attribute their success to three primary reasons: 1) all required significant, tangible local support (TDA only made startup grants), 2) they were locally managed and responsive to their different markets, and 3) many capitalized on – as intended – collaboration with community college small business centers and [state-supported Small Business Technology and Development Center offices.]”