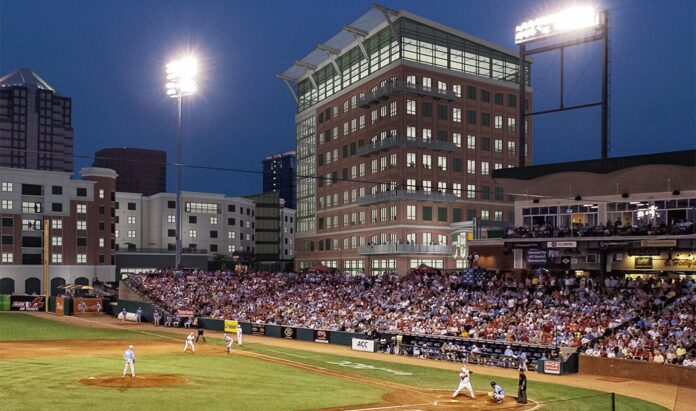 Greensboro is getting its tallest new building since 1990, reflecting renewed interest in a downtown district that has lagged the national urban-renewal trend. The nine-story office tower will overlook First National Bank Field, home of the Greensboro Grasshoppers minor-league baseball team.

The $24 million project is being developed by a joint venture of Winston-Salem-based Gemcap Cos. and Carolina Investment Properties, the Lexington-based real-estate firm led by Robin Team that has developed more than $350 million in the Triad since 1984.

Team’s son, Coleman, had been looking for about a year for downtown office space for the Tuggle Duggins law firm, which needed to move out of Lincoln Financial’s regional headquarters building. (The Philadelphia-based financial-services company is taking over leased space in the former Jefferson-Pilot headquarters tower to house its own staff.) When Donald Moore, president and general manager of the Grasshoppers, raised the idea of an office building adjacent to the ballpark, Tuggle Duggins’ managing partner Nathan Duggins loved the concept, Coleman Team says.

The 30-lawyer firm’s move gave the developers a “bird in the hand,” says Zac Matheny, president of the Downtown Greensboro economic-development group. Tuggle Duggins will lease the top two and a half floors of the 112,000-square-foot structure.

While Triad office vacancy rates were 9.6% in the first quarter, based on a CoStar report, there isn’t a lot of “new, modernized” space downtown, says Team, who is brokering space in the new building. “[The market] is lacking exactly what we are providing. People are looking for a place to build a company, a place where they can attract and retain talent.” Various prospective tenants seeking about 20,000 square feet have expressed interest, he says.

The Grasshoppers offered the property as equity for an undisclosed stake in the project. The site now serves as a plaza, opening to the privately owned stadium. The team’s managing partners include Wes Elingburg, a retired LabCorp executive, and real-estate developers Cooper Brantley and Len White.

About $400 million in projects are underway in downtown Greensboro, Matheny says. Those include the $80 million Tanger Center for the Perform-ing Arts and Carroll at Bellemeade, a $65 million mixed-use project planned by Greensboro developer Roy Carroll on the opposite corner from the ballpark project. Bellemeade will include 291 apartments and a Hyatt Place, the first new hotel in downtown Greensboro in decades, Matheny says. Carroll also owns a site near the ballpark that will accommodate parking for the new office tower. (Aloft Hotels has said it will open in 2020 a 150-room hotel that would sit atop the parking deck, though Carroll hasn’t confirmed the project.)

The ballpark tower marks a departure for Robin Team’s Capital Investment, which mostly focuses on health care, office and industrial properties in the suburbs. The Lexington native got his start in real estate working at Grubb Properties, then started his company in 1984. Current projects include a new headquarters for semiconductor company Qorvo and an office building for Volvo Group North America. Coleman Team, co-founder of Winston-Salem-based Linville Team Partners, says he and his father often work together and co-own Front Street Capital, a private-equity firm.

Winston-Salem-based Landmark Builders is the general contractor on the new building, and Greensboro-based Moser Mayer Phoenix Associates is the architect. The brick façade will be designed to blend with the ballpark while incorporating modern steel and glass elements.

A groundbreaking is scheduled for September, after the Grasshoppers finish the current season, and construction is expected to be complete by the fourth quarter of 2018.

The ballpark, previously called NewBridge Bank Park for a predecessor of First National, was completed in 2005, two years before the recession started. “It was a tough time,” Matheny says. “It’s now really coming to fruition.”

WINSTON-SALEM — HPFabrics, a subsidiary of Istanbul, Turkey-based manufacturer Tukek, will create 260 jobs over three years. The company will invest at least $1.1 million in the former Microfibres plant, making fabric for upholstery and other uses. Tukek acquired assets of the Pawtucket, R.I.-based textile maker after it filed for Chapter 7 bankruptcy in 2016.

GREENSBORO — Bell Partners closed on a $600 million fund, its sixth. The private real-estate investment company owns and manages about 60,000 apartment units across the U.S. Bell Partners has invested more than $12 billion in multifamily properties since 2002, including about $1.3 billion in 2016.

GREENSBORO — Rick Anicetti resigned as chief executive officer of The Fresh Market after less than two years in the position. Chief Financial Officer Brian Nicholson was named interim CEO. The grocery chain, which has 176 stores in 24 states, was acquired last year by New York-based Apollo Global Management for about $1.4 billion.

EDEN — Morehead Memorial Hospital filed for bankruptcy protection. The 108-bed medical center said the action will allow it to restructure debt while it seeks a new partner or owner. Winston-Salem-based Novant Health took over management of the hospital in 2014.

EDEN — Dickinson. The  firm, to be called Womble Bond Dickinson, will have more than 1,000 lawyers at 23 offices and revenue of more than $410 million. Started here in 1876, Womble Carlyle has 15 offices in seven states and the District of Columbia, including Charlotte, Durham, Greensboro, and Raleigh.

EDEN — Debra Crew will remain president and CEO of Reynolds American after the cigarette company’s expected $49 billion acquisition by British American Tobacco in the third quarter. Andrew Gilchrist, chief financial officer, will resign. His replacement has not been named.

Photo provided by Gemcap Cos. and Carolina Investment Properties