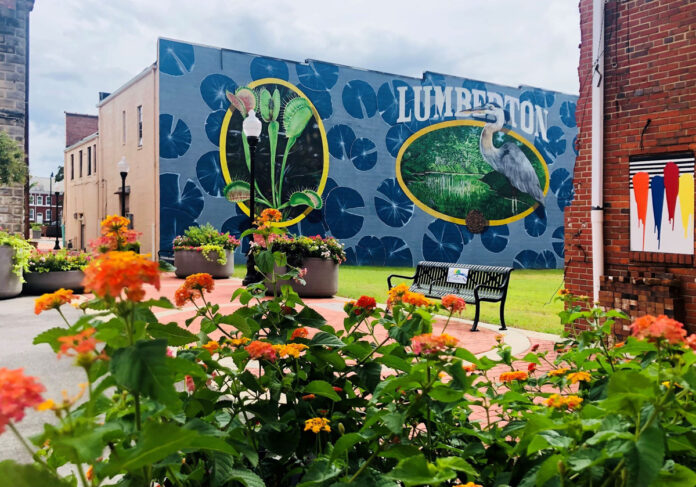 The story of the Carolina Civic Center in downtown Lumberton has had several chapters over the past century, from silent-film house to vacant building to born-again theater space.

Its latest chapter will begin this spring with construction of a planned $3 million annex that can host business conferences, weddings, dinner theater and more. The project is at the forefront of the Robeson County city’s efforts to revitalize its downtown district.

“Every time somebody goes to the civic center that’s not from Lumberton and they’ve never seen it, they’re like, ‘We had no idea that Lumberton had anything like this,’” says Sarah Beth Ward, the downtown development coordinator for the city of 19,000.

The Carolina Civic Center, which opened in 1928 and is on the National Register of Historic Places, draws between 12,000 and 13,000 visitors a year to concerts, theatrical productions and other events, says Executive Director Richard Sceiford. He hopes to triple that number in the next few years.

Downtown has two big assets: its proximity to Interstate 95 and the Lumber River.

Fast-food restaurants and gas stations along I-95 are already popular pit stops for travelers on the major East Coast thoroughfare that runs from Canada to Miami. Downtown Lumberton is only about a mile off the highway.

The Lumber River, designated by Congress as one of five “wild and scenic” rivers in North Carolina, meanders along the west side of downtown and presents opportunities for recreation in a more urban setting. Ward envisions kayakers and canoers paddling south from the James L. Stephens Memorial Park to downtown, where they could get ice cream or drink a beer.

“We’re sitting on a gold mine,” says Ward.

Like many towns across North Carolina hoping to capitalize on renewed interest in downtown living and shopping, Lumberton faces challenges. Many businesses left downtown decades ago for Biggs Park Mall, about a mile away. Many buildings are in disrepair, and about 40% of downtown spaces are vacant, Ward says.

A few new businesses have opened downtown recently, including the popular bakery Sugar Savage, which sells custom cakes and other treats. Owner Ernest Strickland has appeared on three nationally televised baking competitions on the Food Network, including Holiday Gingerbread Showdown.

The city paid a local artist to paint a mural, and UNC Pembroke created a public art class to paint another.

A third mural, which says “Lumberton,” appears at the site of a building that burned years ago. The owner donated the property to the city. That mural, along with a newly completed small “pocket park” with a tent, concrete and grass, will be next to the civic center annex on North Chestnut Street.

With the civic center as a cultural hub, Ward says the city wants to focus on art downtown. The Lumbee Native American tribe, which has its headquarters in Robeson County, takes great pride in its artisans and craftsmen.

“We have so much culture and diversity,” she says. “We want to be all-inclusive in downtown Lumberton.” ■

This article first appeared in the Border Belt Independent. Read more of the nonprofit newsroom’s coverage of Robeson, Bladen, Columbus and Scotland counties at borderbelt.org.