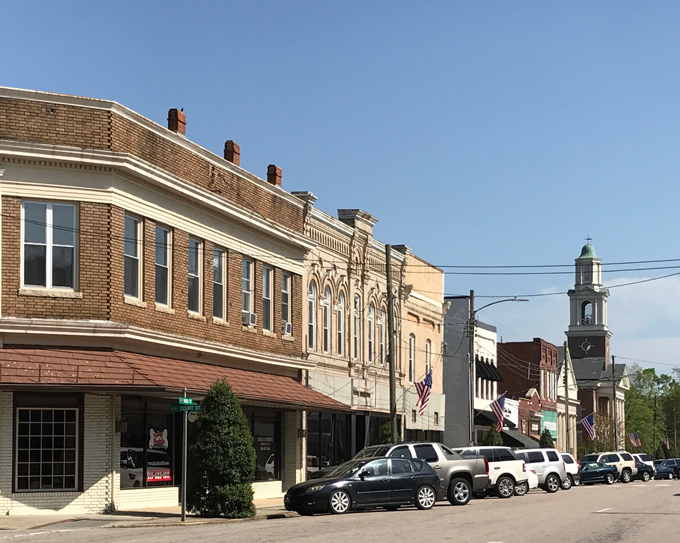 Last week I took a tour of Oxford, a city of around 8,600 residents around 22 miles north of the outer edges of Durham and 25 miles or so from Raleigh’s Outer Loop. My guide was the city manager of Oxford, M. Alan Thornton.

In a few years, Oxford is going to look different. The growth of the Raleigh-Durham Research Triangle is coming up Interstate 85 to the middle of Granville County.

Oxford, the county seat, has about 3,900 housing units — single-family homes, townhomes and apartments — within its six square miles. The city has approved, or has under consideration, developments for nearly 4,000 more residential units, says Thornton. A number of these are outside the city limits and have submitted annexation requests so they can get water and sewer and other services. Over the next decade, Oxford could double its population.

These will probably be wealthier folks. The median home value in the city is around $137,000, according to the U.S. Census. The new single-family neighborhoods will probably be initially in the mid-200s to mid-300s.

That’s more affordable than Wake County, where the median sales price has topped $400,000, and multiple offers are common. In some neighborhoods in northern Wake and Durham counties, houses list for $500,000 and up.

There’s a map that Thornton uses to show what’s happening, with blue and red splotches ringing the city.

The blue splotches are the three developments that have been approved and are under construction, with more than 200 acres of grading and utility lines and roads being built.  “All these together are close to 750 new homes that are taking place now,” he says. The 13 red developments are still in planning phases.

One 76-acre red splotch is on the city board of commissioner’s Tuesday agenda  for annexation. It will be a mix of around 450 single-family homes and townhouses on the Oxford Loop road, where most of the action is. The owner is CAB Granville LLC in Wilkesboro, but the conditional zoning application also comes from APG Capital of Raleigh, long-time developer Jim Anthony’s firm. APG is active in nearby Youngsville, where northern Wake’s growth has already reached past Wake Forest into Franklin County.

That reminded me, as Thornton was showing me the map, of a conversation I had with Anthony nearly 18 months ago. He told me: “National homebuilders are taking positions up in Oxford because the Durham people don’t have any place that they can buy. Supply is so severely constrained there.” One blue splotch is a 302-home subdivision, The Meadows at Oxford, being built by Texas-based giant, LGI Homes.

Thornton drew my attention to a red tract next to the 76-acre CAB Granville property. On the map, it is called the Hunt Property, 540 acres. He pulled out a preliminary sketch showing the layout of the planned housing on both sides of Landis Road, just outside the Oxford Loop. 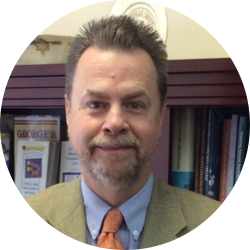 “All you really need to do is take a look at the number here at the bottom,” he says.  I looked at tiny numbers that showed the total: 1,335 homes, most of them single-family.

“Up until eight months to a year ago, we were only looking at one or two developments having interest in Oxford, and within the last year, it has just exploded,” says Thornton.

The city has known it was becoming the northern end of the Research Triangle, and has been getting ready. It passed a new uniform development ordinance last year. Around five years ago, about the time Thornton arrived, the city launched a $100 million project to upgrade its water and sewer lines. Many of the pipes were a century old and older. The city also partnered with nearby Henderson and Warren County to upgrade a 1970s-era water treatment facility at Kerr Lake, doubling its capacity.

Once the new water and sewer lines are in the ground, the city will embark on a major road resurfacing project. “Some of the roads were in such poor condition,” says Thornton, “that you had to rebuild in areas.  By this fall, Oxford will look completely different when you come in and look at the roads.”

“You can imagine the cost of all this that the city has undertaken,” says Thornton.  “It was a real leap of faith for the city to do that, and the board to do that.” He says the city’s commissioners have shown “fortitude” to go through with these improvements.

“You’ve been across the state of North Carolina,” he says. “You’ve seen the boards and politics, and the desire to keep water rates as low as possible, and to put things off.”

Being the manager of a small town is difficult under ideal circumstances, let alone during times of change. You can be one election away from being out of a job, or one ambitious agenda that rubs folks the wrong way.  Thornton, an Appalachian State graduate who grew up in the furniture belt in Conover, has been managing cities and towns in North Carolina since 1987.

Sometimes he has left on his own for a better job, but occasionally he had to move on. When the Oxford commissioners were looking for an experienced manager in 2017, they looked at what happened in some of Thornton’s previous stops in Hudson, Trinity, Erwin, Southport and Tarboro and were satisfied he was the right person. If boards are going to consider only candidates who have never had to leave a municipal manager’s job because of local politics, it will be a smaller pool of applicants.

Thornton is an unabashed cheerleader for Oxford. As we drove around, he pointed out the giant Revlon plant and the CertainTeed shingles factory, Ideal Fastener, and Bridgestone Bandag.  These are some of the companies that have helped keep Oxford’s population steady in recent decades, even as many rural towns lost population. A Miami-based frozen food company, Meel Corp., announced last fall it is coming to Oxford with a couple dozen jobs to start.

Thornton pointed out the new water tower, which has improved service.  We drove through the new roundabout at Spring and Main streets, not universally beloved but the intersection is safer and the rotary makes you think, hey, this is new and interesting, which is intentional.

“We need to make Oxford a little funky, a little weird . . . have some different things going on, seek some things that are just different,” says Thornton. “Everything doesn’t need to be a bail bond or an attorney’s office. We need some things that are different and funky and unique, and the ball is now kind of rolling towards that direction.” In other words, more than just a once-a-year hot sauce contest.

At the end of the tour, he swung the car through downtown, and pointed out the Tobacco Wood Brewing Company, which is pulling in customers from out of town;  Strong Arm Baking Company,  and the Orpheum, an old theater reborn as an event venue.  He pointed to the new Innovation Coworking at First National Oxford, in an old bank building, where spaces have been going fast.

Then there’s the old armory building, which the city acquired after the NC National Guard started consolidating its facilities. It sits on three acres, and the city has had inquiries. But Thornton sees it as a strategic piece of what Oxford will become. “It’s a once in a lifetime opportunity of what you can do there. I want to wait for the right project.”

I have been on tours like this, but usually in small towns hoping that lightning will strike and a massive new industry will show up. It usually doesn’t happen. This tour was different. There’s a lot of red dirt and survey stakes. Oxford reminds me of Clayton in 1996 when I moved here around 15 miles southeast of downtown Raleigh, just before 20,000 of my new neighbors arrived.

“Oxford is no longer a sleepy, little town,” Thornton says. “It is something whose time has come.”