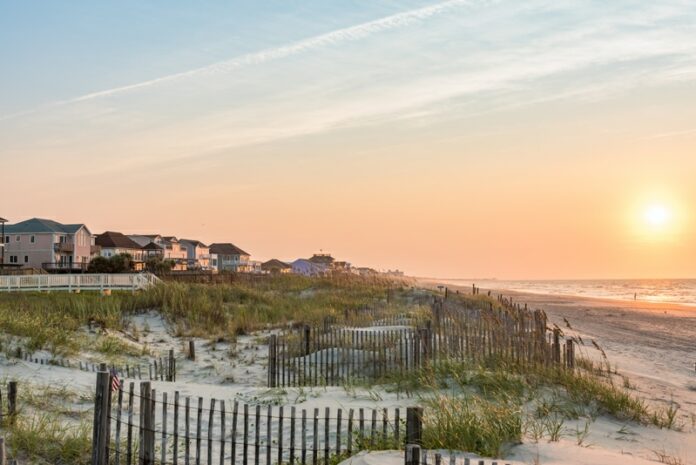 Carteret County on the Crystal Coast, as tourism folks call it, is home to the historic county seat of Beaufort and Emerald Isle. The county sits south of the Outer Banks. (There are some who refer to it as being on the Southern Outer Banks.)

The county has had an economic boom of sorts the past six months because it has become a destination for folks who were cooped up working from home in the cities, especially with kids learning on Zoom. I talked about this with Don Kirkman, the county’s economic development director.

If you live in the Greensboro, Winston-Salem and High Point areas, you may know Kirkman. The High Point native spent a decade running the Piedmont Triad Partnership, a regional economic development organization. Before he discovered a passion for industry-recruiting, he practiced law.

Like many places last spring, Carteret was impacted by the pandemic. But as the weather warmed up, apparently a lot of folks went there. Kirkman shared some statistics that show this.

From July through October, retail sales tax collections went from underperforming 2019 to running 10% ahead.  Occupancy taxes, which come mostly from vacation rentals of homes and condos, also were up during those months over 2019, up nearly 35%.  Real estate excise taxes, which are paid when homes and condos change ownership, were up 88% from July through December over the same period in 2019.

And the county’s unemployment rate, which peaked at 11.3% in April, was 4.9% in November, one of the lowest in the state.

“I think a lot of people decided this was a time when they just wanted to live at the coast, just leave the cities,” said Kirkman. “There was civil unrest in a lot of the major urban cities in our country, and between that and the pandemic, and the greater density of people, people just opted to move to the coast where they could have access to the amenities, and the outdoors, and the recreational opportunities that we have here.”

The occupancy tax stuck out, because Kirkman thought that during normal summer months, the county’s beach towns were pretty much full up. “But the numbers would suggest otherwise,” he said. This past July, the occupancy tax collections were up 41% from July 2019. July set a record for the month, as did August, September and October.

What may be driving the real estate excise tax collections is not just sales of existing homes but new homes as well. Beaufort has a new homes community called Beau Coast, by Preston Development Company, a name familiar to folks in Wake County.  Developers Tim Smith and  Julian “Bubba” Rawl have developed many upscale communities in Cary and are in the process of rolling out the massive Chatham Park in Pittsboro.

Another community that is going up in the county is Heritage Pointe in Newport, which is on the western side of the county, up U.S. 70 towards Havelock and Marine Corps Air Station Cherry Point, a major employer in the region.

What will likely accelerate growth in the next 10 to 15 years are ongoing improvements to U.S. 70 that will transform it into Interstate 42.  Right now, the highway is a mixture of wide open and stoplight-happy. The Goldsboro bypass whips you through Wayne County, but then you crawl through Kinston. Between Kinston and New Bern, it’s 70 mph again, keeping an eye out for bears, but then you hit stoplights after the bridges at New Bern and more in Havelock. In five years, construction in the New Bern area and a bypass around Havelock should eliminate chokepoints. In 2029, work will start on a bypass around Kinston.

Kirkman thinks the transformation of U.S. 70 into Interstate 42 will have an impact on Carteret just as the completion of Interstate 40 down the coast boosted the Wilmington area when it was completed 30 years ago.

“I think we’re going to see dramatic growth in Carteret County following the completion of I-42,” he said.  “Certainly, when Havelock and James City [near New Bern] are improved, that’s going to be a game-changer for us.”