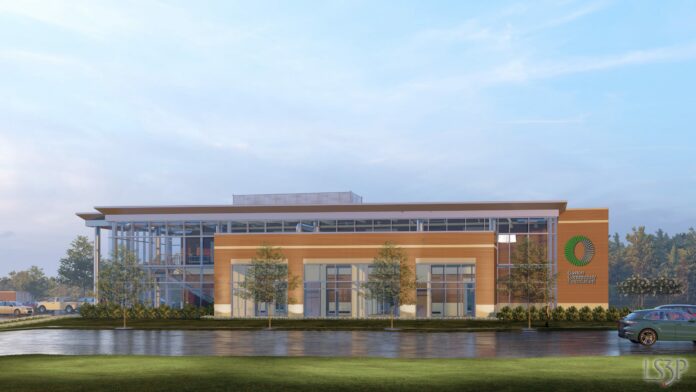 The Gaston Community Foundation is building a $10 million headquarters building, 43 years after the nonprofit was formed with $726,524 in assets remaining from a recently closed community hospital.

Garrison Hospital was built in the 1930s and was managed for many years by the Duke Endowment. It was one of five separate hospitals in Gastonia in the 20th century before its closing in the mid-1970s. The hospital’s leadership in 1978, including E.D. Craig, lawyer Joe Alala and banker Harold Sumner, convinced the community to use its remaining funds to start what was initially called the Garrison Foundation.

That has evolved into a community foundation with more than $120 million in assets and historic donations topping $100 million for a variety of community causes.

In 2020, foundation leaders including former board Chair Timothy Efird and Parkdale Mills CEO Andy Warlick, who heads its investment committee, agreed on the need for a new building on land donated by the David Belk Cannon Foundation of Gastonia. The Belk Cannon foundation is led by the Matthews family, which owned Belk department stores for decades.

The $10 million, 18,000-square-foot structure is intended to spur the foundation’s continued growth so that it can have a bigger impact, says Ernest Sumner, the group’s president. It is expected to open next fall.

“We view this building as a great source of community pride,” says Sumner, a former manufacturing executive and son of Harold Sumner. “We think it can be a major catalyst for our community.”

The Gaston foundation is the only such county-based group in the Charlotte metropolitan area that operates independently of the Foundation for the Carolinas. That organization manages more than $3 billion of assets including community funds for Cabarrus, Cleveland, Iredell, Lincoln, Mecklenburg, Rowan, Stanly and Union counties.

Having its own leadership and investment team reflects Gastonia’s independent spirit and desire for a locally focused organization, Sumner says.

The building near Eastridge Mall and the Parkdale Mills headquarters site will have space for lease to other groups and expects to help revitalize the New Hope Road corridor.

Shelco is the general contractor, while LS3P is the architect. Marsh Spencer, the president of Charlotte-based SteelFab, is serving as project manager.