Fred Whitfield named Citizen of the Carolinas for 2019

Fred Whitfield, president and vice chairman of the Charlotte Hornets, was named the 2019 Citizen of the Carolinas. The Charlotte Regional Business Alliance’s most prestigious award honors those who have made significant contributions to the area’s business growth, economic development and the community at large. 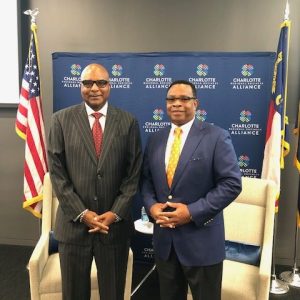 “I am humbled to join the distinguished list of recipients of this prestigious award,” Whitfield said at the ceremony. “I have spent the majority of my life in North Carolina, and even during the few years I lived elsewhere, I always thought of myself as a citizen of the Carolinas.”

A graduate of Campbell University and North Carolina Central University’s law school, Whitfield joined the Hornets organization in 2006, when it was known as the Charlotte Bobcats. He was named president last year after serving as chief operating officer.

Whitfield helped land the 2017 NBA All Star Game for the city, before it was moved to Las Vegas over the  controversial HB2 “bathroom bill.” Whitfield was instrumental in rallying business leaders, league executives and stakeholders to show that the law hurt business development and secured the All Star Game for 2019.

“His leadership qualities really came into play in our most intense interaction around HB2 and bringing the NBA All Star Game to Charlotte,” Rick Welts, president and COO of the Golden State Warriors said at the Alliance event. “Fred reached out to me early, he realized that as the openly gay president with the Golden State Warriors that I would have a unique role to play in this. Fred went out of his way … to help me understand what was going on, explain the political atmosphere, tell us what he was doing. This man gave months of his life to trying to figure out a path where the NBA could come and be proud of everything about being in Charlotte, and that Charlotte could be proud about hosting the All Star Game. I don’t think there’s another human being in the world that could accomplish what he did in the most difficult circumstances.”

In the Hornet’s most recent partnership with the Charlotte Regional Business Alliance, Whitfield helped coordinate economic outreach looking to bring French investment to the Queen City. The Hornets will take part in the NBA’s first regular season game in Paris on Jan. 24, which will incorporate networking and economic development events to lure French firms to North Carolina.

Whitfield is also invested in the community through his Achievements Unlimited basketball program and camp, which helps disadvantaged children through educational programs. As part of his nonprofit HoopTee Charities Inc., Achievements Unlimited has served more than 10,000 children in Greensboro and Charlotte over the past 34 years.

“He’s a steward of basketball, cares for the game, loves the game and honors the game every day,” says Welts. “There’s no greater champion for Charlotte and the Carolinas than Fred Whitfield.”

Whitfield was inducted into the North Carolina Sports Hall of Fame in 2018 and received the 2019 UNC Charlotte Distinguished Service Award. He is also a recipient of the Charlotte Chamber Economic Growth Champion Award for 2017 and has been named to Business North Carolina’s Power 100 list of the state’s most influential business leaders.