About six years ago, Garrett Tichy left his corporate job to create a marketing agency with a partner. While enjoying the freedom of working from home, they realized their productivity had hit a record low. Wanting a change of scenery, they sublet some office space near downtown Charlotte. Before long, Tichy started thinking about the bigger potential for shared workspace.

“[The landlord wasn’t] embracing the space as true coworking,” Tichy says. “I thought, ‘What if we truly tried to curate and cultivate something intentional?’” Tichy and his partner, who has since left the business, leased an adjacent 3,000-square-foot building and officially opened Hygge Coworking. Pronounced “hoo-gah,” hygge is a Danish word that embodies warmth and coziness. Tichy’s Hygge strives to create those feelings by offering coffee, Wi-Fi, a place to sit and the

opportunity to become involved in a community.

In April, Tichy opened Hygge’s fifth and largest location in a renovated 20,000-square-foot space in the fast-developing FreeMoreWest neighborhood in west Charlotte. Each of the site’s 47 private offices were leased prior to opening, prompting plans to open more locations and add on-site fitness amenities. The Hygge sites cumulatively total more than 80,000 square feet.

“People like what we’re doing,” Tichy says. “I want to create a space where you can be yourself. Hygge is a mental state of well-being.”

Hygge exemplifies a trend that may upend traditional office real estate. In the “sharing economy,” people are renting instead of buying homes, cars, bicycles and office space. Coworking, or the use of shared workspace by a variety of people, has grown rapidly in North Carolina’s metropolitan areas, led by New York-based WeWork Cos. Inc., Amsterdam-based Spaces, Capitol Broadcasting Co.’s American Underground in Durham, Greensboro’s Revolution Mill and others.

Charlotte now has about 850,000 square feet of flexible office space, most added in the last few years, according to Jones Lang LaSalle Inc., a commercial real estate firm. Raleigh-Durham has an estimated 1.2 million square feet, including more than 595,000 square feet added since 2017.

The sector has grown at an average pace of 23% annually since 2010, according to JLL. In 2018, it made up for nearly two-thirds of the country’s office market occupancy gains. While still less than 2% of total U.S. office inventory, coworking and flexible workspace may account for 30% by 2030, the company says.

“This is disrupting the landlord industry and office ownership industry quite a bit,” says John Culbertson, a commercial real estate broker in Charlotte. “Lenders are also having to learn to get comfortable with this.”

Coworking has existed for decades on a lower profile. In the ’90s, there were more failures than success stories, primarily due to the instability of companies leasing the space. Offices were built for one- to three-person groups, mainly startups that thrived during robust times but dissolved when the economy softened.

Today’s users are different, says Barry Fabyan, managing director of JLL’s Charlotte office. In addition to entrepreneurs and freelancers working in creative fields, demand for coworking space stems from Fortune 500 companies waiting for office buildings to be completed or firms with teams working on special assignments. Some major corporations are opting to manage their changing internal real estate needs by leasing coworking space. If an established company is experiencing a growth spurt, for example, it could have people working out of a coworking space within 72 hours, versus the 72 days it might take to secure office space in the past, Fabyan says. Companies also don’t have to worry about providing their employees with parking, which is sometimes part of a coworking contract.

“What we are seeing is [that] corporate America is making coworking a critical component of its real estate portfolio strategy,” Fabyan says. “The coworking influence is only just starting to be felt.”

WeWork, arguably the best-known operator of coworking spaces, was founded in 2010 and now has more than 250,000 members. Many are in New York, where work generated at its locations makes up about 2% of the city’s gross domestic product, according to New York real estate consultants HR&A Advisors Inc. 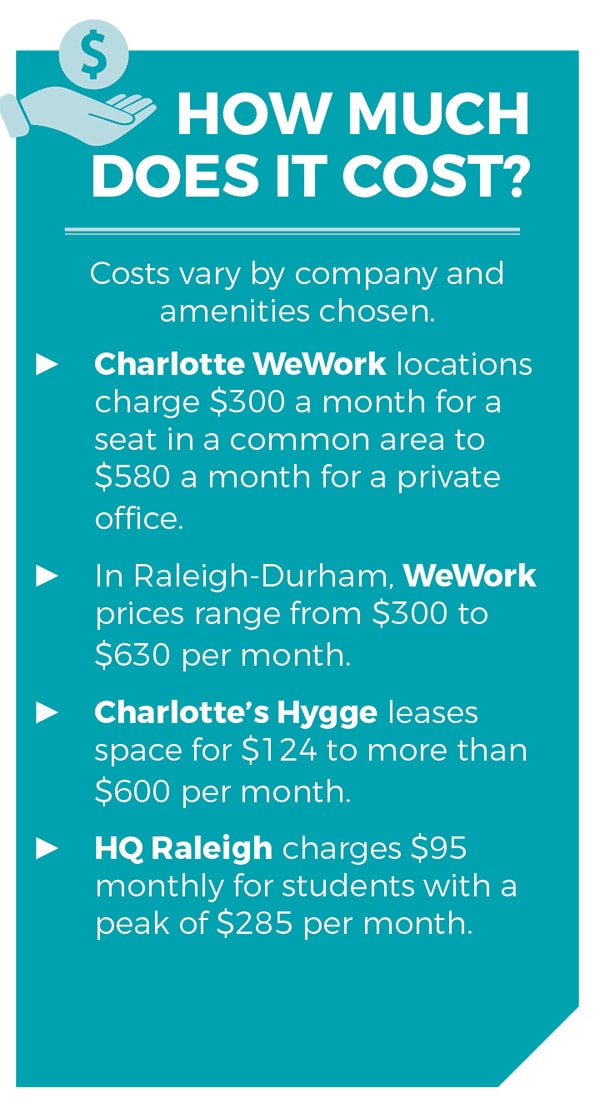 WeWork is growing rapidly in Charlotte, Durham and Raleigh, including space at some of the cities’ most popular new buildings. The company is leasing two floors at the new RailYard building in Charlotte’s South End area, and last year, it opened a space in Durham that can accommodate as many as 1,000 workers.

“The impact has been minimal because vacancy rates are still below average,” Evans says.

Raleigh’s office vacancy rate is 5% and Charlotte’s is 7.5%, compared with a national average of 9.8%, CoStar research shows.

“Internally, there are discussions about if coworking is a permanent thing,” Evans says. “I would say I see a space for it, and I don’t see any fundamental reason for why it wouldn’t become permanent.”

Landlords and owners have traditionally preferred leasing to well-established companies with strong credit ratings looking for long-term homes. Coworking spaces typically take on shorter-term leases, pay for most build-out costs, and pay less rent initially and then ramp up as leases are signed. A more traditional client, such as a law or engineering firm, is more likely to sign a longer lease at a fixed rate in exchange for some initial concessions such as construction expenses.

“Coworking types demand a lot of flexibility and a new structure of leases that people have to get comfortable with,” Culbertson says. “Think of it as a landlord. Do you want your largest tenant to have a lot of leverage? And what if that tenant was a startup with an unproven track record and a crazy concept?”

“The upside,” Culbertson says, “is if a coworking tenant is successful, you can get very good rent from them, and there’s a certain trendiness that makes your building cool and hip, and that could draw additional tenants.”

In Raleigh, Alex Dunn, an office leasing broker with Trinity Partners, helped sign WeWork as an anchor tenant taking up more than a third of the space at the 219,500-square-foot One Glenwood office building. Dunn and fellow broker William Allen represented One Glenwood’s owner and developer in the deal. To get a firsthand look at the experience, Dunn and a colleague are leasing space from WeWork.

“Everyone gets nervous with disruptor-type companies, and these are a disruptor to the real estate economy,” Dunn says. “But I certainly think there’s room for them and for the typical institutional landlord. There’s a nice energy in those spaces.”