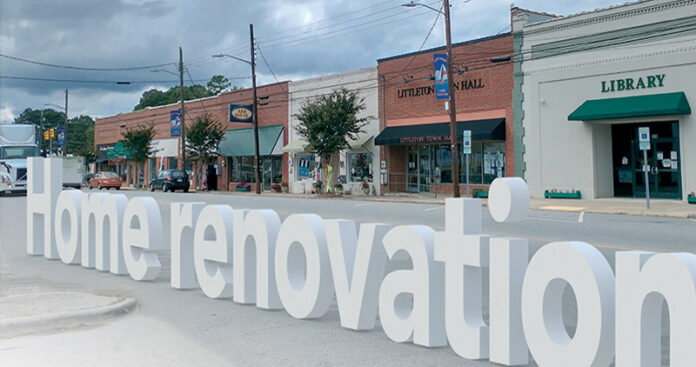 As Ed Fitts stands in the grass behind the old Littleton High School, he can still point out where the goalposts stood when he was a high school student playing football on this exact spot.

It’s been more than a half-century since Fitts moved away, first to Raleigh to attend N.C. State University, then to eventually become a successful packaging executive. But he can still picture those fall nights when the entire town gathered to cheer on the Littleton Blue Jays.

In visits home through the decades, he’s watched the high school building fall into disrepair after it closed in the 1970s. He’s watched the Halifax County town’s once-thriving Main Street give way to vacant storefronts as the population dwindled from about 1,000 when he graduated in the late 1950s to about 600 people today.

Fitts and his wife, Deb, would drive past the old school, and “it pulled at the heartstrings and we said, ‘We can’t allow this to just fall apart,’” Deb recalls.

A request to help fund roof repairs for the performing arts center housed in the school’s auditorium ended up pulling the pair back to Ed’s hometown.

The couple are using their personal wealth, business acumen and tenacity to lead Littleton’s resurgence through a series of development projects. They’ve already opened coffee and wine shops and a fine-dining restaurant to draw people downtown. A brewery is under construction next door.

And this fall, they’ll complete a renovation of the old high school, transforming it into a vocational skills-focused private school called Littleton Academy. They likely won’t stop there.

Ed Fitts won’t say how much he’s investing in Littleton. But he hinted that it’s similar to how he’s given back to his alma mater, N.C. State. There, he joined with another famous alum, former DuPont CEO Ed Woolard, to contribute $25 million for the Fitts-Woolard Hall engineering building that opened in 2020. A separate $10 million donation from Fitts in 2005 led to the Edward P. Fitts Department of Industrial and Systems Engineering.

Fitts, 82, grew up in the small town about 90 miles northeast of Raleigh before earning a bachelor’s degree in industrial engineering from N.C. State in 1961. He worked for Hartsville, S.C.-based packaging company Sonoco for decades, eventually promoted to vice president of paperboard packaging.

In 1979, he bought a portion of Sonoco’s operations that manufactured fast-food packaging and renamed it Dopaco. That company had 1,500 employees across nine plants before he sold it for about $100 million in 2004 and retired. Deb Fitts, who grew up in Pennsylvania, had a long career in the pharmaceutical industry, working for Pfizer, AstraZeneca and other companies.

Revitalizing Littleton is the latest phase of the couple’s unorthodox retirement. First, they owned and operated a winery in California’s Napa Valley before selling it in 2019 to former Apple executives.

By then, the Fittses were increasingly feeling the pull toward Littleton. They’d been returning each year to rent a house on Lake Gaston and attend Ed’s high school reunions. With each visit, they ended up with a small project to help the community.

They agreed to help fund new downtown Christmas decorations. They bought and demolished a series of vacant, dilapidated homes that had become magnets for crime. Getting involved with the high school and Lakeland Cultural Arts Center on the old campus was where the couple’s involvement snowballed.

One of the first orders of business was connecting Littleton to the world. They’d see local kids hanging out behind the town hall, and they realized it was a rare place to access free Wi-Fi. Funding through the Ed Fitts Charitable Foundation helped provide gigabit Wi-Fi through the downtown area and adjacent neighborhoods. Now, businesses can easily add a repeater and secure free internet service.

Littleton also needed more community gathering spaces. The town has a major asset about 5 miles to the north — sprawling Lake Gaston, full of vacation homes that draw folks from a wide region. The lake has about 350 miles of shoreline in both North Carolina and Virginia, most of which has residential development. 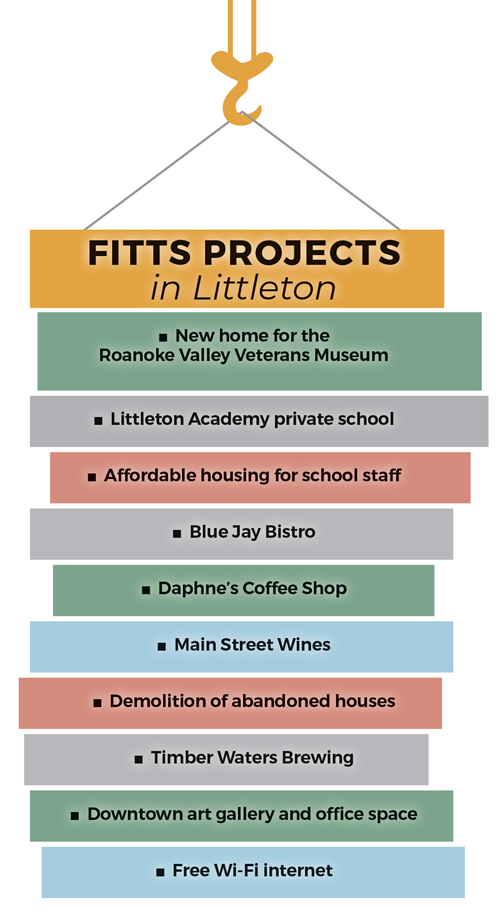 The town is billed as the “Gateway to Lake Gaston,” but vacationers often had little reason to venture there. They’d pack coolers full of food for the week to avoid the limited options of area grocery stores. As lakefront property developed over the years, small commercial districts have sprung up around crossroads next to the lake.

Littleton was getting left behind. But those travel patterns have begun to change in the past year or two. First, the COVID-19 pandemic caused many second-home owners to stay at Lake Gaston full time.

“We are seeing the dynamics change around here pretty quickly,” says Leanne Patrick, who leads the Lake Gaston Regional Chamber of Commerce. “Second homes are becoming more appealing as a primary residence.”

That meant venturing into Littleton at the same time the Fitts family was opening its first two storefronts in early 2021: Daphne’s Coffee Shop and Main Street Wines. Both sought to create community gathering spaces in renovated storefronts that had been vacant or full of junk for years.

The Blue Jay Bistro restaurant next door proved to be a heavier lift. The Fittses had to recruit a chef and manager from outside the area, since there were no comparable restaurants nearby.

They selected Chef Ashleigh Fleming, who’d previously served as executive chef at UNC Chapel Hill’s Carolina Club. She and other key managers were lured in part by the chance to live in lakeside houses owned by the Fittses.

“When we first got started, everybody said, ‘You’re never gonna be able to hire the talent you need. Nobody’s going to want to live in Littleton,’” Deb Fitts says.

About 25 of the 30 employees hired for the Fitts projects are locals, fulfilling a goal of providing local jobs. Servers at the restaurant went through a two-week training program, and the Blue Jay Bistro opened in August with limited capacity. Reservations were quickly booked weeks into the future. The folks drawn to Littleton for the food, wine and coffee are also stopping by other shops and businesses.

A few doors down, Wanda Clark has run a boutique gift shop called Once Upon a County Line for about five years. Sales doubled in 2020. She has added a second storefront that showcases home furnishings, gourmet food and fresh flowers.

“Before there were only two shops in town, and now there’s about eight,” she says. “The climate is joyful optimism.”

Similar projects elsewhere couldn’t work without “gaining the commitment from the town itself,” Deb Fitts says. 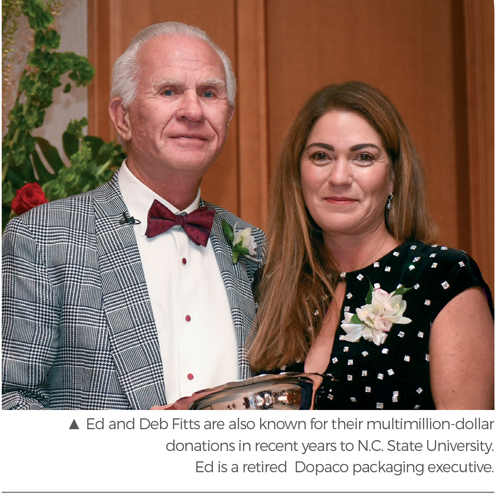 The next Fitts projects are the renovation of neighboring buildings on Main Street into an art gallery/office space and the new Timber Waters Brewing Co.

The latter is expected to open in late 2022, but the couple have already bought the brewing equipment and hired a head brewer from a prominent North Carolina brewery. It’ll serve pub food and distribute beer well beyond Littleton.

Those projects seem small compared with the school renovation. The old building was in such a state of disrepair — the Fitts foundation bought it for just $246,000, property records show — that it would have been cheaper to tear it down and start from scratch.

But for Ed Fitts and many Littleton High alumni, it’s worth it to preserve the two-story columned building that dates to 1940. In renovating the gym, workers discovered the old electronic scoreboard hidden in the boiler room. It’s now been restored to its original glory.

“It’s going to just give the community an opportunity to express themselves but also bring in outside talent that will bring in traffic and tourism,” the chamber’s Patrick says. “It’s going to put Littleton and Lake Gaston on the map as an entertainment hub.”

Littleton Academy will welcome its first students next fall, initially elementary grades only but eventually adding middle and high school grades. The plan is to have nearly a third of the student body receive scholarships to help pay the annual $10,000 tuition.

“The only reason why we need it to be private is so that we have the flexibility to be able to teach the way that children need to be taught,” she says. “And you don’t have that when you’re working with a charter school or public school.” 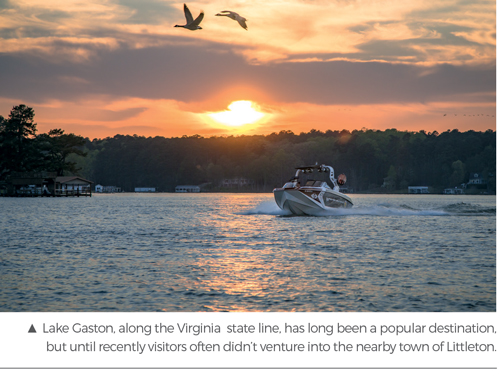 The school’s focus will be vocational skills, teaching subjects like heating and air conditioning and plumbing that will enable students to find jobs and start businesses without a college degree.

Clark says Littleton Academy will provide a missing education option for families who discovered the area on vacation and want to move to the Lake Gaston area full time. Littleton, which sits on the county line between Halifax and Warren counties, has no schools. The nearest public schools are near Roanoke Rapids, about 10 miles from Littleton and even farther from the lake.

With so many developments occurring so quickly, the atmosphere in Littleton has shifted too.

“The overall general feel is it’s a renaissance,” Clark says. She even notices it in her walks through the town’s quiet neighborhoods. “We used to walk and pick up litter. You don’t have to do that anymore.” ■

Up front: Making a good sandwich