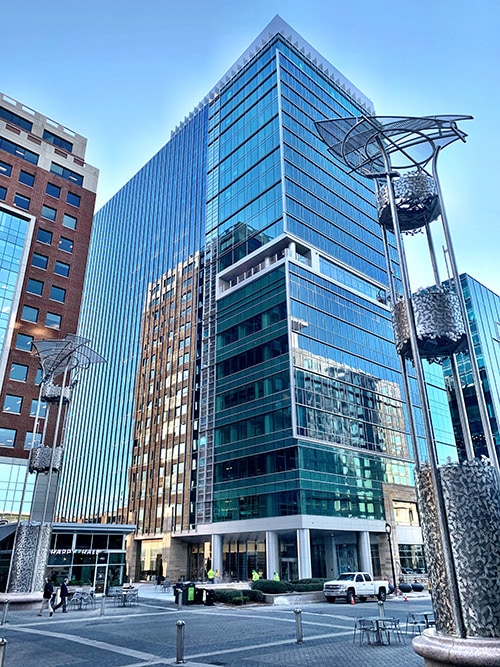 “We are thrilled to open this project on time and on budget as this day is not only monumental for the entire development team, but also for the City of Raleigh,” DRP CEO Andrews said in a statement. More than 2,000 people took part in planning and constructing the building, which is partly owned by a New York Life Insurance Co. subsidiary.

The tower is adjacent to the Raleigh Convention Center and Marriott City Center hotel. It includes 156,000 square feet of office space and 239 apartments called The Faye at 511 Fayetteville Street. Monthly rent runs from $1,145 to $3,900 a month, according to Apartments.com.

The McGuire Woods Law Firm and DRP have signed leases for office space, joining FNB, which is taking 40,000 square feet.

“Andy has set the bar for quality, mixed-use, green development, bringing together Fayetteville’s past and future,” Raleigh Mayor Mary Anne Baldwin said in a press release.

DRP is also developing a 29-story tower, also anchored by FNB, in downtown Charlotte. It is slated to have 156,000 square feet of office space and 196 apartments.