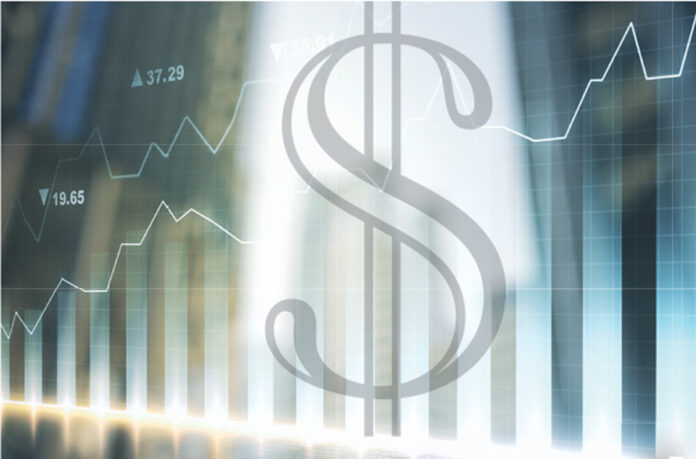 The stars aligned for bank and credit union profits last year, contributing to a record year for many institutions.

Business North Carolina’s annual list of the state’s 50 biggest banks and credit unions shows more than half of the institutions reported profit gains of more than 50%.

No one expects another PPP effort, while soaring mortgage rates are expected  to cool the housing market. Banks must find other ways to profit this year.

The rankings are based on information supplied by New York-based S&P Global Market Intelligence.

Here are 10 institutions that made news in the last year.

The nation’s biggest family-controlled bank completed its largest acquisition on Jan. 3, essentially doubling in size with the $2.2 billion purchase of CIT Group. It puts First Citizens among the 20 largest U.S. banks with more than 600 branches in 22 states.

In September, Jim Hayes became the third CEO since
1979 at the second-largest U.S. credit union, which has more than $50 billion in assets. A former chief of a much smaller federal credit union near Baltimore, Hayes pledges to improve the institution’s digital platform and add new products for the 2.6 million members.

The fast-growing company that specializes in Small Business Administration loans is among the state’s most volatile stocks. Its total return tops the state’s publicly traded banks over the last three years, even though its stock slumped 35% in the year ended May 6. In addition to strong revenue growth, Live Oak booked a $120 million gain in the first quarter by selling its Finaxct investment to Fiserv.

CEO Chuck Purvis announced plans to retire next March after leading the second-largest N.C. credit union since 2012. Formed by eight IBM employees in 1967, it how has more than $4.6 billion in assets and about 23 offices in central North Carolina. It expanded beyond IBM employees in 1991.

The Winston-Salem-based institution continues its aggressive approach that has boosted its membership by 40% since 2016 to more than 280,000. It plans to add about 100 staffers to its 920-employee payroll this year, some of them joining the new operations center at Hanes Mall scheduled to open this fall.

The Rocky Mount-based bank raised $115 million in April, marking the largest private placement with local investors in N.C. history, CEO Ron Day says. The bank expects to end the year with nine offices including new branches in Greenville, S.C. and Atlanta. It has been among the state’s fastest growing community banks since an investor group led by Day acquired the institution in 2012.

Located in one of the state’s most affluent areas, the Mooresville-based bank has five offices in suburban Charlotte and one in Morehead City. The bank was started in 2008 amid the housing recession, but now has some of the state’s strongest profit margins and operating efficiencies among its peer banks, CEO Joe Marshall Jr. notes in the 2021 annual report. The bank’s board is chaired by Kelley Earnhardt Miller, sister of Dale Earnhardt Jr. and his partner in the JR Motorsports NASCAR team.

FINANCIAL50
LARGEST BANKS AND CREDIT UNIONS BASED IN NORTH CAROLINA

Soaring stocks and bonds made 2021 a great year for most money managers, as is shown in our annual listing of the largest advisers based in North Carolina. Two-thirds of the companies on the list reported more than 20% gains in assets under management, reflecting higher asset values and client additions.

Unfortunately, the music stopped this year with the S&P 500 slumping 17%, the Nasdaq plunging 25% and bond prices declining at press time in mid-May. The Russian invasion of Ukraine, skyrocketing inflation and prospects of a recession spooked investors. Some selling stemmed from profit taking after three years of double-digit gains in stock-market indices.

The data is based on the companies’ most recent annual filings with the U.S. Securities and Exchange Commission, which provides snapshots of the number of employees, assets under management and key owners.

Private-equity groups and large asset managers based outside North Carolina are not included in the list. That’s why advisers affiliated with major companies such as Fidelity and Morgan Stanley are not listed.

Among the groups showing 50%-plus gains in assets from a year earlier were Biltmore Family Office and Adhesion Wealth Advisors of Charlotte, Salem Investment Counselors of Winston-Salem and Cornerstone Advisors of Asheville.

No. 1 ranked CapFinancial Partners, which is the parent of Captrust Financial, reported a 46% increase. 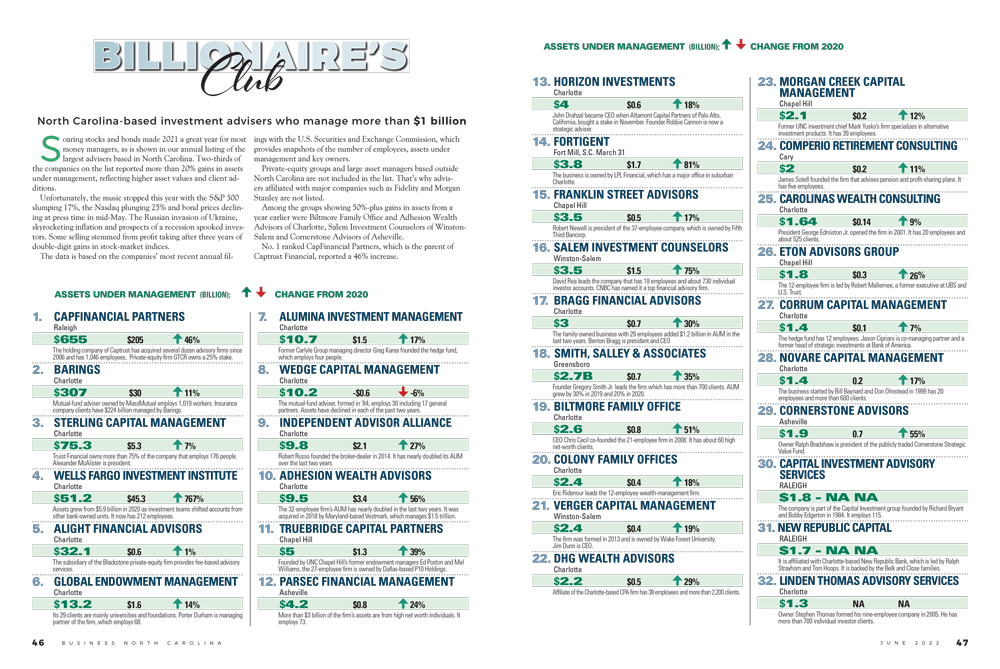 David Mildenberg - 06/15/2022 0
Someone wants to add toll lanes to the often-congested stretch of Interstate 77 between center-city Charlotte and the South Carolina state line. But that party doesn’t want its name in the public yet. So...
Read more
Share
Facebook
Twitter
Linkedin
Email
Previous articleNorth Carolina’s most important Civil War battlefield shifts with the times
Next articleCharlotte’s Driven Brands accelerates push for leadership in U.S. auto service