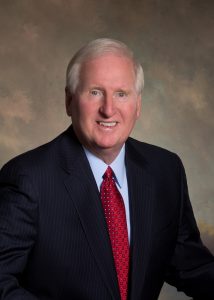 Larry Wooten, one of Raleigh’s most influential insiders, is retiring as the N.C. Farm Bureau president in December after 20 years in the post.

“The organization is in good shape and I felt like the time was right,” he said in an interview. “There comes a time when you need to make room for new leadership.”

Wooten, 67, has been the state ag industry’s go-to leader for many years, probably holding as much influence among farmers as N.C. Agriculture Commissioner Steve Troxler, says Brad Crone, a Raleigh campaign consultant. Troxler is an elected official.

The Farm Bureau’s clout stems from having affiliates and office in each of North Carolina’s 100 counties, more than 570,000 member families and an insurance company that sells more home, auto and other property-casualty lines than anyone except State Farm and Nationwide, according to N.C. Department of Insurance filings. Including family members, more than 1 million North Carolinians — 10% of the state population — have ties to the organization.

The day-to-day operations of N.C. Farm Bureau Mutual Insurance Co. are led by Executive Vice President, Steve Carroll, who reports to a 12-member board led by Wooten. Its premium revenue has increased 22% to $1.1 billion over the last five years, the company’s filings show. The company has about 850 salespeople.

Wooten’s more public role has involved lobbying on farm matters at the N.C. General Assembly and in Washington, D.C. While each commodity group has its own organization, the Farm Bureau works to keep relations harmonious with lawmakers and the agriculture community, Wooten says.

His successor will be elected at the group’s annual meeting in Greensboro in December. The event hosts 600 voting delegates. While industry insiders say Farm Bureau leaders have lined up a successor, Wooten declined to share a name.

“We have a very good process for selecting a president and it doesn’t involve a big campaign,” he says.

Farm Bureau rules require the president to be a farmer. Wooten raised tobacco and other crops in Pender County from 1973-94 before becoming assistant to the association’s president. He succeeded W.B. Jenkins in 1999.

Wooten says he’s keeping his options open after leaving the trade group. “My plan isn’t to retire. I want to continue to have a voice in this great state,” he says.