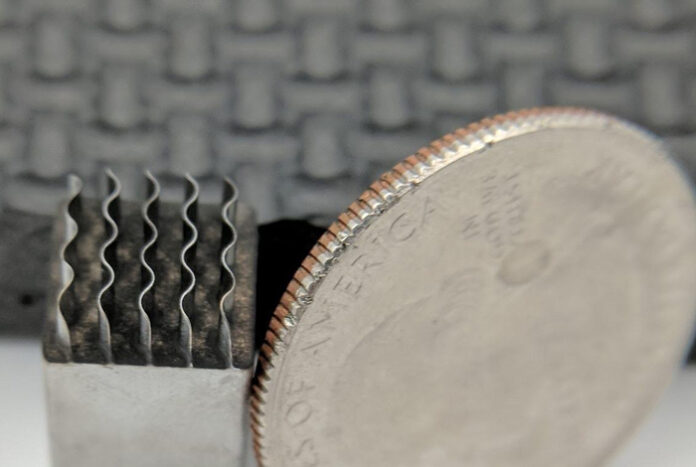 North Carolina has a lot of smart people who have started science-based companies. They do very complicated things. One of these is Voxel Innovations, a Raleigh startup. It is a small manufacturing company, which makes it interesting.  A lot of what you hear about are startups where folks are writing code or developing new drugs.  Voxel is part of one possible future of American manufacturing: technologically advanced companies with skilled workforces that are not easily displaced by low-wage competitors around the globe.

Voxel specializes in pulsed electrochemical machining (PECM).  Voxel’s niche is  manufacturing difficult-to-make parts out of the alloys that are used in implants, surgical tools, turbines and aerospace. These are high-value components with very tight tolerances. One interesting feature of PECM is that the tool isn’t touching the metal it is working on, unlike more conventional machining.  The work is being done by electricity and chemistry. That is what makes it a better manufacturing process in certain situations, and that is what makes it hard to do.

Voxel’s CEO Daniel Herrington explained: “You create a cathode or electrode tool that’s roughly the inverse of the part you’re trying to make. You move it very close to the work piece. In our case, it might be 10 or 20 micrometers away, just a thousandth of an inch. So, we’re looking at a fraction of a human hair.

“At that distance, in between those two metal surfaces, our cathode tool and the workpiece anode, we have a film of electrolyte – and that’s conductive salt water – so that allows us to pass current through that loop there.” So, for example, a metal like iron on the surface of the piece being machined is bonded to oxygen, creating a metal oxide – rust. “So, we’re essentially rusting or corroding the surface of these workpieces at a very high rate.”

Electrochemical machining was traditionally good at bulk removal of metal alloys. Pulsed electrochemical machining “lends a new degree of precision to the process,” says Herrington. It is removing metal in an exacting manner, creating the hole or slot or whatever difficult feature in a difficult metal, and leaving pristine surfaces, which eliminates the need for further finishing. The material is flushed from the work area as the component is machined.

Unlike conventional machining, where you are swapping out tools and maybe creating one hole at a time, the PECM tool is made for the piece it is machining. It can do a lot of operations at once.  “It’s not good for onesie, twosies, but if you want to make a thousand or millions of parts a year, this process becomes way more economical, more valuable, and that’s the kind of markets we focus on. Higher value and higher-volume applications.”

Because the tool isn’t actually touching the metal, it lasts longer, which is a big deal for high-volume runs.  You’re not spending a lot of money replacing worn-out tools.

“When you think about many manufacturing methods, it’s essentially doing one operation at a time,” says Herrington.  So CNC [computer numerical control] machining, [if] you have to drill 100 holes, you have to go one hole, two holes three holes . . . our process, the entire electro surface is active at the same time. We would never drill one hole at a time if we could avoid it.  We would drill all 100 holes at the same time, or all 1,000 holes at the same time. What that means for us is that we can do some things to get higher throughput and therefore economies. CNC machines have great flexibility because you can swap in a different tool, it can move wherever you want it.  But we can essentially make all that complexity into a tool.”

What stage it is in

Voxel is a seven-year-old company.  Herrington started by building a prototype in a garage, like many startups. He raised some “friends and family” money, debt that converts in a formal equity round later this year. He has secured around $1 million from the Air Force, Navy and NASA, mostly in Small Business Innovation Research grants.  This is significant because one of the state’s objectives is to encourage young, innovative companies to seek such grants from DOD and NASA.

His company has eight employees and he is looking to add several more.  Voxel is located in 6,600 square feet in a flex building just north of the Raleigh Beltline, and he needs four times that amount. It will probably take all of this year to find and upfit new quarters.

“We’re in the stage now where we’ve got some customers that are just starting to do production with us,” he says.

Herrington, 35, grew up in Winston-Salem, and studied mechanical engineering at N.C. State, graduating with a bachelor’s degree in 2009.  He also has a master’s in engineering management from Duke. If you Google him, you will come up with a Wikipedia page about Herrington the race car driver.

As a teenager, he convinced his father, a cardiologist, to join him at a racing school in Florida.  Daniel Herrington had an aptitude for racing, and over several years, rose to the Indy Lights series, just shy of the big leagues of U.S. open-wheel racing.  He won a race at the Chicagoland Speedway not long after graduating from N.C. State. (The guy who finished half a second behind Herrington in that race nearly won the Indianapolis 500 two years later.)

But professional racing is an expensive sport, and sponsors were hard to attract during the recession. Herrington decided to go to graduate school. After getting his masters, he got a job with the federal Advanced Research Projects Agency-Energy.  This is where he started thinking about how innovative manufacturing could impact different markets.

While working with a company that made gas turbine blades, he was exposed to electrochemical machining.

“Hardly any university in the U.S. teaches about this process,” he says. Most companies that are using the process are in Europe.

“They were using this electrochemical process to do one thing and one thing only. That’s to make holes in turbine blades for industrial gas turbine engines,” he says. “But it did it really well. And that sort of led me to learn more about what people were doing in Europe with this process.

“And then you start thinking, wow, they’re doing some more interesting things in Europe than we are in the U.S. Surely, there’s a market just to bring basically what’s done elsewhere to the U.S.  But beyond that, the reason for starting a business is, can we help change the narrative on this technology.  Can we make it easier, solve some of the technical challenges that are the reasons why it’s difficult. Because then you can start deploying this technology to more industries, more applications, without needing a $5 million investment to sort of figure it out for one application.”

So, for example, if you are trying to find a better way of machining alloys for hypersonic aircraft or surgical instruments, PECM has advantages and is gaining traction. There are no burrs — stray pieces of metal left from conventional machining.  You can make delicate, thin-walled components because you’re not hitting the metal with a physical tool. The hardness of metal is not a problem.

Herrington worked on one of the military projects with Charles Parker, who runs the Nanomaterial and Thin Films Lab at Duke University’s engineering school. Parker met Herrington through Jeff Glass, a Duke engineering professor who is on Voxel’s advisory board.

“[Herrington] really seems to know about the markets,” says Parker, “and what the process can do and what it can’t do.”

David Mildenberg - 06/15/2022 0
Someone wants to add toll lanes to the often-congested stretch of Interstate 77 between center-city Charlotte and the South Carolina state line. But that party doesn’t want its name in the public yet. So...
Read more
Share
Facebook
Twitter
Linkedin
Email
Previous articleLowes Foods tests a new approach in north Meck
Next articleOp/ed: Are extreme partisanship and uncertainty now N.C. hallmarks?