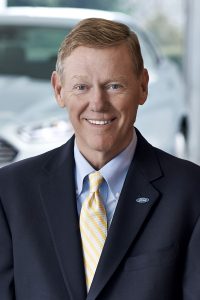 A 72-year-old who exudes the energy of a teenager, Alan Mulally fired up a Greensboro crowd last week with a talk suggesting he’s enjoying his post-Ford Motor Co. career.

As keynote speaker at the Wyndham Tournament’s annual kickoff breakfast last week, Mulally explained how he led a turnaround at Ford between 2008-14.

Short version: The CEO got the company’s embattled management team focused on the same issues, shrunk its brands from 98 to 17 and instituted rigorous accountability measures. The results returned a company that reported a $17 billion annual loss in the recession into one of the world’s most respected manufacturers. Ford has reported a cumulative $13 billion net profit over the last three years and sports three of the world’s six most popular car models, he said.

But Mulally stretched beyond turnaround skills in responses to questions from the crowd of more than 300 business and political leaders.

Asked about the robust market values of Facebook, Amazon and other tech-industry high flyers, he said, “I think we’re going to see an unbelievable coming together of all of these companies.” He was referencing how they are increasingly entering each other’s turf, both in technology and strategic moves such as Amazon’s and Netflix’s emphasis on creative original video content. (Mulally is a director of Google.)

Investors largely base investment decisions on future cash flow projections, often more than current profitability, he noted. He cited Amazon for its strategy that foregoes immediate gains for long-term success.

Still, he said it is “hard to justify” the current market valuations of some high-flyers. He questioned whether ride-hailing company Uber Technologies can post a profit given its business model. Perhaps relying on autonomous vehicles, thereby sidestepping the cost of human drivers, might enable Uber to make money, he said.

Asked about electric-vehicle maker Tesla, he said “the business model they have will never make any money.” (Tesla’s market value of $56 billion exceeds Ford’s $41 billion.)

But he added that Tesla CEO Elon Musk is focused on a big picture in which electric-power products play a wider role in commerce. He noted that Ford relied on electric power in the 19th century, before the development of internal combustion engines, and that much electricity for Teslas and other vehicles is produced by unpopular coal-fired power plants.

While he said “electric cars are the future,” Mulally said no manufacturer is making a profit selling electric vehicles. For that to change, significant technological breakthroughs are needed, along with a coherent national energy “so we all know where we are going.”

Asked why he left Ford when the company’s performance was excelling — and why its stock has since slumped sharply — Mulally said it “felt like a really good time to retire” and that it was time for “a few folks we had developed” to take over. He praised Ford Executive Chairman Bill Ford’s leadership skills and vision for the company.

Mulally’s successor, Mark Fields, was fired in May and replaced by former Steelcase CEO Jim Hackett amid a slumping stock price. Mulally did not directly address Fields’ departure.

Asked about trade issues, Mulally praised the North American Free Trade Agreement as a net positive but needing improvement. Negotiators need to address currency exchange rate manipulation, which he called “devastating to everybody.”

Mulally also mixed considerable humor into this comments. During an initial news conference at Ford, he was asked if he felt pressure as the first auto-industry outsider to head the Dearborn, Mich.-based company. Mulally had spent the previous 37 years at Boeing, taking key roles in the development of every 700-class jet produced in company history. While the average car has about 10,000 parts, a Boeing 777 has 4 million, he said. “And it stays in the air.”