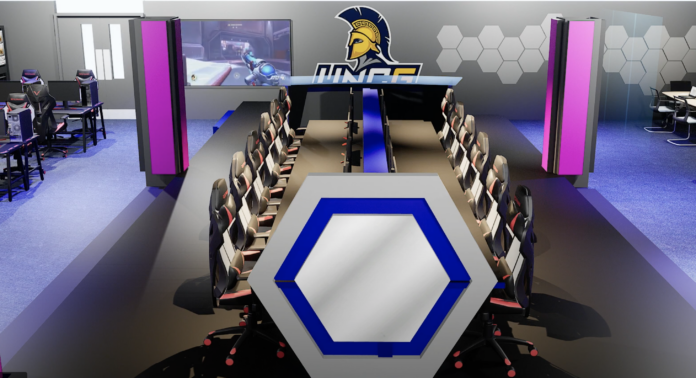 Rep. Jason Saine took his family to Queens, N.Y., a few years ago because his son wanted to see the world championship for the popular video game Fornite. He says it made for a fun vacation, but he kept wondering why the event couldn’t be held in North Carolina instead.

“I’m sitting there going, ‘Epic Games, based in Cary, N.C., has their championships in New York – we should have that,’” he said.

So as a top House budget writer in a year when the state is flush with cash, Saine pushed for funding to make North Carolina a bigger player in the growing esports industry.

The budget that Gov. Roy Cooper signed into law last week will spend a total of $28.4 million over two years to build infrastructure to host esports at two state universities and create an incentives program to lure big tournaments and other events here.

The N.C. Department of Commerce will oversee the new Esports Industry Grant Fund, which will hand out $5 million per year to esports event producers spending at least $250,000 here, reimbursing up to 25% of their expenses.

Events that employ a large number of North Carolina residents and draw the most in-person spectators will get priority for the grants. The events can’t include “obscene” material or involve a political campaign.

“It is a ‘build it and they will come’ – they’re going somewhere, and if we’re that much more of a friendly market, we can continue to grow that,” Saine said.

He sees potential for esports events at some of the state’s largest venues, like PNC Arena in Raleigh and Spectrum Center in Charlotte. But he says smaller events in smaller towns are possible too, and the budget money heading to UNC Greensboro and N.C. State for their esports programs could also lead to new venues.

UNC Greensboro will get $2.4 million for equipment, technology and marketing to building an on-campus esports facility. It’s already home to a non-credit certificate program for students looking to make a career in esports, and earlier this year, it announced plans to build a 3,300-square-foot gaming center on campus with video walls and dozens of gaming computers.

Current classes teach how to plan a successful esports tournament, how to keep fans engaged, and how to develop lucrative sponsorship classes. UNCG’s program notes on its website that esports generates more than $1 billion in annual revenue worldwide and draws viewer numbers that are “second only to the NFL.”

“We believe we can create over time a comprehensive set of academic, social, and cultural experiences around esports at UNCG that adheres to our fundamental principles of delivering opportunity, excellence, and access to a vast array of students from a wide range of backgrounds and experiences,” UNCG Chancellor Franklin Gilliam said in news release earlier this year.

N.C. State is not as far along in developing esports programming, but it will get $12 million over two years to build an esports facility and $4 million for an esports “mobile arena truck.”

The university currently fields a varsity team that competes with other colleges and universities in the video game League of Legends; the team finished in the top eight in North America in 2019.

“Our universities know how to do it, from production, the film side of it, graphic arts, and of course programming,” Saine said. “I’m really excited about it for those schools that we’re going to keep investing in that.”

N.C. State and UNCG aren’t the only North Carolina colleges and universities involved in esports. Fayetteville State University offers an esports minor and has a gaming facility on campus, and earlier this year, FSU student Ahmahd Moore won the HBCU ESports League Championship for the game NBA2K.

Several private institutions are also building esports offerings. Carolina University in Winston-Salem has an esports major within its business administration program. Barton College in Wilson has a number of esports teams – some of which even have scholarships for players – and an esports arena on campus.

The esports funding in the state budget was originally in House Bill 945, which got positive votes in committee hearings back in June. That legislation had envisioned a tax credit program for events, but the final budget bill sets it up as a grant fund instead. The Department of Commerce is tasked with developing additional guidelines for awarding the grants.