Enrollment at North Carolina’s community colleges is declining, based on full-time equivalencies. In some cases, its plummeting. It’s happening in a state that has added more than 850,000 people since 2010 — and one that prides itself on having one of the nation’s finest systems of two-year institutions.

An N.C. Community Colleges System task force met last week in Pinehurst to discuss how to reverse the decline, prompting a story by Education NC’s Alex Granados that included the chart information below showing significant decreases in enrollment at many institutions since 2007. That year was selected because it was just before the recession that slammed North Carolina and most other states, a system official says.  When times were hard, community college enrollment increased, peaking in 2010. But things started a slide when N.C. employment started improving, albeit mostly in the state’s metro areas, and the jobless rate is now near record-low levels. Unfortunately, fewer people have jobs in many N.C. counties than a decade ago, mirroring declining rural populations.

Overall, statewide community college enrollment slumped 2% in terms of full-time equivalencies. But as Granados notes, exclude the remarkable 60% growth at Wake Technical Community College and the decline is 6%. Twenty-five colleges reported declines of 10% or more, including 16 with 20% or more.

The situation would have been worse had the state not started a large number of Early College programs in which high school students take courses at the local two-year campuses. The second chart below shows the enrollment changes excluding Early College students.

Unlike the centrally managed University of North Carolina System, North Carolina’s 58 community colleges operate more independently with more local control. Talk of consolidation has circulated for years, but never progresses because the institutions are deemed so vital to local workforce development efforts. 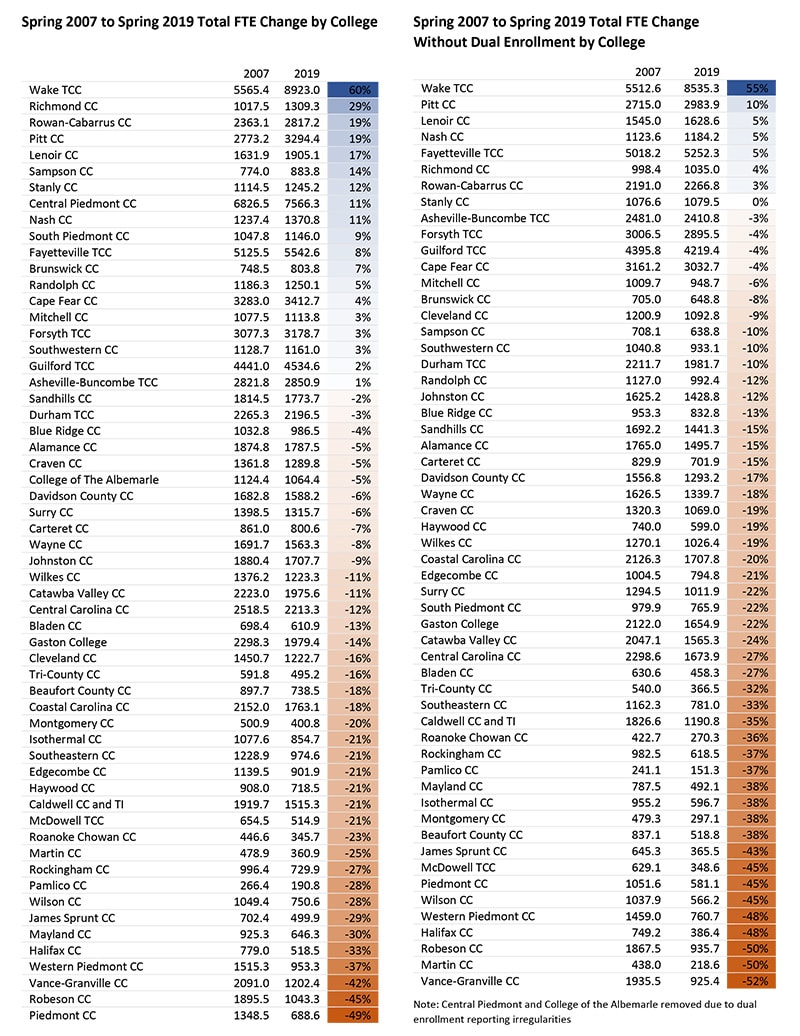