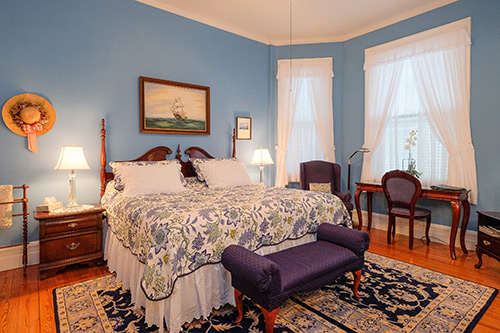 Cheryl Orr searched the Carolinas for the right home to start a bed-and-breakfast business. By chance, she found a Queen Anne Victorian brick house built in 1900 on the edge of Edenton, one of North Carolina’s most historic towns. After renovating, she opened The Cotton Gin Inn with seven rooms in October 2016.

“The town is a tight-knit community,” Orr says. “It’s very welcoming and open [and] really supports one another. It’s been a great experience.”

It’s been too welcoming and open for some, however. Four inns within the town of Edenton and Chowan County compete with more than 30 short-term rentals listed on sites such as Airbnb and VRBO. Some say it’s an unfair competition. Right now, those rentals don’t have to meet the same health and safety requirements as the traditional hospitality industry. That uneven playing field is sparking contention between hoteliers and property owners in many N.C. towns popular with tourists.

“Unregulated lodging properties like Airbnb that operate in residential neighborhoods are sometimes disruptive to communities and pose serious safety concerns for guests, communities and neighborhoods,” says Lynn Minges, president and CEO of the N.C. Restaurant & Lodging Association. “Guests have no way of verifying whether these properties are compliant with basic health and safety standards, like smoke and carbon monoxide detectors, fire escapes and wheelchair ramps.”

Edenton, named for former Gov. Charles Eden, was founded in 1722 on the inner banks of the Albemarle Sound. The capital of North Carolina from 1722 to 1743, it now has about 5,000 residents, while Chowan County’s population is 15,000.

To remain profitable, B&B owners seek other revenue streams. Diane and Don Pariseau own Captain’s Quarters Inn, a Greek Revival-style home. They supplement the inn’s income with a Saturday night supper club and a two-day rib-cooking class, both open to the public. They sell barbecue sandwiches on Saturdays and host a mystery weekend in the fall and spring. Other Edenton B&Bs, including The Cotton Gin Inn, teach cooking classes and host weddings and private dinners.

“We received some complaints through our tourism and development authority from the traditional hospitality industry [asking about] how local government is treating local Airbnbs,” says Elizabeth Bryant, Edenton’s director of planning and community development.

Town leaders researched the best practices for overseeing rentals. Regulations of other tourism-heavy N.C. cities such as Asheville, Blowing Rock and Wilmington didn’t seem to fit their town. Bryant consulted with the town council and B&B and rental-property owners to determine what might work for Edenton.

“[The town council’s] primary concern was safety,” Bryant says. “Do these properties have smoke detectors? What measure of assurance can renters have that their property is as safe as a hotel room or a bed-and-breakfast? Are there some basic requirements we can put in place that would ensure public safety?”

UNC Chapel Hill’s School of Government helped draft an ordinance for the town that includes an application process for new short-term rental owners. The ordinance being considered by Edenton’s council would force new rental properties to follow a noise ordinance, install smoke detectors, pay for liability insurance and inform neighbors of the intention to rent. It also addresses parking, trash and recycling, and fire and safety inspections. Action was pending in late November.

Cynthia Harding has offered a one-bedroom apartment above her Edenton home’s detached garage through Airbnb for the last year. Such rentals give tourists more options and privacy than provided by traditional lodging options, she says. Harding, who moved to the town in 2012, expects the ordinance to discourage short-term rentals.

Attempts to pass legislation to prohibit local governments from setting regulations for short-term rentals failed at the N.C. General Assembly this year, which Minges deemed a positive result. State lawmakers passed the Vacation Rental Act in 2015 to regulate the varying interests of landlords, tenants and brokers, but it doesn’t mention municipal regulations.

“After multiple failed attempts by Airbnb lobbyists to pass legislation that would preempt that local authority, notably without necessary stakeholder input, we believe that this issue will not return this year,” she says. “We do not oppose short-term rentals, but we maintain that they should be subject to rules and regulations that level the playing field with other lodging properties.”

Instead of waiting on an ordinance, Orr decided on another strategy. “I can’t beat them,” the innkeeper says. “So I joined Airbnb and VRBO, but it’s less expensive to book directly through me.”