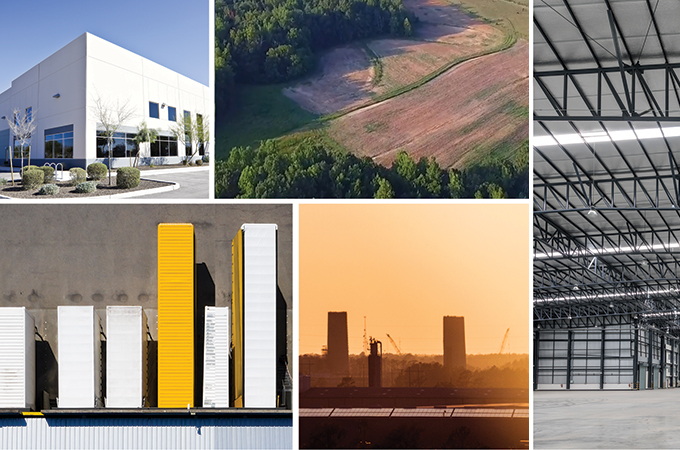 It was a busy two months for North Carolina economic development news. Toyota announced it was building a $1.3 billion lithium-battery factory at the 1,800-acre Greensboro-Randolph Megasite in December. It’s expected to employ about 1,750 people and help meet growing demand for electric vehicles. About a month later and roughly 30 miles away, Boom Supersonic unveiled plans for a $500 million commercial aircraft factory, which will create almost 1,800 jobs initially, on Piedmont Triad International Airport’s campus.

Greensboro Chamber of Commerce president and CEO Brent Christensen doesn’t hide his excitement for the two large undertakings. “Projects like these come along every five or 10 years, and we had two announcements within six weeks,” he says. “Frankly, those in the economic development world would kill for even one of them.”

North Carolina’s industrial parks are eyed by manufacturers and companies from other industries that are starting, expanding or relocating. “One of the great things about our state is the diversity of its business base,” says Melissa Smith, vice president of business recruitment and development for Economic Development Partnership of North Carolina. “We have a lot of sector diversity in the business in our pipeline and in corporations that have announced and that are already here.”

Each company has its reasons for choosing North Carolina. But most point to the state’s workforce, which is developed and trained by robust university and community college systems. And many find a shorter path to being operational. Smith says many industrial sites, including megasites in Chatham, Brunswick, Edgecombe, New Hanover and Randolph counties, are shovel ready — utilities, access to rail, road and airports, and other necessities are already in place. “Everything that drives our conversations with companies looking to locate new operations is all about speed to market and risk reduction,” she says. “So, having sites and buildings or real estate options that are ready to go helps [companies] feel confident that part of the work has already been done or is scheduled.”

If the Toyota plant is a big deal for Guilford County, it’s even better for Randolph County, its residents and workers. “First of all, having that many new jobs in the community with strong wages and great benefits gives Randolph County residents an opportunity to improve their lives,” says Kevin Franklin, Randolph County EDC president. He expects other businesses to follow, becoming links in Toyota’s supply chain. They’ll bring more retail and service businesses to meet the needs of a growing population. “That’s additional jobs, and additional sales tax income for our community,” he says. “It’s already making an impact with approximately 1,500 new residential dwellings approved for the Archdale Trinity area.”

Randolph County has a long tradition of manufacturing. It began with textile mills and has incorporated furniture factories, machining operations and others through the years. About a third of its workforce is employed within the industry as of December 2021, according to Randolph County EDC. But there is room for more. “We are at work getting other sites ready for market, too,” Franklin says. “We have a 35-acre site in Archdale and are in the process of preparing about 160 acres in the Randleman area.”

Randolph County officials and engineers are working on a development study that will identify other tracts of land suitable for industrial development. While this is good news for companies looking to locate there, the state’s six other megasites and 20 other certified sites also are ready. “We have a number of great sites in the 500-acre range, good for advanced manufacturing and life sciences,” Smith says.

Chatham County is positioning itself as a biotechnology and life sciences hub, says Michael Smith, Chatham County EDC’s president. It’s two megasites — Chatham-Siler City Advanced Manufacturing and Triangle Innovation Point — offer more than 4,000 acres combined of shovel-ready land that’s a short hop from Research Triangle Park. And U.S. 1 from about Holly Springs in Wake County, through Chatham County to Sanford in Lee County, is developing a reputation as a biotechnology corridor. The stretch has already attracted six major pharmaceutical companies — Pfizer, FUJIFILM Diosynth, Abzena, Amgen, Audentes Therapeutics and Sequiris. “We feel we have a shot at it being a pretty unique transformational year here in Chatham County,” says Smith. “We’ve got those two [megasites] and great elected leadership that wants to see the right kind of growth.”

As in Randolph County, more is planned in Chatham County. Chatham Park, a 7,100-acre mixed-used development is underway in Pittsboro. It could have 22,000 homes and as many as 60,000 residents. It’s expected to have 22 million square feet of office, research, retail and community space when it’s completed in 2045.

Across the state, most economic growth is coming from businesses in biotechnology and life sciences, food and beverage production, and automotive parts manufacturing, says EDPNC’s Smith. And not all of it is happening in urban centers. “We’ve got a lot of great partners that help communities be strategic in where they make those investments and help push development out to some of the perimeter locations,” she says.

Carolina Gateway Partnership, which spearheads economic development in Edgecombe and Nash counties, for example, has assembled a cluster of local and international food-processing companies. They include Cheesecake Factory Bakery, Atlantic Natural Foods, Nutkao, Poppies International, Butterfields Candy, Braswell Foods and George’s Barbecue Sauces. “We have seen a substantial increase in food and beverage projects over the last year, and Nash County continues to serve as a premier location for these opportunities,” EDPNC’s Smith says. “It demonstrates that industrial development, which has been the focus of counties and local communities laying important groundwork is paying off.”

Strategic partnerships are spurring economic development statewide. “The Rural Infrastructure Authority, the Golden LEAF Foundation and the North Carolina Railroad Co. have been great partners to help some of the rural areas,” EDPNC’s Smith says. Gov. Cooper announced 10 Rural Infrastructure Authority grants totaling $2.1 million in February. They support a variety of projects, including $400,000 to help Grand Manor Furniture reuse an 800,000-square-foot building in Lenoir, $100,000 to expand Surry Rural Health Center in Mount Airy, and more than $709,000 to help build sewer infrastructure on a 62-acre site in Shelby, where a 100,000-square-foot shell building went up. The projects are expected to create 349 jobs and attract about $31 million in private investment.

While Toyota and Boom Supersonic were announced in short order, most economic development projects are years in the making. “This isn’t a short game, and community leaders must make hard decisions on how to spend limited city and county dollars to pave the way for an enhanced tax base for the future, which takes a lot of vision and guts,” says EDPNC’s Smith. “I think our success and the planning many of our communities have been doing for years and even decades will continue to pay dividends long into the future.” ■