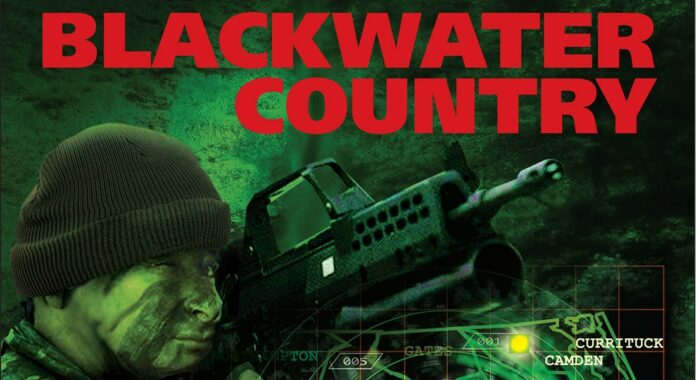 They resonate across the flat landscape as dull thuds that visitors feel in the soles of their feet. In Camden County, that’s the sound of explosions deep within a 7,000-acre Academi compound, where each year, 20,000 trainees practice anti-terrorism tactics, bodyguarding executives and heads of state and, in the case of law-enforcement officers, fighting criminals. Those outbursts also reverberate economically. In 2000, three years after former Navy SEAL Erik Prince formed Blackwater USA, Camden’s median household income was $39,493. Today, Blackwater successor Academi, the county’s largest private employer with about 315 staff members, has been buoyed by fears of international terrorism and other upheavals and fueled by hundreds of millions of dollars in domestic and foreign government contracts. By 2014, Camden’s median income reached $62,194, much of the gain attributable to Academi. The company estimated its annual impact on the region at $425 million in 2015. “They’re the biggest [taxpayer] by far,” says Lisa Anderson, the county’s tax administrator, with $44.7 million in assessed property and an annual tax bill of more than $329,000.

Academi today is a bigger version of the Blackwater that Business North Carolina visited for a cover story in June 2007. After an incident later that year in which Blackwater guards killed 14 Iraqi civilians, the company’s reputation took a beating. Four guards were convicted and are serving long prison terms, while the company paid a $7.5 million fine.

It rebranded as Xe Services in 2009, and in 2010, Prince sold it to investors who created Academi. The company changed its corporate name to Constellis Holdings in 2014 and is being acquired in a buyout led by Apollo Global Management for a reported $1 billion. Prince, 47, heir to an auto-supplier family fortune estimated to top $1 billion, now heads a private-equity company based in Hong Kong.

With a mailing address of Moyock in adjoining Currituck County, Academi’s 66,000-square-foot corporate headquarters can accommodate 1,500 trainees at a time, year-round. The compound, which is about 25 miles south of Norfolk, Va., now includes an airport plus a 6,000-foot unpaved landing strip, a medical center, more than 50 firing ranges, four ship-boarding simulators, explosives training ranges and three parachute drop zones.

Though privately owned with its finances guarded — a Moody’s Investors report estimates annual revenue of $800 million — government contracts have fueled growth. A federal report recently concluded that Academi and predecessors received more than $300 million for counter-drug programs in Afghanistan between 2002 and 2013. Academi earlier this year received a U.S. Special Operations Command contract for engineering and program management and professional services that could be worth up to $900 million through 2020.

With less criticism over private-sector military operations, Constellis and Academi have tried to soften their images by participating in local events and sponsoring family days and open houses at the compound. Particular emphasis is paid to veterans and injured active-duty service members and their families.

China-owned Peak Demand plans to hire 37 people and invest $2.6 million at a manufacturing plant in Wilson. It has three factories in other nations, making insulators, transformers and other products for electric utilities. Plans call for a 50,000-square-foot facility with employees hired over the next three years at salaries averaging about $66,000 a year, compared with Wilson County’s average of about $42,000. A $100,000 state grant hinges on meeting job-creation targets. CEO Jon Rennie and several other Peak Demand managers previously worked for Switzerland-based ABB, which is suing them and Peak Demand in federal court, alleging theft of trade secrets, customers and employees. ABB, which has several manufacturing plants in North Carolina, has a supply agreement with Peak Demand’s owner, Nanjing Zhida Electric. Rennie denies wrongdoing. “We look forward to getting the truth out,” he says.

WILMINGTON — Home sales in New Hanover, Pender and north Brunswick counties soared 30% in August, while the median price declined slightly to about $205,000, a local Realtors group said. The average sales price was about $248,000 in the first eight months this year.

GREENVILLE — East Carolina University named James Hopf chief of staff, reporting to Chancellor Cecil Staton. Hopf has practiced law here since 1990 and served on the Pitt County Board of Education. He succeeds Chris Locklear, who was named vice provost for academic success.