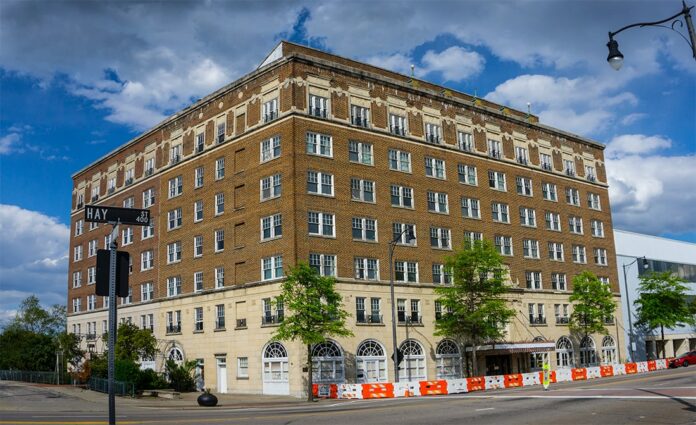 Investors in the former Prince Charles Hotel have big plans for breathing life back into a decaying building that has served as both a shining jewel of downtown Fayetteville — and a topless bar. That sentence may sound familiar: Ones just like it have been written many times as previous efforts to renovate the 1920s hotel failed due to lack of experience or resources.

Lemanski’s Prince Charles Holdings bought the seven-story building at auction for $200,000 more than a year ago. A planned $14 million renovation includes 13,000 square feet of retail space and 62 apartments.

“Similar to many of the communities we are working in, there is a pent-up demand for urban apartments in downtown Fayetteville,” Lemanski says. He declined to say when the work might start.

The iconic building has many stories to tell. Famous visitors have included Amelia Earhart, Mickey Rooney and Babe Ruth. There are darker tales, like when a 1930s police chief was found dead under unresolved circumstances, says Fayetteville historian Bruce Daws.

“There was that period of time when it was highly in vogue. Then there was rock bottom — probably in the late ‘60s or early ‘70s,” Daws says. “That’s when it was occupied by nothing but drug dealers, prostitutes and other types of criminals.”

Lemanski in March began private negotiations with the city for a 10-acre mixed-use project on land adjacent to the hotel that could involve private and public funds. Lemanski anticipates about $50 million in private capital will be spent on the development, which he describes as having “an urban feel that you might find in other larger cities.”

“The Prince Charles is such a symbol of Fayetteville’s past,” said Ted Voorhees in an email four days before he resigned under pressure as city manager. “To bring it back within the context of a new mixed-use activity center will set the tone for major progress moving forward.”

Mayor Nat Robertson says the Prince Charles and adjacent projects will move forward without Voorhees, whom The Fayetteville Observer described as instrumental in attracting the hotel developers. “Mr. Voorhees’ departure will not lessen the enthusiasm this City Council or this community has in getting this project off the ground,” Robertson said in an email.

Cecil Staton was named the 11th chancellor of East Carolina University. He has been interim president of Valdosta State University in Georgia since last year and vice chancellor for extended education in the University System of Georgia since 2014. Staton, 58, was a Georgia state senator from 2005-14. His annual salary of $450,000 will make him the third-highest-paid chancellor in the UNC System, trailing Randy Woodson at N.C. State and Carol Folt at UNC Chapel Hill. He replaces Steve Ballard, who plans to return to a faculty job after 12 years leading the university, which has more than 28,000 students. A first-generation college student, the Greenville, S.C., native has a bachelor’s degree from Furman University, two master’s degrees from Southeastern Baptist Theological Seminary and a doctorate from Oxford University.

LUMBERTON – Alamac Investors will add 14 jobs to its 175 in a $1.1 million expansion at its local textile plant. Once part of WestPoint Pepperell, the Burlington-based company makes knit fabrics for uniforms, military apparel and home furnishings.

DUNN – Select Bank & Trust named W. Keith Betts regional executive for the Brunswick and New Hanover markets. He was CEO and president of Coastal Bank & Trust in Jacksonville, with about $78 million in assets. Select, which has 14 branches and about $816 million in assets, opened its first branch in the Wilmington region in December, acquiring a former Yadkin Bank branch in Leland.

TURKEY – Del Monte Foods will close its plant in Sampson County and 322 workers will lose their jobs. The plant has packaged sweet potatoes, greens, squash and other vegetables since 1991. The work will be consolidated into other U.S. plants.

WRIGHTSVILLE BEACH – Koolbridge Solar plans to make more than 2.5 million shares of common stock available in a direct public offering. The company is developing a residential breaker box that uses solar energy, drawing from the electrical grid only when solar is unavailable.