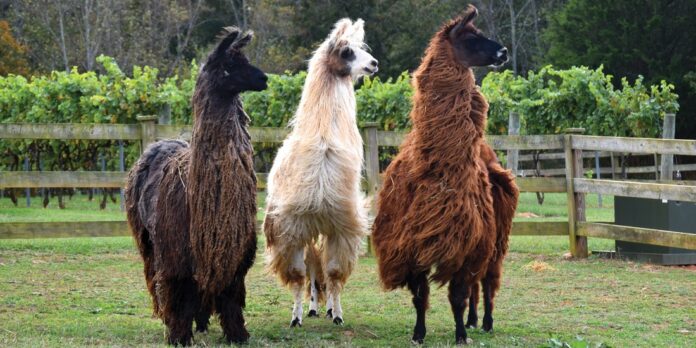 Follow Your Heart, a fluffy white and brown baby llama, blinks his long lashes as his big dark eyes follow the visitors that have just arrived in the Four Ladies & Me Farm barn near Divine Llama Vineyards in rural East Bend. Other llamas approach tentatively, and I hold my hand out, letting them sniff my palm. They snuggle into my fingers and let me pet their soft cotton-candy heads. Owner Michael West smiles.

“Some people think that I don’t know all of their names. But I do. We named every single one, all 66.”

West has a passion for raising llamas. But he also has a love for wine. In 2006, he and his college friend Tom Hughes decided to buy 77 acres of land and combine the two. They planted 5 acres of grapevines next to West’s 65-acre llama farm and officially opened Yadkin County-based Divine Llama Vineyards in the spring of 2009.

Hughes and West met in 1975 as students at Virginia Tech. Both work full time as commercial architects in Winston-Salem — Hughes at Thomas H. Hughes Architecture and West at West & Stem Architects — but manage to find time to balance all the businesses together.

Over the last five years, wine sales at Divine Llama have grown steadily. While West wouldn’t share revenue figures, year-over-year sales increased 40% in 2016 and nearly doubled in 2017, he says. The winery has about 10 part- and full-time employees. Although it is open year-round, it’s typically busiest in the spring and fall.

“On a busy Saturday with good weather, we usually average around 250 people,” West says. “People make a day out of it and walk around the farm.”

Four Ladies & Me Farm is the second-biggest llama farm in the Southeast, according to West. He has built a business breeding and selling llamas, bringing them to shows around the country. He says having the llamas around also has helped build their wine business.

“Llamas are really in vogue right now,” West says. “We’ve seen a huge increase in interest in the past three to five years.”

Divine Llama offers wine tastings, llama yoga and llama treks, where llamas will carry your supplies and accompany you on 2.5 miles of winding hiking trails. The winery also hosts charity events such as the “Tour de Llama,” an annual bike race benefiting Samaritan Ministries, a homeless shelter and soup kitchen in Forsyth County.

“It’s not just about drinking what’s in the wine bottle,” West says. “You have to have other things bringing people to you and keep them coming back.”

WINSTON-SALEM — McGriff Insurance Services, a subsidiary of BB&T, completed its acquisition of Regions Insurance Group of Memphis, Tenn., from Regions Financial. Terms of the deal were not disclosed.

GREENSBORO — FirstPoint Collection Resources, a division of debt collector FirstPoint, has acquired Credit Bureau Systems of Tuscaloosa, Ala. Terms were not disclosed.

The Nash-Edgecombe economy heats up