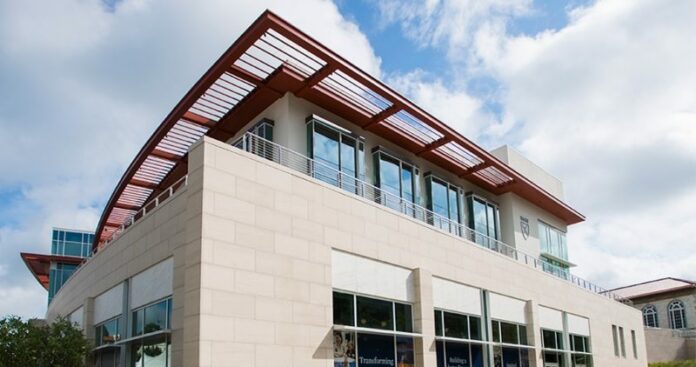 Among the latest niches of Durham architects Turan Duda and Jeffrey Paine are high-traffic university student union buildings that connect town and gown.

The 118,000-square-foot student center that opened at Atlanta’s Emory University in September 2019 won a trade association national award for Duda Paine Architects. It’s the latest honor for the Durham-based firm formed in 1997. Its current projects include a student center being built at N.C. Central University in Durham and the new N.C. School of Science and Mathematics campus in Morganton. Founders Turan Duda and Jeffrey Paine discussed the history of their 60-employee firm in an interview edited for clarity and brevity.

► What are the key distinctions of the Emory University project?

Duda: The Emory Student Center has done exactly what we hoped: taken what was there — basically a hermetically sealed box — and broken it open to establish a new campus heart and primary crossroads for campus life. Students have told me, “I’m so thrilled with this building, because I can see — and feel engaged with — the entire campus.”

Paine: I’m most satisfied with our original placement of the building, its scale, our breaking the massive program of the center into smaller pavilions so we could tuck into a hillside. The completed buildings fit into the campus extremely well, which is a true success for me.

► Is there a keeping up with the Joneses situation in student centers?

Paine: The competition from one school to the next will only be more intense. Having great facilities is part of that dynamic. Student unions have become an important tool for a university to show off their culture by having a place where students can gather and study. We believe student centers don’t necessarily need to be enormous, expensive buildings. For example, at N.C. Central [University], the program is modest, and they’ve been very thoughtful about what to include. About 50% of the space is for gathering and large meetings. These spaces are designed to be divided into multiple spaces for smaller meetings. The result will be a very impressive building but also appropriate for the budget.

Duda: More universities are realizing a student center is a recruiting tool. When parents and their kids tour a prospective school, the student center is the launching point. It’s the place students can imagine themselves being — it’s not going to be their dorm room or a classroom.

At N.C. State [University], the [Duda Paine-designed] Talley Student Union has become a symbol of the university’s community outreach. N.C. Central noted that they’d picked the site because they didn’t want to be embedded in the middle of campus. They wanted to be on the edge, between the community that supports the university and life on campus.

► How is COVID-19 affecting your work?

Duda: There is hesitancy and anxiety not knowing where the virus will go, which is why having a pause button to push before going full speed ahead is helpful. Jeff and I have been through economic cycles before — not a pandemic, of course — but we try diversifying our portfolio so if one sector is suffering, another may not be. That way, we can be ready when the project comes back. Right now, everyone is retrenching and waiting to see how things unfold.

► What is your view on the pandemic’s impact on commercial construction in your principal markets in 2020-21?

Paine: This is an unprecedented event with no contemporary reference point. Neither 2008 nor the Great Depression are applicable. What’s different today is that the underlying business denominators are healthy. We have a strong economy in the U.S. and, to a certain degree, globally. Clearly, a piece of metal has been stuck in the gears and stopped everything in its track. But there’s no reason to believe that the basic parameters of a good economic climate are somehow at risk.

In Raleigh, there’s probably close to a dozen speculative commercial office buildings ready to go from one phase to the next. It will be interesting to see who is ready to say, “If the economy is healthy, not only are we going to prepare to build, we’re going to start addressing the concerns tenants might have in their space post-COVID and accommodate them.” I would like to believe that once treatments and a vaccine are found, we will be at least as healthy, maybe even more healthy, afterward.

Duda: I believe there will be pent-up demand: demand from people who want to get out of their homes and who want to go back to the office. I don’t think the office environment is going away. I read an interesting article by someone who predicts that we’re actually going to need more office space, not less. Because if your business model is dependent on people being able to be at the office, you’re not going to be able to populate the space the way you used to; you might only be able to occupy half of it, which means you need twice as much space.

► What is your goal in terms of company size?

Paine: We’ve never been a company that expanded and contracted with its workload. Instead, we’ve always hired people who are right for the firm and our culture. We’ve stuck to that approach over the years to ensure we’re building a group who will work together as a team, support one another, generate great ideas, and complete the work well. We’re also at an ideal size to design buildings within our region as well as much farther afield.

Duda: We never had a goal of being a certain size. What’s interesting about our current size is we’re able to do the same work as a megafirm with a thousand people, while also doing the scale of project a five-person firm does. Again, it’s diversity not just [in] the type of work, but diversity in the scale and geography that has helped us immensely. Too many of the local firms we used to compete with are now under the umbrella of a larger, multioffice firm because they couldn’t do the larger projects. We’ve been able to do both. It’s an advantage.

► What project are you most proud of?

Duda: I’m really, really proud of our firm’s very first project, Gateway Village Technology Center in Charlotte, which was also our first project in North Carolina and our first of that scale. I feel we broke new ground with a response to urban design that I hadn’t seen in the state before. It may not be a skyscraper signature building, but it’s a signature space with a signature environment that engages the neighborhood on the cusp of becoming something more than it had been.

If you look at our work, you recognize our belief that every building has the potential to be a private/public entity. The Dillon [in Raleigh] is the latest iteration of that idea: It bridges the private and public divide by creating a public terrace on top of its parking structure. At Gateway, we took the space between the buildings to create that public domain, which sits in a highly secured, very private work environment. That’s quite an accomplishment.

Paine: The Duke Student Wellness Center has been very meaningful to me for a couple of reasons. One, I believe it’s truly an iconic building. Second, the building program addresses student wellness. When you consider that 60% of college and university students today will suffer from stress or depression, a facility like this helps to turn that tide. At Duke, we had the opportunity both to serve students in terms of their immediate need to go to a doctor or therapist. But the building is about the students learning a new way of living. It’s about helping them answer questions like: Where do we want to work; how do we want to live; and are we going to learn how to think of ourselves in a healthy way to be our best selves physically, emotionally, mentally, spiritually? ■