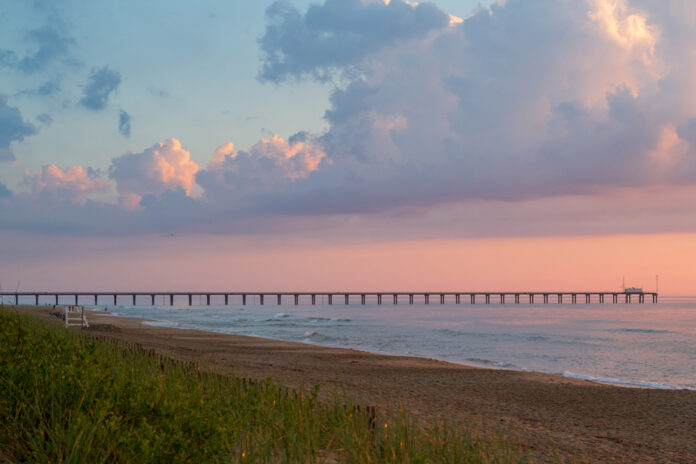 I was on the northern Outer Banks last week, at the Army’s Field Research Facility in Duck, NC. This is the U.S. Army Corps of Engineers’ coastal engineering research site. They were dedicating a new $4.3 million building next to the one that has been there for more than 40 years.

The Duck site is well-known among coastal researchers. More than 1,000 peer-reviewed articles have been published citing the facility and its data because it has monitored the waves, current, sand and ocean bottom at the site since the late ‘70s. “This is the most measured place on the planet Earth,” says David Pittman, director of the Army’s Engineer Research and Development Center, who came up with folks from the ERDC’s headquarters in Vicksburg, Mississippi, for the occasion. Duck is part of the ERDC’s Coastal & Hydraulics Laboratory.

The Duck facility exists because the Corps of Engineers has a big role in ensuring the safety and resilience of the large coastal population in our country. But Duck’s military role is what folks were mostly talking about last week.

There is much talk these days about who will dominate the littoral, the world’s shoreline regions where military landings may be required. These discussions have intensified with the emergence of China as our potential adversary in the Pacific. The South China Sea is an increasingly dangerous place through which much of the world’s trade flows. China’s timetable on Taiwan is a big intelligence question. A lot of our military planners are studying coastal maps and satellite images from the region.

Ty Wamsley, director of the coastal & hydraulics lab, reminded folks what the investment in Duck was about, really.  “Our overall goal is to ensure the area along the shore, where the littoral region is, remains a region of overmatch for the Army.”

Historically, the U.S. has had the upper hand in the littoral, “and in our recent conflicts, this domain has been largely uncontested.” But that’s changing. Most operations in that space will likely be in what he termed “contested environments. And so, we must be prepared to protect our forces.”

The Army has to be ready to move troops and equipment through surf zones and across beaches, wherever.  “And what that means is that the Army needs to own the littoral from the 10-meter depth and shallower,” he says.

And the nation whose military has the best understanding of how to maneuver in this difficult, unpredictable, and constantly changing environment will have the advantage. For our military, that means getting the research and data and tools being developed at places like Duck into the hands of warfighters, constantly and quickly.

And that was what Kate Brodie, senior research oceanographer at Duck, was explaining as she led a tour through the new, 4,000-square-foot building, which is designed to meet the FRF’s expanded military research mission.

“If you are trying to move people and equipment through the surf zone, that can be a really challenging problem,” she says. “It’s a super-dynamic environment.  If you go out and you take a survey one day, and figure out what the water depths are, where all the sandbars are, what the slope is at the beach, you might come back two days later, and it may look completely different.

“It’s really hard to make a map ahead of time that will be accurate, and then be able to inform the operations.  So, we rely a lot on our soldiers, when they’re coming through this region on the vessel, to make real-time decisions about where to go, how fast to go, when to come in.

“And what that means is the natural environment hazards are really taking a lot of attention away from the other tasks at hand.”

So the goal is to take the latest data from a variety of sources and pump it into tools that a military planner can use by drawing a box, say, around a stretch of coast, and software “goes out and harvests all the relevant satellite data, finds all the relevant wave data for that region, and provides them that information.”

“So we’ve automated that subject matter expert analysis of the littoral region,” she says.

One way to think about the facility’s work was shared by a Greensboro native who is now one of the Army Ph.D.s working in Vicksburg. Mihan H. McKenna Taylor, senior research scientist for near surface phenomenology.  We were standing in a room that will soon be upfitted as a very secure space where classified computational work will be performed, with computers networked to the high-powered systems hosted in Vicksburg.

The challenge is how to, basically, enable our amphibious vehicles to handle waves as well as surfers. “A surfer knows to go out in the surf and how to take that wave in without sliding their face on the ground.  But our boats can’t do that and our autonomous systems can’t do that.”

One reason Duck can work on this problem is that it has a lot of sensors under water, sending data constantly. It has technology monitoring minute changes in the beach. It has equipment measuring every wave. The facility, which has a staff of about 30, has been known locally as the “Duck Pier” because of its 1,840-foot-long pier, one of the longest on the East Coast. “It was originally built as a platform to make measurements directly off of,” says Patrick Dickhudt, a research oceanographer. Now it is mainly used as a conduit for offshore sensors. “Getting cables through the surf zone is hard. This lets us bypass the surf zone.”

The pier and all the imaging and sensing capabilities on the beach and underwater are suited to solving some of the military’s hardest amphibious challenges – right now. The Marines had problems last summer with new amphibious combat vehicles being disabled and overturning in rough surf during training exercises in California. With tracking devices around the pier and on the dune, Duck scientists could develop a 3-D reconstruction of an ACV coming through the surf, and pinpoint what’s happening moment by moment in a complex, data-rich interaction of humans, machines and nature. All over the military, scientists and engineers are trying to make big vehicles less turnover-prone, but they’re usually not dealing with big waves, tricky currents and shifting surfaces, all at the same time.

The town of Duck, at the northern end of Dare County, has become a popular second-home/vacation rental/retirement community, with nearly 3,000 homes in 2.3 square miles along Highway 12 between the Currituck Sound and the Atlantic. But there were no paved roads until the early 1980s, according to a town history, and it wasn’t incorporated as a town until 2002.

What is now the research facility’s 176 acres was used for nearly a quarter-century for Navy bombing practice, as the Norfolk-Virginia Beach area grew into a massive Atlantic Fleet aviation hub.

From 1941 until 1965, the practice bombs fell. When the Navy stopped using the site, the government had to decide what to do with it. About that time, the Army Corps was looking for a coastal location to study waves and beaches. Initially, the choice was  Assateague Island in Virginia, but local opposition shifted the plan to the now-surplus Outer Banks land in Duck.

“This place was a wasteland in the ‘70s,” says Curtis Mason, the founding director, who attended the dedication.

The U.S. military, then as now, had a lot of questions about surf zones and beaches.  “How does sand move?  What happens to the waves when they come to the shore? If you have a vehicle or a boat, or an amphibious vehicle like the two over there,” says Mason, “you’ve got to know what the bottom contours are if you’re going to make a landing. “

“That was the problem with D-Day,” he says. “They didn’t have good maps of the bottoms.”  One of the first things they did at the new Duck facility was get a 35-foot-tall, three-wheeled contraption helicoptered in, the Coastal Research Amphibious Buggy. The CRAB, which is still in use, is driven from a platform at the top. “That could go out to 30 feet of water on wheels,” says Mason. “We could map the bottom very accurately and very safely.”

Recently, with the dedication coming up, Mason emailed a photo to Pittman, the ERDC director, from the early days, showing some of the staff, including Bill Birkemeier, who was in attendance last week.

“Here he is,” says Pittman, holding up the photo.  “So, here’s Curt right here.  You had darker hair back then. They still have this boat, by the way. And Mr. Bill Birkemeier, sitting right there. He’s the tall guy here on top of the boat.  These guys did it.  They started it. Look what you wrought here, with your work.”