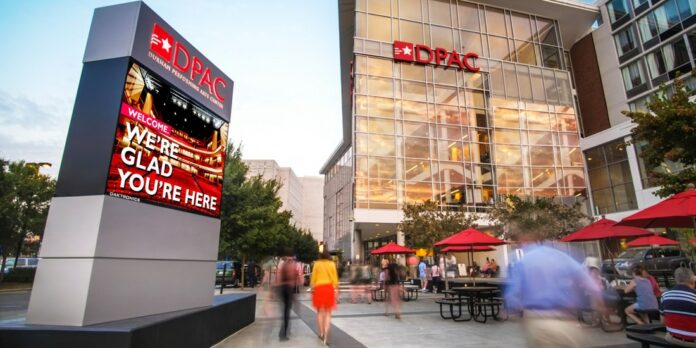 Luann and Bill Hartman of Virginia Beach, Va., are Broadway aficionados, taking in eight or nine of the latest touring plays and musicals each year. Though the 2,500-seat Chrysler Hall in Norfolk is only 30 minutes away, the couple prefers to drive three and a half hours to downtown Durham, to a sparkling, $49 million theater that has helped rebirth the Bull City into a hip, cultural hub.

The Hartmans, both 51 and retired, had never been to Durham until five years ago, when they bought tickets to see Jersey Boys (Luann’s “absolute fave” musical) at the Durham Performing Arts Center, affectionately called DPAC. The three-story, 2,712-seat venue, a glass-clad monolithic structure unveiled in November 2008 amid the Great Recession, anchors a corner of a block on the southern edge of downtown just off N.C. 147. It shares a block with the Durham Bulls Athletic Park and is across Blackwell Street from the iconic American Tobacco Campus, formerly industrialist James B. Duke’s giant cigarette-manufacturing company, which has been restored into 1 million square feet of offices, shops, apartments and restaurants.

By the time the Hartmans discovered Durham, the downtown bore little resemblance to a few years earlier, when it had much vacant real estate. “We fell in love with DPAC and Durham, too,” Luann says. “The restaurants there are amazing, the parking’s easy, and the people at DPAC are over-the-top friendly and make each experience memorable. Each year, we look at the lineup for Chrysler Hall and we say, ‘Oh, we saw those [shows] at DPAC two years ago.’”

In its 10 seasons, DPAC has exceeded expectations, drawing nearly 5 million visitors. In each of the last eight years, it has ranked among the top five best-attended U.S. theaters, alongside New York’s Radio City Music Hall, Las Vegas’ Colosseum at Caesars Palace and Atlanta’s Fox Theatre, according to Billboard magazine and other publications that track attendance. Initially, General Manager Bob Klaus and others figured they’d need to sell 8,000 to 10,000 season tickets for DPAC’s Broadway series to be self-sustainable. This year, they sold 18,000.

When it opened, officials expected the facility to draw 80 events a year. It now averages 200 to 250, luring favorites such as The Lion King, Wicked, The King and I and every Tony Award winner for Best Musical since it opened, Klaus says. The upcoming season’s headliner is the 11-Tony Award winner Hamilton, in town for a month long run starting in early November. DPAC and Charlotte’s Blumenthal Performing Arts Center are the sole North Carolina stops for the show.

Last season, the theater netted $5.2 million, with $1.6 million going to the city, which owns the facility. The city uses its annual take to pay off DPAC debt, make repairs and cushion any budget shortfalls. Last year, Durham spent $1.8 million to replace the distinctive red carpet and seats.

The facility is run by Durham Performing Arts LLC, an unusual partnership between Professional Facilities Management of Providence, R.I., and Nederlander of New York. PFM, a top theater-management company, looks after daily operations. Nederlander, which owns nine Broadway theaters, books the shows. The partnership takes 60% of profits, while the city keeps the other 40%. “Many theaters are run by cities or nonprofits,” Klaus says. “This arrangement is one reason for DPAC’s success.”

A downtown renaissance was hardly visible when Bell was first elected mayor in 2001. Downtown then had a reputation for crime, shuttered storefronts and empty streets after dark. The few bright spots were at Brightleaf Square, tobacco warehouses converted into shops and restaurants in the 1980s; the 92-year-old Carolina Theatre, restored in 1994; and the Durham Bulls minor-league ballpark built in 1995. Efforts by Capitol Broadcasting CEO and Bulls owner Jim Goodmon to restore Buck Duke’s cigarette factory were just getting underway, with the first phase re-opening in 2004.

Bell and other advocates, including former Downtown Durham Inc. CEO Bill Kalkhof, hoped a first-rate theater would spark something bigger. Bell, who left office in December, was determined it would be built without taxpayer money.

The project found quick skeptics, many questioning why out-of-towners would buy expensive tickets (they average $65) to come downtown, and why the city was creating competition for the nearby Carolina Theatre, with a 1,048-seat auditorium in use since 1926. The city-owned property, a former garage that maintained Durham’s bus system, also lacked appeal.

“It was a contaminated site,” says Chapel Hill architect Phil Szostak, who designed and co-developed the project along with Dallas-based Garfield Traub Development LLC. “We had to pump out 9 feet of automatic transmission fluid floating on the water underneath.” Abandoned car lots wrapped in chain-link fences surrounded the 1-acre site. Across Mangum Street, 100 yards away, stood the county jail, opened in 1996.

“Fortunately we didn’t need to ask the public to vote on DPAC in a referendum,” Bell says. “It probably would have lost.”

Instead, to pay for the building, the city borrowed $33.7 million in privately invested bonds, persuaded the legislature to approve a hotel occupancy tax and sold naming rights: Capitol Broadcasting bought rights to a plaza connecting DPAC to the ballpark, and SunTrust Bank sponsors the Broadway series. DPAC also charges fees on parking and ticket sales (Durham now gets $1.30 a ticket). Duke University, which invested in the American Tobacco project and occupies many of its offices, donated nearly $10 million. It reserves the theater for the American Dance Festival, a six-week event hosted by the university each summer.

“Because of our size, we can host the biggest shows that come from Broadway and the biggest concerts that play [at] theaters,” says Klaus, who oversees a full-time staff of 22. “In the early days, there was quite a bit of the unknown: Would people in Raleigh and Cary, Chapel Hill, even Greensboro, get in their cars and drive all that way to downtown Durham?”

They have: Only one in five ticket-buyers lives in Durham. Half of the 500,000 annual out-of-towners come from Wake County; 15% from Orange County; most of the rest travel from the Triad and as far east as Wilmington, Klaus says.

Their spending had a $103 million impact on the local economy last year, says Shelly Green, president and CEO of the Durham Convention & Visitors Bureau. “They might buy dinner in one of our restaurants and stay in our hotels, they might do some shopping — and they might stop and get gas.”

As hoped, DPAC’s success has helped trigger a robust downtown revival. Before the center’s opening, downtown Durham had one hotel. Now there are six, including two bank buildings transformed into boutique hotels and a snazzy Aloft that shares a wall with DPAC. Pre-DPAC, there were a couple-dozen restaurants downtown. Now there are 60 to 70. Aspen, Colo.-based Austin Laurence Partners is building an $88 million, 27-story tower “with million-dollar condos that are sold out,” Green says.

“DPAC doesn’t get all the credit, but any reasonable person can come to the assumption that it deserves a significant share,” she says. “You don’t find many boards on storefronts downtown these days. You see lots of cranes in the sky building new things.

“As we like to say: The revival has been a 30-year overnight success.”