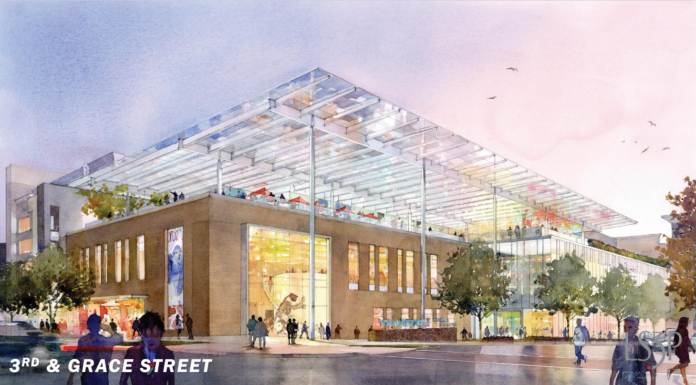 Wilmington’s Zimmer Development, owned by one of the city’s most prominent families, is partnering with the New Hanover County to redevelop a prominent downtown block in the Port City for a major mixed-used development. Many Wilmington leaders support the effort.

But the plan received lots of skepticism Aug. 2 at the Local Government Commission, as State Treasurer Dale Folwell and some members raised questions. The LGC has financial oversight because of the county’s involvement.

Project Grace would include an $80 million public library and Cape Fear Museum to replace existing sites, with the city paying Zimmer a lease of $4 million annually for 20 years. Zimmer’s plans also include 100 apartment units, a 150-room hotel and 10,000 square feet of retail space. The county would continue to own an improved 620-space parking deck.

The block is between Grace and Chestnut streets, two blocks from the Cape Fear River. It includes a former Belk department store building. “It’s one of the first things you see when you drive downtown,” said Lisa Wurzbacher, an assistant county manager. County Commissioner Deb Hays called the project “a game-changer.”

Yet Zimmer was the only group to offer a proposal, which Folwell and commissioners termed surprising given strong demand for Wilmington real estate. Wurzbacher called it a complex project that has been in the works since 2018. The land is expected to sell for $2.5 million, she said.

Zimmer expects to invest about $30 million, but that could go much higher, said Adam Tucker, the company’s director of development. Folwell noted that Tucker’s construction cost estimates for apartments of $150 per square foot was 75% or more lower than the market rate.

“Whether it costs $30 million or $50 million, you don’t have any risk in that,” Tucker responded.

By having a public-private partnership, the county will benefit over 20 years with an estimated $11.6 million in property tax revenue, $6.5 million in room occupancy taxes and $2.2 million in sales tax coming from the private portions, Wurzbacher said. As for the library, the lease roughly matches the debt cost of a traditional public project that wouldn’t include a hotel and apartments, she said.

Folwell criticized the county’s agreement to pay Zimmer $2.5 million in planning and architectural costs if the project falls through. That puts unnecessary pressure on officials to approve the plan, he said. Zimmer needs to be compensated for taking risk, Tucker said.

Zimmer has developed $3 billion in real estate projects in more than 140 cities. Though Tucker asked for the commission’s approval at the meeting, action was delayed until a future gathering.

(This story originally appeared in The North Carolina Tribune, an affiliated publication.)