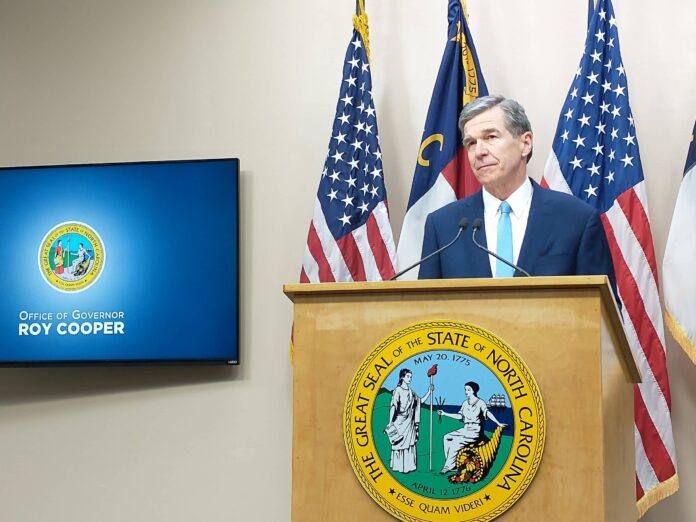 Late last month, Gov. Roy Cooper gave Republican legislators a choice: Agree to Medicaid expansion and Democrats would support major tax cuts; or they could decline to expand Medicaid and pass a budget without any income tax rate cuts.

Lawmakers never gave a formal written response to Cooper’s Oct. 27 offer. Instead, they pressed ahead with a budget that incorporated many of the governor’s other requests – including more education spending and higher state employee raises – but that kept tax cuts without Medicaid expansion.

Cooper announced this week that he’ll sign the spending plan anyway, saying that “the good outweighs the bad.”

The two sides negotiated for weeks starting in late September, hoping to reach a bipartisan compromise. Both Cooper and legislators declined to provide details of their offers and counter-offers until now. Documents detailing the budget offers were released to Business North Carolina on Wednesday following a public records request to the office of Senate leader Phil Berger.

The process began when House and Senate leaders reached an initial agreement that reconciled the differences between their original budgets. That spending plan included corporate and personal income tax cuts that were largely identical to the gradual rate decreases that appeared in the final budget.

Under that plan, most state employees would have received a 4% raise over two years, instead of the 5% in the final budget, with teachers seeing a similar increase of 2% per year.

Cooper responded to the proposal on Oct. 4, requesting that legislators add Medicaid expansion and hundreds of millions of dollars in additional education funding to fulfill a judge’s order in the Leandro lawsuit.

He also offered an alternative tax cut proposal that would have dropped rates more gradually, bringing the personal income tax to 4.75% by 2031 and the corporate income tax to 1.25% by 2032.

And he sought 8% raises for teachers over two years – double Republicans’ initial plan – plus eight weeks of parental leave for teachers and the restoration of extra pay for educators with master’s degrees.

Cooper also wanted lawmakers to drop “all controversial policy provisions,” including changes that would weaken his emergency powers and limit the attorney general’s ability to approve legal settlements.

Two weeks later, on Oct. 19, legislators sent Cooper a counter-offer of just three pages. They were willing to increase state employee salaries by 5% over two years, increase K-12 education spending by $100 million a year over their original plan, and remove 22 of the “controversial” policies the governor had objected to.

The “No Patient Left Alone,” tree regulations and teacher requirements were not included in the budget passed this week.

The Oct. 19 document appears to have been Republicans’ final written offer. Cooper responded on Oct. 27 with his two-option counter-offer.

If Republicans would agree to expanding Medicaid, he’d agree to tax cuts with a few other conditions: He also wanted 6% pay raises for teachers, an additional $500 million in school construction funding and $75 million for digital literacy efforts.

Cooper’s “Option 2” called for Democrats to support a budget without Medicaid expansion, if tax cuts were limited to an increase in the standard deduction, and if teachers got 8% raises and the Leandro order was fully funded. That option also called for Republicans to drop the controversial policy provisions.

“Both contain compromises we all like and dislike, however we know compromise is needed to agree on a budget,” he wrote in the offer. “I believe that Senate Republican leaders, House and Senate Democratic leaders and I could reach an agreement based on tax cuts and Medicaid expansion, but the speaker has told us his Republican caucus is not ready to do that based on opposition to Medicaid expansion.”

Legislators did not provide a written counter-offer to the Oct. 27 proposal from Cooper. As word got out that the legislature planned to move forward with a budget without the governor’s agreement, Cooper sent a final two-page offer on Nov. 9.

In that document, the governor called for the legislature to hold a floor vote on Medicaid expansion before it adjourns in 2022. Under that scenario, legislators would include a policy provision in the budget that would allow Cooper’s administration to expand Medicaid on its own if the promised vote didn’t take place.

That proposal also didn’t get a written response. Less than a week later, the final budget bill was released. The only mention of Medicaid expansion was a provision to create a study committee on the issue next year.