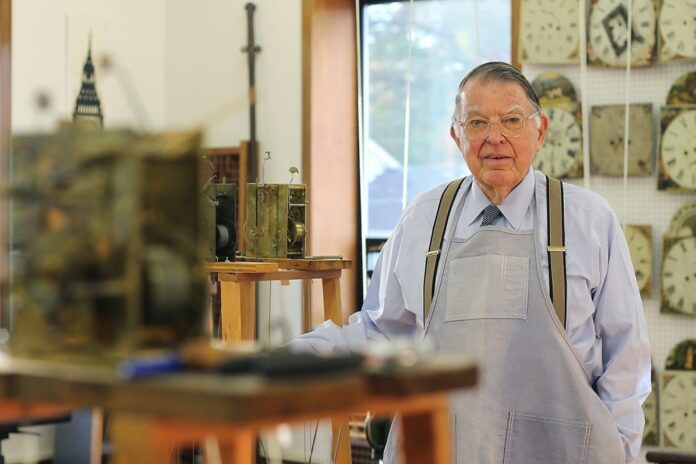 Dick Spangler, a Harvard man with a passion for business, clocks and public education My main memories of Dick Spangler Jr. involve ‘cue. Back in the day, my journalist friends would grab a $5 lunch at Charlotte’s Rogers Barbecue or Art’s Barbecue and often, a bespectacled, uber-serious-looking businessman would be sitting alone, reading a newspaper while chowing down on North Carolina’s most famous food.

“Did you know that guy is probably the richest fellow in North Carolina,” I’d tell my friends, some of whom weren’t familiar with the man who was among the most influential North Carolina business leaders over the last 40 years.

A taste for barbecue may have been the only simple thing about Mr. Spangler. The son of a Charlotte contractor and real-estate investor, he attended Woodberry Forest School, an elite boarding school in Virginia. His hall mates there wound up being two of his best lifelong friends: Veteran Charlotte lawyer Russell Robinson II and Frank Daniels Jr., the longtime publisher of The Raleigh News & Observer. (Daniels, whose family owned the N&O for generations, is among the owners of Business North Carolina.)

Spangler then attended UNC Chapel Hill and Harvard Business School, graduating in 1956. He joined the family business, expanded its real estate holdings and invested in the Jacksonville, N.C.-based Bank of North Carolina. The bank was struggling in the 1981-82 recession and Charlotte-based NCNB Corp., which had lent money to Spangler, considered calling for repayment of the loans, according to a 2016 book by Luther Hodges Jr., then a senior NCNB executive. Hodges pushed back against the request and NCNB eventually acquired the Bank of North Carolina for stock in 1982. The deal turned Spangler into the Charlotte-based company’s largest shareholder.

For the next 25 years, Spangler rode the wave of growth and stock-market gains as Hugh McColl Jr. and Ken Lewis built what became today’s Bank of America Corp. While Spangler kept a low profile, his wife, Meredith, was a longtime bank director. The Spanglers have never said if they sold much stock during BofA’s near-collapse in 2007-09, though it’s widely believed that they held on and have benefited as shares rebounded from less than $3 to about $31.

Banking was only part of Spangler’s empire. Long before private equity became dominant, he was part of an investor group that considered a bid for Winston-Salem-based RJR Nabisco Inc., once the state’s most valuable company. The tobacco giant was eventually acquired in 1998 by New York buyout firm KKR & Co. in a deal memorialized in the best-seller, “Barbarians at the Gate.”

In 1995, Spangler bought Charlotte-based National Gypsum Co. for $1.2 billion after a takeover battle. The privately held company doesn’t disclose its finances, but its website says it’s the second-largest U.S. wallboard manufacturer with at least 17 plants. (The largest producer, USG Corp., has a stock-market value of more than $6 billion.) Spangler’s son-in-law, Tom Nelson, has been CEO since 1999.

His dealmaking during a time when his day job was perhaps the most important post in the state: He was president of the University of North Carolina System from 1986-97. He pressed system officials to limit tuition increases, reflecting the state’s constitutional mandate to provide the most affordable education possible. He didn’t take a nickel for his work. The low-tuition strategy prompted campuses to rely more on state funding than parents and students. Two decades later, UNC still ranks among the lowest-cost public university systems in the U.S.

Before he ran UNC, Spangler gave tens of millions of dollars to Harvard, where the 122,000-square foot Spangler Center student union for MBAs opened in 2001. He later chaired the business school’s visiting committee and helped the school raise more than $500 million in its first capital campaign during 2000-05.

Back in Charlotte, Spangler’s influence was evident in surprising ways. Serving on the city school board when white flight and fights over desegregation mounted, he helped engineer the surprise firing in 1976 of a superintendent who had lost his confidence. His support for public education continues in multimillion dollar initiatives at several west Charlotte schools that were a national model for successful racial integration in the 1970s and ‘80s, but have since resegregated and reported poor test scores and graduation rates for many years. His daughter, Anna Spangler Nelson, serves on the UNC System board.

Church was also important to Spangler, a key lay member at Myers Park Baptist Church in Charlotte, long known for its progressive, outspoken pastors and community leadership. With his blessing, the church welcomed lesbian and gay members long before most peers, according to a church history. As in business, Spangler moved decisively at his church: In 2000, the church irked some neighbors by tearing down an adjacent historic home — owned by the church — to make way for a recreation center. With the project named after his business colleague Dick Cornwell, everyone knew Spangler’s fingers were all over the demolition. Meanwhile, Spangler’s giving to political causes, which had been bipartisan historically, shifted. In the last decade, his construction company gave money almost exclusively to Republicans, according to Opensecrets.org.

As evidenced by his passion for fixing clocks and astronomy, his disinterest in golf and a general aversion to being in the headlines, Spangler was intensely private. Now, I wish I’d bothered him at one of those barbecue joints, hoping to gain insight on his remarkable view of the world.