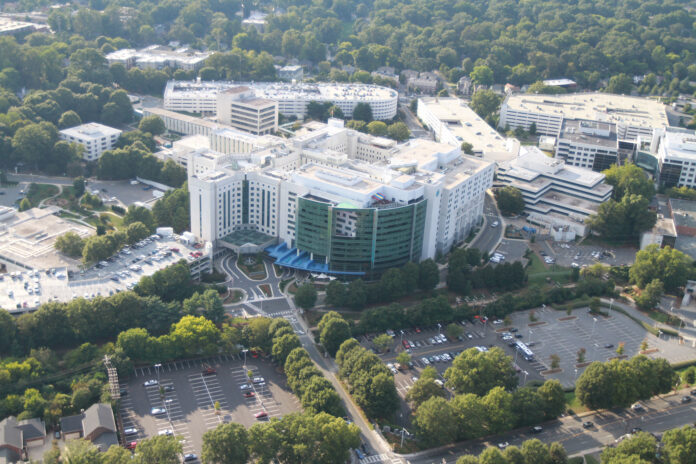 Charlotte-based Atrium Health said it wants to double in size through a partnership with Advocate Aurora Health, a larger system with 27 hospitals in Wisconsin and Illinois.

No money is changing hands and the two not-for-profit systems will retain their brands in local markets and remain responsible for their debt, according to a press release. The combined system, to be called Advocate Health, would be based in Charlotte and have annual revenue topping $27 billion. Federal regulatory approval is required.

The transaction marks one of the biggest M&A deals in Charlotte since the bank merger consolidation days of the 1990s and 2000s, when Bank of America and Wachovia built up two of the largest U.S. banks. (Wells Fargo later acquired Wachovia amid the 2007-09 recession.) The combined hospital systems would  rank fifth among U.S. hospital systems, bolstering Atrium’s efforts to make the Queen City a national leader in health care innovation.

Atrium CEO Gene Woods has emphasized the importance of becoming one of the largest U.S. health care systems since coming to Charlotte in 2016. He oversaw acquisitions in Macon and Rome, Georgia and formed a partnership with Winston-Salem Wake Forest Baptist Health.

But Woods was stymied in his efforts to merge with Chapel Hill-based UNC Health and acquire Wilmington-based New Hanover Regional Medical Center, which agreed to sell to Novant Health of Winston-Salem.

Woods is slated to become co-CEO for 18 months with Advocate CEO Jim Skogsbergh, who will then retire.

Advocate Aurora had annual revenue of $14 billion and net income of $1.3 billion last year, making it larger than Atrium. The combined companies will operate 67 hospitals and more than 1,000 care sites, while employing 148,000 employees.

“This strategic combination will enable us to deepen our commitments to health equity, create more jobs and opportunities for our teammates and communities, launch new, game-changing innovations and so much more,” Woods said in the news release.

Much research questions the benefits to patients and communities from hospital industry consolidation. Woods told the Charlotte Observer that Atrium and Advocate Aurora have shown they can drive savings to make their systems more efficient. He also said he favors better partnership with insurance companies to improve service for patients.

“Research consistently shows mergers and acquisitions do not deliver on hospital executives’ promises, but instead trigger higher costs, reduced access and the same or lower level of care,” Folwell said in a press release. “Consumers of health care, and the taxpayers who pick up the tab for tax-exempt, multibillion-dollar investment companies disguised as nonprofit hospitals, which are run by multimillionaire executives, ultimately will pay the cost of this ill-advised merger.”

Many hospitals face financial pressure because of soaring labor costs and the loss of federal stimulus money that was tied to the COVID-19 pandemic, says Scott Becker, founder and publisher of Becker’s Hospital Review, a leading industry publication. Getting bigger may help Atrium become more attractive to potential workers and gain more clout in negotiating with medical payers, he says.

“Both Woods and Skogsbergh are highly regarded, very smart and very empathy-driven executives,” Becker says. “A combination of two larger organizations that don’t overlap too much in peer communities is more likely to get approved by the government in the antitrust process.”

The announcement included a $2 billion pledge to “disrupt the root causes of health inequities across both rural and urban underserved communities” and a plan to add more than 20,000 new jobs in the systems’ footprint.

The new board will include an equal number of Advocate and Atrium members. Atrium Health Chair Ed Brown, a key M&A executive at Bank of America for many years, will chair the board through Dec. 31, 2023. He will then be succeeded by Advocate Aurora Chair Michelle Richardson, who is a higher education consultant in Chicago.

Neither Atrium or Advocate Aurora have agreed to assume any liability for the other organization’s debt as part of the transaction. Refinancings would depend on “market conditions, management considerations and other factors.”

The two systems say that they provide nearly $5 billion in annual community benefits, including providing care for those who can’t afford to pay their bills. 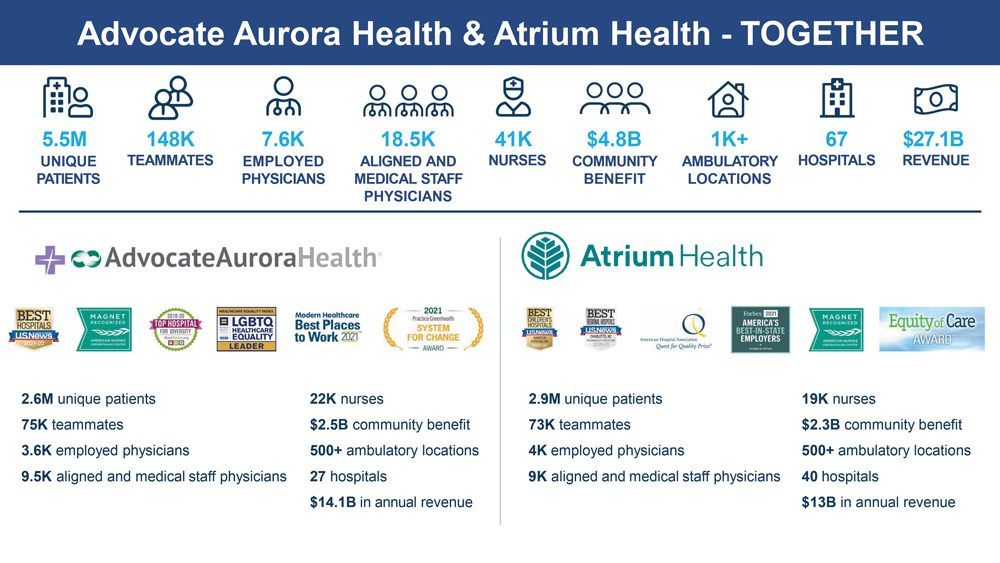