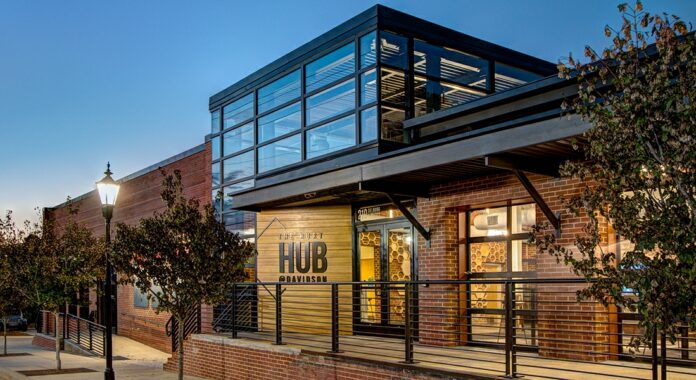 Davidson, known for its namesake liberal arts institution, Davidson College, is one of the state’s wealthiest and best-educated towns, boosted by the picturesque landscapes and pricey real estate adjacent to neighboring Lake Norman. It’s become a hot spot for retirees and celebrities including Michael Jordan and NASCAR drivers.

Supported by its population of high-wealth individuals and a university-run entrepreneurship program, the lakeside town is also finding its place in the innovation economy. Davidson College is introducing more support for technology projects and startups created by both students and community members.

The college, which doesn’t have a traditional business school or graduate programs, conceived an entrepreneurship incubator in 2014 when the family that owned the historic Davidson Cotton Mill, located just off campus, offered to sell the industrial complex for $730,000. School officials transformed the 23,000-square-foot space into the Jay Hurt Hub for Innovation and Entrepreneurship, named after a $5 million donor, Jay Hurt, an ’88 Davidson alumnus and CEO of The Hurt Co., a Houston-based lubricant and fuel distributor acquired by RelaDyne in 2010.

The Hurt Hub, which opened in July 2018, incorporates basic concepts offered in business education and the real-world experience of starting a venture, facing failure, scaling a business model to success and potentially raising investments along the way. Though it isn’t formally tied to Davidson College’s curriculum, the Hurt Hub provides students resources to apply their skills and academic knowledge to tangible solutions.

“The Hurt Hub isn’t Davidson’s business school, but we’re trying to connect the liberal arts into what’s happening in the marketplace of technology and entrepreneurship,” says Hurt Hub General Manager Julie Goff, a 2005 Davidson grad who previously worked in consumer education at Bank of America before taking a job at her alma mater.

“A liberal arts education can be the best separation for a career in entrepreneurship or business,” Goff adds. “It’s about critical thinking, creativity and connecting the dots, all things that are important for starting or leading a company.”

Supported by sponsors including Barings, Lowe’s, Ingersoll Rand and Tresata, the Hurt Hub provides a space where Davidson students from any major or discipline can attend workshops, use free data and analytics tutoring services, and take on paid projects via “Gig Hub,” where local businesses assign students short-term work involving market research, copywriting, data analytics, web development and other skills.

The 10,000-square-foot space opened in 2018, marking Flywheel’s first expansion outside the Triad. Flywheel founding partner Peter Marsh wants to expand Flywheel’s footprint to 10 to 15 new locations by 2025, including sites opening this year in Salisbury and Greenville, S.C.

“We’re already seeing the results in the form of startups being created, getting the right resources, and the matriculation of growth-stage companies,” Marsh says. “Student and faculty engagement is ramping up each day.”

Flywheel and Davidson College work closely with LaunchLKN, an organization that started in 2017 when Erica Madden, owner of consulting firm Bloom Strategic Communications, teamed up with Real Ventures partner Mark McDowell and Everblue Training co-founders Jon and Chris Boggiano to reach out to 50 contacts interested in serving startups in the Lake Norman area. LaunchLKN developed a group of founders, mentors and financial supporters.

Madden, LaunchLKN’s executive director, says there were “a variety of people in the area involved in venture capital or angel investing. Many of them had moved here from other places, and they were still investing in companies in those places, not around here. That’s largely because it’s hard to find out who exists and where. Things were very disjointed in the local startup world.”

LaunchLKN hosts a monthly seminar series at the Hurt Hub on emerging markets such as esports, artificial intelligence and blockchain. Last March, the group also started offering a free mentorship program at the Hurt Hub, engaging local investors, business leaders, serial entrepreneurs, and retired or semi-retired people who have business experience and want to work with early-stage entrepreneurs. The pilot cohort drew 25 companies and 50 mentors.

With the mentor program launched, LaunchLKN’s next goal is to bring more capital to Lake Norman through introducing educational programs for wealthy individuals interested in backing promising companies. “We think there’s plenty of wealth in this area, but we’re still baby-stepping our way into directing it toward local startups,” Madden says. “We want to be a resource for people who might be interested in supporting local entrepreneurs but don’t know how to get involved.”

Others also see opportunity in the Lake Norman area. In 2019, the Charlotte Angel Fund expanded to Davidson, holding monthly meetups at the Hurt Hub to engage local startups and provide a behind-the-scenes look into the investor process. Angel Fund administrator Greg Brown says he’s impressed with the entrepreneurial developments in the region.

“[Founders] range from Davidson students to corporate executives stepping out for their first startup adventure to serial entrepreneurs,” he says. “The startups themselves are pursuing things all the way from consumer products to software and hardware. In particular, the breadth of subject matter is more than what we typically see in Charlotte.”

With the resources and support offered by the Hurt Hub, LaunchLKN and Flywheel Coworking coupled with the Charlotte Angel Fund, Brown says he has “no doubt that the Davidson-based entrepreneurial community will continue to develop and thrive.”