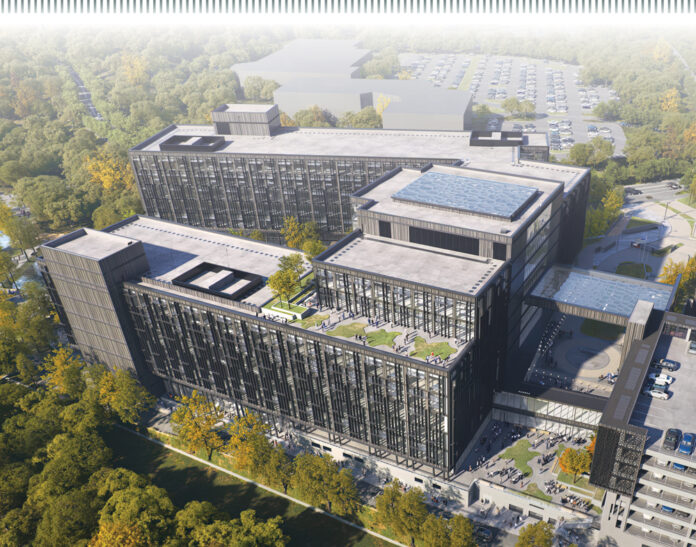 Construction scaffolding and exposed beams lent a touch of reality as Centene CEO Michael Neidorff, standing next to Gov. Roy Cooper, pointed out details on a tabletop architectural model of a huge building under construction in northeast Charlotte.

“It’s amazing,” Cooper beamed, “what a billion dollars can do.”

At the June 2021 gathering at Charlotte’s University Research Park, Neidorff told Cooper, Mayor Vi Lyles and others that 3,230 employees would soon work in the 800,000-square-foot structure for the nation’s largest Medicaid managed-care insurance company.

The $450 million in potential state and local incentive payments, arranged by Cooper and others, helped entice what promised to be one of North Carolina’s biggest economic-development home runs. Lyles hailed the project as a “milestone” for the area.

The plan called for a completed building by late 2022, when  construction would be well under way on adjacent campus projects. Centene envisioned recreational areas, a child-care site and other amenities.

It all sounded logical given Neidorff’s success in creating a Fortune 500 company with 71,000 employees. Centene’s plans seemed akin to New York financial services giant TIAA, which opened an adjacent 92-acre campus in 2000 that now employs 5,000.

But Neidorff’s promises of new jobs and investment are now a distant memory.

In August, Centene told Cooper it was quitting the unfinished project after investing $700 million. That’s more than triple the amount of money that Carolina Panthers David Tepper walked away from at his ballyhooed Rock Hill, South Carolina development after disputes with municipal leaders earlier this year.

The Centene property, which Neidorff said would become its East Coast headquarters, is listed for sale by the Cushman & Wakefield real estate firm. It’s hoped that a major enterprise will pounce on the building — probably at a big discount. “They’re watching a couple of hundred million dollars evaporate,” says a Charlotte executive who helped attract Centene.

Centene, in a statement, says the reversal reflects “a funda-mental shift in the way people want to work. About 90% of our workforce is fully remote or in a hybrid work environment, and workplace flexibility is essential to attracting and retaining top talent.” Officials declined to elaborate.

The company is “drastically” office space across the U.S., as more employees work remotely or in hybrid settings, notes Sam Chan, Cooper’s press secretary. The company employs 1,300 statewide, including 700 in Charlotte.

But there was much more to Centene’s expensive incursion into the University City area near UNC Charlotte than bungled planning and a shifting workplace culture, according to people familiar with the failed project. Several other factors behind the abrupt shift have received limited attention.

Perhaps most notable, with all due respect, is that Michael Neidorff is dead.

An infection claimed the CEO’s life in April at age 79, ending an increasingly fractious relationship with investors, Centene’s home state of Missouri, regulators, board members and others. He had gone on medical leave two months earlier.

As the Charlotte project was rising, Neidorff was facing growing dissatisfaction by institutional investors over the company’s financial performance and significant pressures from regulators over its operations.

In November 2021, he agreed with New York-based hedge fund Politan Capital Management to step down as CEO and executive chair in late 2022. The deal also included remaking Centene’s board with six directors leaving and five new ones added.

Politan owned less than 1% of Centene’s stock, or about $900 million, while Neidorff personally controlled about $500 million. But Politan founder Quentin Koffey had successfully forced management upheaval at his previous jobs. While working for the New York-based DE Shaw fund in 2018, he was credited with helping oust Robert Niblock, who had been CEO of Mooresville-based Lowe’s Cos. for 13 years.

The Altoona, Pennsylvania, native joined the health insurance company when it was based in Milwaukee, Wisconsin, in 1995. A year later, he moved the headquarters to St. Louis, where he had led a physicians-owned health plan. He took Centene public in 2001 when it had $327 million in revenue and 235,000 members.

By 2013, revenue topped $10 billion with a membership of 2.7 million. Its rapid growth continued with revenue likely to top $135 billion this year. During the decade ended December 2021, the company’s stock soared more than 750%, double the S&P 500 Index.

That history didn’t impress Politan, which criticized Centene for profit margins that lagged peers, causing its shares to stagnate between 2018-21. Also, it isn’t unusual for hedge funds to target aging CEOs with unclear succession strategies. During his final years as CEO, Neidorff received annual compensation of about $25 million. No other  company executive topped $10 million.

Most state Medicaid programs contract with private insurers to cover people who have disabilities or low incomes. The programs are jointly funded by state and federal taxpayers. In many states, the insurers procure medications for the program through a pharmacy benefit manager, which acts as an intermediary between health plans and pharmacies. Centene has both a health plan and a PBM.

In September, Texas became the 12th state to settle claims that Centene had defrauded their Medicaid programs involving excessive charges for pharmacy services. The settlements have totaled $475 million, according to Kaiser Health News.

Centene has denied any wrongdoing and continues to operate in the states where it has struck settlements. But it set aside $1.1 billion to settle the allegations, according to company filings. It’s not clear if Centene is under investigation in North Carolina.

Ohio Attorney General David Yost, in an interview, faults Centene for “corporate greed.” A Mississippi legislator accused the company of taking “$55 million of our money that was supposed to be spent on the poor, the sick, the elderly, the mentally ill and disabled.”

“The desire for flexibility in work was driving change,” says Tobe Holmes, senior director for land use and economic development of University City Partners, a nonprofit that promotes the area where Centene planned to operate. He recalls discussing the issue with Gov. Cooper before the pandemic broke out in early 2020.

“Centene has some very skilled people, and some call centers can be virtual, with people who can discuss health care, benefits. Others, like in banking, find people more efficient when they’re in the office together,” Holmes says.

To be sure, the pandemic has changed the landscape of corporate workplaces.

In Charlotte, Duke Energy says remote work is enabling it to cut office-space needs by 60%, which will save $90 million a year in real-estate leases. The company is consolidating its downtown Charlotte operations into the new 40-story Duke Energy Plaza slated to open in early 2023. The company ended its lease of 21 floors of the nearby Duke Energy Center and is selling its former 13-story headquarters building.

Other corporations have had second thoughts about remote work after measuring productivity. Last fall, Bank of America limited the time that some staffers could work from home to two days a month. CEO Brian Moynihan has emphasized the benefits of building corporate culture through office work.

Centene’s cut-and-run also came amid significant tension between Neidorff and politicians in the company’s home state. Beyond his status building one of Missouri’s most successful companies, he gained respect for promoting diversity long before it became popular in corporate America. He also made Centene a major philanthropic force in St. Louis, which has struggled to retain major corporate headquarters.

Clayton, Missouri, Mayor Michelle Harris says she grew very fond of Neidorff.  “He was a visionary leader and a person who’d take action on his visions. He didn’t just talk about it, he went out and did it.”

Neidorff also wasn’t afraid to raise concerns publicly. In press interviews and comments to civic groups, he complained about the increasing murder and crime rates in St. Louis.

“Mr. Neidorff basically put a stake in the ground and said, ‘Hell no St. Louis, we aren’t doing this anymore,” says a Charlotte official who asked not to be identified because of his role in recruiting Centene. “He was really angry at St. Louis, but he kind of kept it under cover. He had a special bee in his bonnet about getting away from there.”

Neidorff also was disappointed that Missouri didn’t increase Medicaid funding, according to several sources familiar with the matter. He met with Gov. Michael Parsons in 2021, but Press Secretary Kelli Jones declined to discuss the subject of the meeting.

Sources say Neidorff told Parsons that Missouri was an “embarrassment” for refusing to boost Medicaid funding, his company’s core business. Missouri voters had approved an increase, but Parsons refused to sign enabling legislation after the state’s Republican lawmakers declined to fund the growth. (North Carolina has not approved expanded Medicaid funding, either.)

Whether the CEO threatened to move the company headquarters to Charlotte is unclear. Clayton Mayor Harris doubts it. “He cared very much about the St. Louis community at large, and he was committed to the business community and trying to attract other companies here,” she says. “His family lives here. I couldn’t imagine him saying that.”

To succeed Neidorff a month after his medical leave began, Centene’s board picked a CEO with a very different history: Sarah London, 41, had worked for a venture-capital division of rival United Healthcare before joining Centene to lead digital strategy in 2020. The Harvard University graduate and University of Chicago MBA is an expert in data analytics and technology innovation.

“[She] was the absolute opposite of Neidorff,” says a Charlotte official who worked with the company. “This was a total change in attitude about what technology can provide for the future.” London had confidence that remote communications technology could serve customers with less need for office space.

“Mr. Neidorff was proceeding in a way the board didn’t appreciate,” the executive said. “This gave her the leverage she needed to dump the project altogether.”

Centene paid $10 million for its initial 80-acre tract in University Research Park, then added another 130 acres. It planned to pay average salaries topping more than $100,000, according to data required to secure state incentives.

Writing off hundreds of million of dollars isn’t a major hit for Centene, which has a market value of nearly $50 billion. Its stock gained about 4% this year through early December; the S&P 500 Index declined 14% in the same period.

It’s unclear if the building will end up in the hands of a single tenant or include multiple occupants, says Jade Hubbard, a spokesperson for Cushman & Wakefield. The building remains unfinished.

Holmes, the University Research Park official, says “Centene was locating in University City for a reason, and those reasons still exist.” It’s the region’s second-largest employment center with close proximity to nearby UNC Charlotte.

“That’s exactly the kind of environment that has legs,” he says. ■

2023 Legal Elite: Top N.C. lawyers as selected by their peers