Dana Weston has a big-city background, but she’s now tackling one of the tougher small-town challenges in North Carolina. Since 2015, she has led UNC Rockingham Health Care in Eden, a city of about 15,000 that is 35 miles north of Greensboro. She has guided the 108-bed hospital formerly called Morehead Memorial Hospital through a Chapter 11 bankruptcy in 2017 and its sale last year to UNC Health Care. She was named Young Healthcare Executive of the Year in 2018 by the National Association of Health Service Executives and received an Alumni Leadership Award from the UNC Gillings School of Global Public Health.

“While my passion is health care, my purpose has always been to do what I can to create a world that is good, a goodness that is not tied to a ZIP code,” she told 500 attendees at the annual Institute for Emerging Issues conference in Raleigh in February. Weston studied neuroscience and behavioral biology at Emory University, earned a master’s of health care administration at UNC Chapel Hill and had a fellowship at Duke University Hospital. She worked for Novant Health for about eight years before taking the Eden post.

She talked about her work in an interview edited for clarity and brevity.

Tell us about your background.
I’m a city girl, born and raised in St. Louis, went to college in Atlanta, and when I moved to North Carolina, I had an image of one huge tobacco field. I definitely didn’t know what rural culture was about. I moved to the Triangle, and I thought that Durham/Chapel Hill was too small. So I moved to Charlotte.

Living now in Eden has taught me so much about the beauty of rural communities, including the unmistakable pride of the people. Generations of textile mill workers and farmers are proud of owning their homes and passing them down to their children. They are not now, nor have they ever been, looking for handouts. When they are uninsured, what they are likely doing is staying at home and trying some cure that has been passed down through the ages, and by the time they end up in our emergency room, they are sicker than they would have been had they had access to primary care.

You’ve said that rural economic struggles also affect urban areas. How does that relate to Rockingham County?
When rural counties like Rockingham struggle economically, it creates pressure for state assistance. The North Carolina Rural Center released a study showing 80 (of 100) counties classified as rural had a 6% decrease in taxable wages between 2000-17 — the decline was 24% in Rockingham County. Meanwhile, the six large urban areas registered a 27% increase.

More than 18% of our residents live in poverty, and almost 13% don’t have health insurance. The state mortality rate for diabetes is 23 per 100,000. In Rockingham County it is 34, or 39% higher. Diabetes patients cost more than twice as much to treat as non-diabetic patients. This is a dramatic example of how escalating health care costs compound economic stress in a county that is experiencing a decline in revenues.

What are the implications for North Carolina if rural hospitals continue to struggle to stay open?
Access to primary care is an important issue. One study showed that there are 1,420 patients for each primary-care provider in North Carolina, while it’s 2,540 in Rockingham County. Our two hospitals have about 30,000 emergency room visits annually, or 60,000 in a county of 91,000 people. This kind of overload on ERs impedes the delivery of urgent care, and it’s just a very high-cost form of health care delivery for the hospitals.

When you have large numbers of uninsured or residents who can’t afford basic health care, then chronic diseases like diabetes begin to take a toll on individual lives but also on the financial stability of the hospital. When people are forced to delay access to care, they resort to increased use of the emergency room, one of the most expensive forms of care.

Is attracting doctors a problem?
In terms of the challenges facing small, rural hospitals, much of it is physician recruitment. Rural communities are facing a physician retirement crisis at a greater rate and impact than urban areas. For example, in Eden we have three obstetricians. Two of them are within three years of retirement.

The last time UNC Rockingham Health recruited an OB/GYN, it took about six years. One of our sister hospitals in the UNC system was trying to recruit a urologist. They just hired one after a six-to-eight year process. 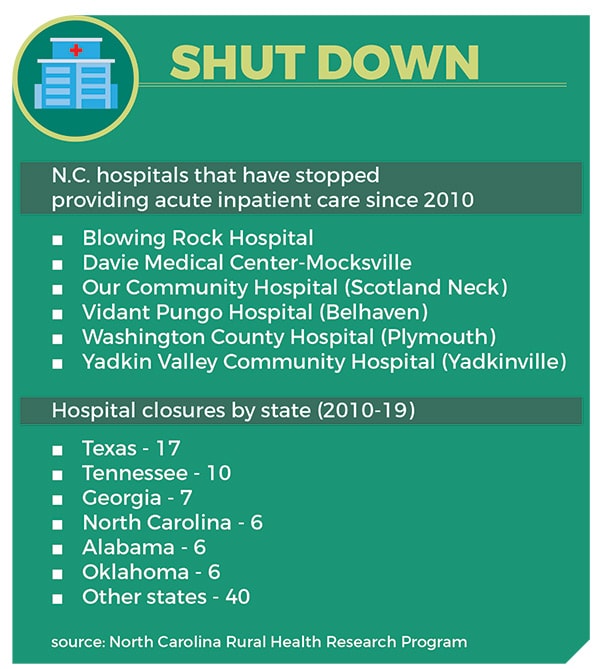 The cost of health care continues to be a hot topic. Why is it so complicated?
I know very well one piece of health care, which is the provision by hospitals. I know that every year the drug costs go up in ways I can’t explain. I don’t know why the cost of aspirin should change anymore. The same is true for other supplies. What the hardware for a knee replacement costs today and what it will cost next year can be highly variable.

The system is composed of many layers which never seem to get simplified, but like the Medicaid expansion conversation remain complex and disassociated. I think we might look to other countries and cultures for some clues. I just visited a friend in Japan. She was pregnant and I witnessed her walking into a primary care office with no appointment; she saw the doctor, and then she left. There was no request for an insurance card. It was almost like she had walked into a store where she had a tab or credit. It was so easy. She was terrified about moving back to the States and having to figure it all out.

What’s next for UNC Rockingham?
We are still in the integration phase with UNC Health Care. There are so many resources and really smart people within UNC Health Care, and we are trying to absorb all of their recommendations and determine the best ways we can implement them here to turn this hospital around.

Simply being acquired by a large health system does not mean you are safe and out of the woods. So keeping UNC Rockingham off the list of hospital closures remains my priority. If you had asked me what’s next five years ago, I wouldn’t have said CEO and I wouldn’t have said CEO of a struggling rural hospital. I feel like I was brought here for a reason, a purpose, and while we’re closer to that being achieved, we’re not there yet. The goal remains the same: to figure out what model for UNC Rockingham is sustainable.