Dale Jenkins, who for 25 years has led what was Medical Mutual Insurance of North Carolina and is now called Curi, is retiring in June. His successor will be Jason Sandner, a 10-year Curi staffer who was named chief operating officer in March after serving as chief financial officer since 2014. 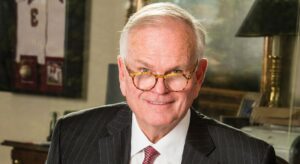 Jenkins will remain a director of the Raleigh-based company, which is owned by its 13,000 physician members and employs about 200 people.

Curi’s board picked Sandner after a national search. “Jason has a strong background in all of our areas and he just knows the business cold,” says Robert Schaaf, a Raleigh radiologist and Curi’s board chairman. “We were also looking for someone with a service heart because our team has to have the well-being of our physicians in their mind at all times.”

Sandner has managed the financial strategy of Curi and its affiliates as the business has grown to $1.2 billion in assets and broadened its services beyond providing medical malpractice insurance. He joined the company in 2011 after working for Johnson Lambert, a Raleigh accounting firm.

“I don’t envision any major changes immediately because we have a clear vision, strong Board leadership, a great team of experienced senior leaders, and a vibrant culture,” Sandner says. Over the last decade, Curi has expanded the number of states in which it can operate from three to 47. The company has also expanded with a private investment fund operator, SharpVue Capital, and the Curi Capital wealth management unit.

Jenkins ranks among North Carolina’s most influential executives, having served as chairman of the boards of UNC Health and the N.C. Chamber. He co-chairs MyFutureNC, a nonprofit pressing for more North Carolinians to earn post-high school degrees and certifications. A Shelby native and Wake Forest University graduate, he worked for Ernst & Young before joining Medical Mutual in 1994. He became CEO a year later.

“Dale has been one of our state’s most important and effective leaders,” says Harry Smith, the former chairman of the UNC Board of Governors and CEO of Greenville-based Rise Capital, a private-equity business that has received financial backing from Curi. “He has always looked out for for the best interests of our state.”

Curi’s net income has averaged about $40 million annually over the last four years, while its $573 million surplus has helped it earn an A financial strength rating from A.M. Best, which analyzes insurers. It has had that rating for 17 straight years.