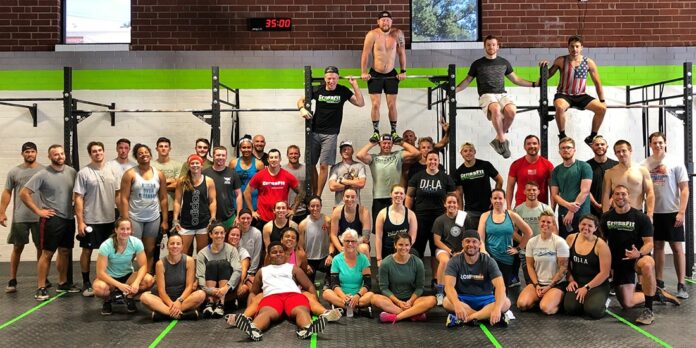 Members of CrossFit Simplicity in Burlington pose after a group session. About half of the gym’s members show up every day. Simplicity fosters a community environment with regular outings and events.

It’s called “The Seven.” Seven rounds of seven handstand push-ups, seven thrusters, seven knees-to-elbows, seven deadlifts, seven burpees, seven kettlebell swings and seven pull-ups. It’s one of CrossFit’s many WODs, or workouts of the day. Thousands of CrossFitters show up to nearly bare gyms, decorated with chalk, sweat, a few pullup bars, dumbbells, tires, medicine balls, ropes and other minimalist equipment, to rush through the intense circuits of weightlifting, body movements and cardio sets. A beginning CrossFitter is expected to take up to 50 minutes to run through The Seven, while elite athletes can knock it out in less than half an hour.

“The ideology behind it is total fitness,” says Daniel Blackwell, owner of CrossFit Simplicity, one of two CrossFit affiliates in Burlington. “A really good mixture of cardio, weightlifting and body movements for well-rounded fitness. We specialize in not specializing.”

Former gymnast Greg Glassman created and popularized the workout in California in 2000, opening the first CrossFit gym a year later. In 2005, CrossFit One44 opened in Raleigh. It was the first affiliate in the state and 13th in the country. Today, there are 200 CrossFit locations across North Carolina, including 14 in Asheville, 53 in the Charlotte area, 20 in the Triad, 57 in the Triangle, 13 in Fayetteville, 11 in Wilmington and one in Kill Devil Hills. Some affiliates partner with law enforcement agencies and first responders or hold classes at universities. Teachers at Salisbury’s C.C. Erwin Middle School who are certified CrossFit coaches are bringing the program to Rowan County schools through the Eagle Nation CrossFit affiliate.

CrossFit’s expansion peaked between 2012 and 2015 when it added 8,500 net locations. The chain’s growth has slowed to 2% to 5% annually and is mostly overseas now, according to Morning Chalk Up, a CrossFit newsletter.

Still, its 15,000 locations worldwide dwarf competitors such as Planet Fitness, which has about 1,800 gyms, Gold’s Gym with 700 locations, Snap Fitness’ 2,500 gyms and Anytime Fitness’ 3,000 sites. Each gym, or “box” in CrossFit lingo, is unique based on size and workout intensity level.

The fitness program has gained a major following from weekend warriors to the likes of former NBA stars Charles Barkley and Jason Terry, the NFL’s Greg Jennings, and professional soccer player Christie Rampone. Celebrities such as Jessica Biel and Tom Hardy have relied on CrossFit to get in shape for different movie roles.

The intense workouts, consisting of nearly constant movement, and the lifestyle, which places major emphasis on proper nutrition and supporting the community of fellow CrossFitters, are what separate CrossFit from other programs, Blackwell says.

Blackwell, 30, graduated from UNC Chapel Hill in 2012 with a degree in management and society. He started working out at a Mebane CrossFit gym in 2005 after sustaining serious leg injuries as a high school wrestler. In 2014, he bought CrossFit Training Valley in Gibsonville and sold it a few years later before purchasing a 5,000-square-foot warehouse in 2017 to open CrossFit Simplicity.

Simplicity has about 150 members, with pricing ranging from $160 per month for a six-month membership to $120 for 10 sessions, with discounts for students and first responders. Blackwell says he usually sees about 70 members every day. Simplicity is geared toward people without CrossFit experience. “Our motto is ‘simple yet effective,’” he says. “It’s for those that wanted more structure than trying to come up with individual workouts on their own.”

Nobie Thrasher, 46, purchased the CrossFit Voltage gym in Mint Hill last March. He says Voltage’s 50 members span all ages and vary from competitive athletes to those who have never worked out. The gym offers power and Olympic lifting, athletic competition training, and nutritional services. Prices range from $75 per month for student memberships to $150 per month for unlimited access.

Audrey Droppelman, a medical assistant in Charlotte, enjoys the team environment offered by CrossFit. “I found it was a good source of competition,” she says. “I enjoy the community. It’s like a sports team. You see the same people every day and push through the workouts together.” Droppelman, 23, joined CrossFit Chapel Hill before graduating from UNC and now takes CrossFit classes at the Dowd YMCA in downtown Charlotte.

In her experience as a group fitness instructor while attending UNC Chapel Hill, Droppelman found CrossFit has more consistent participation than other group workouts. “Burn Boot Camp [a Charlotte-based women-oriented boutique fitness chain] and others are great, but their workouts are more to go do with friends,” she says. “I’d say CrossFit participants pay money because they want to be there, where others pay money for a group-fitness plan and feel they have to work out.”

Blackwell says community is the backbone of CrossFit. “The accountability aspect increases attendance,” he says. “They’ll call their friends after a workout to say, ‘Hey, where were you today? We missed you.’ Or call each other out in Instagram videos for missing a class.” Simplicity hosts regular events and outings to baseball games and breweries and throws catered holiday parties for its members.
Most box owners will say they opened their business out of a love for CrossFit’s workout, lifestyle and community. “I’ve always enjoyed coaching other people, helping them reach their goals and potential they didn’t think they had,” Thrasher says.

Blackwell says he isn’t worried that a new CrossFit is opening in a warehouse near his location. “As opposed to other businesses, we make the pie bigger instead of competing between gyms.”
The fitness giant requires new affiliates’ owners and coaches to have a training certifications and proof of insurance. The operators pay an annual fee that can range from $500 to $3,000.

Droppelman participated in the most recent CrossFit Open, a five-week competition in which more than 12,000 athletes try to qualify for the global CrossFit Games. Participants submit their workout scores online. Only the top 20 men and women worldwide qualify for the games, which are televised by ESPN with $300,000 in prizes.

Blackwell encourages everyone to try the workouts but realizes “having CrossFit in front of the name can be a bit intimidating to someone who’s never tried it.

“CrossFit is for anyone but not for everyone.”