I went for my first haircut in a barbershop in 13, maybe 14 months. I’ve had my shots and felt a little more comfortable getting back to normal things. I could have gotten a barbershop haircut last May, after the two-month state shutdown was lifted. But I didn’t because I was 66 and cautious.

We bought some clippers and my wife did a fine — excellent! — job with them, with me in a kitchen chair on top of spread-out newspapers. Given my vaccinations, I figured last week it was OK to go see Fathead. 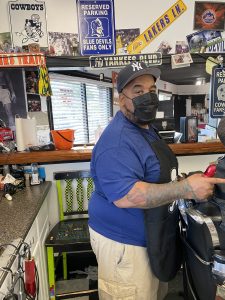 Fathead is my barber here in Clayton, my Johnston County town. Around 10 years ago, it was late on a Saturday afternoon and my regular barber had closed. I saw Fathead’s place was open on U.S. 70 Business, so I went in and have been going ever since. The sign says Fatheadz, which is what it is called. Pre-COVID, when I was getting shaggy, my wife would tell me that it was past time “to visit Mr. Fathead.”

The day after my haircut last week I went back because I wanted to find out how things have been. Before I give my report, you may be wondering what Fathead’s real name is. I had no clue so I asked him. He told me, but asked that I refer to him as Fathead because that’s how people know him.

Fathead came down from New York 22 years ago. He worked at another Clayton barber shop before opening his own place 12 years ago. He is 52 and has three sons he brought down here “to give my kids a better life.” He wears a Yankees cap as he works.

Remember March of last year? For weeks, COVID-19 was spreading in the U.S. Cases were popping up all over. Gov. Roy Cooper ordered a bunch of businesses, including barbershops and hair salons, to close.

“I just wanted to be prepared,” he says. “But I really wasn’t prepared.”

Well, few of us were. Most of the barbers working in shops are independent contractors who pay monthly fees to the owners, according to Michael T. Swinney, founder of the North Carolina Barbers Association and owner of the One Stop Barbershop in the Fayetteville area.  But barbershop owners like Fathead still had expenses – rent, utilities and the like.

The shutdown lasted for around two months. In late May, Fathead was able to open back up at 50%.

“The first week we opened up was great. People really missed us, and people really needed haircuts. And then it kind of went to a weird rhythm,” he says.

After that initial run of business, his shop was doing around 15% of normal.

“We lost the church crowd, the businessman crowd and the back-to-school crowd,” says Fathead.  “And a lot of elderly people and a lot of people who were nervous about the pandemic still didn’t want to come out of the house.”

“I guess you can look as bad as you want when you’re sitting at home praying.” And the work from home thing is not great for the hair care business.

He is fully staffed again, with a new group of barbers. “I lost my whole crew during the pandemic. A lot of shops shut down. When shops shut down, businesses went for sale cheap. They bought barber shops that were established already. They saw an opportunity of going into business themselves.”

So, it is Fathead and four new barbers. Pre-COVID, the shop was full of sturdy wooden chairs that would all be full of folks waiting their turn. He still has walk-in business, but he’s doing more appointments than before. “I want a 2 o’clock appointment. I want a 3 o’clock appointment. People don’t want to wait with other people around.”

Right now, personal care businesses like barbershops and salons can operate at 100% but with social distancing.

Dennis Seavers, executive director of the NC Board of Barber Examiners, says there was a dip in the number of barbershops after the pandemic hit, down to around 2,300. It’s back up to around 2,400.

“Some barbers do very well,” says Seavers. “I was surprised to learn from some of our board members that some barbers can make over $100,000 a year.”

But, he says, “A lot of barbers, they live off whatever they make that week. Most Americans don’t have a ton of savings.  So, this was very hard.”

The pandemic “has been very hard on [the] personal contact industry,” agrees Lynda Elliott, executive director of the Board of Cosmetic Art Examiners, which regulates more than 15,000 salons.

Barbershops and salons have long had an important role in our communities as gathering spots, places where people talk to each other. Growing up involves telling the man or woman working on your hair how you want it, not your mom or your dad.

Fathead is aware of his civic role. He has held back-to-school free haircut-cookout-school supply giveaway events every August, the second Sunday, pulling together help from churches and groceries and other vendors. I would be remiss if I didn’t mention this.

Because we don’t know exactly where things will stand this coming August, pandemic-wise, it will be a drive-through event in front of the Clayton High School gym, to give out school supplies. “We usually give out about 2,500 book bags and feed about 5,000 people.”

While I was conducting my interview, he was working on a customer with a red Babyliss clipper powered by a Ferrari-designed engine, like the car. He stopped to share the details of next August’s event. It’s important to him.

I thanked him for his time and a decade of haircuts. “I appreciate you, young man,” he says.