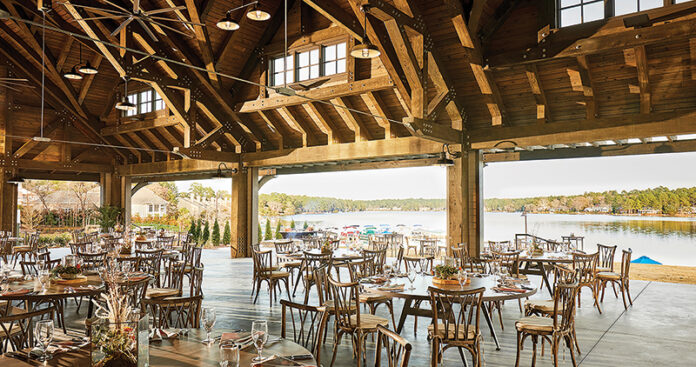 Ingenuity, patience and leisure travelers kept many of North Carolina’s meeting and convention destinations alive over the past 18 months. Now, they’re poised for a comeback.

Like many hospitality professionals, meeting planner Jennifer Johnson wasn’t prepared for March 2020, when the COVID-19 pandemic’s arrival brought concerns and stay-at-home orders. Events were postponed or canceled, including those organized by her company, Raleigh-based The Johnson Meetings Group. “I had a conference planned at the Sheraton Imperial [Hotel Raleigh-Durham Airport at Research Triangle Park] for August 2020, and I managed to reschedule it in August 2021,” she says.

That hotel’s group sales manager was furloughed twice before leaving to start a new career. “I’ve seen a lot of people, especially on the hotel-sales side of the meetings and convention sector, leave,” Johnson says. “And the hotels have had to be really creative and pivot.”

North Carolina saw nearly $20 billion in visitor spending and 178,700 tourism-related jobs in 2020, about a 32% and 26% drop, respectively, from the year prior, according to a U.S. Travel Association and Tourism Economics report. Tourism payroll dipped to $6.4 billion, nearly 25% less than in 2019. Besides staff turnover, meeting and conference destinations have dealt with prevention measures that prohibited all in-person gatherings. But by playing to their strengths during the pandemic, they survived and invested in assets that will provide returns when business rebounds.

Pinehurst Resort closed for the first 60 days of the pandemic, but golf never stopped. It was one of several outdoor activities that Gov. Roy Cooper preserved in his March 2020 executive order, which detailed the state’s COVID response. “That was the real game changer for us,” says Eric Kuester, vice president and head of sales and marketing at the resort. “When we learned we would be able to keep golf open, we knew we would be OK.”

But rough times remained for Pinehurst’s meetings and conference business. “When we started the year in 2020, we had around 40,000 group nights on our books,” Kuester says. “And I think we finished the year with 15,000 group nights.” The remaining nights were reserved beyond 2020. “This was a huge bite out of our group business segment,” he says.

Meeting and conference contracts are carefully crafted. Most include a force majeure clause, which protects planners from liability when cancellations are due to a major disruption such as an act of God, war, labor dispute or disease. Pinehurst, like all other conference destinations, accepted it for cancellations due to COVID. “We value our client relationships,” Kuester says. His sales team extended meeting contracts until the pandemic dragged on for so long that planners were forced to cancel outright.

As conferences and group events fizzled, leisure travel flourished. The Home of American Golf — Pinehurst and neighboring Aberdeen and Southern Pines’ nickname — welcomed visitors in staggering numbers. “While the business world went into lockdown, everybody discovered golf,” Kuester says. “We are talking unprecedented levels of leisure room demand, and that has allowed us to put group reservations into a smaller category until that sector of our business reopens.”

As golf enthusiasts perfected their game, many displaced office workers went to work on North Carolina’s beaches. In Wilmington, the local economy lost an entire year’s worth of meetings and conventions business, says Kim Hufham, Wilmington and Beaches Convention & Visitors Bureau president and CEO. But the region’s three main beaches — Carolina, Kure and Wrightsville — thrived. “People were coming down and renting beach cottages for weeks to work remotely, and kids were doing their schoolwork,” she says. “It was really cool to see people with their laptops down on the beach.”

Hufham says the difference between business travel and leisure travel was night and day. “If you look straight at the beach numbers, we had one of our best years ever,” she says. “But when you go into Wilmington, where hotels depend much more on group and business travelers, they suffered.”

Wilmington’s convention business is expected to rebound this summer. “Most of the planners we work with have promised they would return in future years, and we have been able to rebook about 75% of the events we lost,” Hufham says. “We feel like we have fared pretty well.”

No North Carolina city is more popular among meeting planners and conference attendees than Charlotte, according to hospitality-industry researcher MMGY Travel Intelligence. A recent study found 53% of attendees and 63% of planners are likely to attend or plan a meeting, respectively, in Charlotte. But even that wasn’t enough to completely ward off the pandemic’s effects. Visit Charlotte Executive Director Mike Butts says innovation and creativity best describe the Queen City’s pandemic survival strategy. Its restaurants, for example, designed outdoor seating landscapes and built new carryout models. “Our restaurants looked at the possibilities of creating experiences for their customers that provided fresh air, a fun environment and a chance to get together for a socially distanced, safe meal,” he says.

Butts has noticed a recent uptick in requests for proposals from meeting planners. But they are forecasting smaller attendance numbers. He believes that dip is temporary and predicts attendance to reach pre-pandemic levels by next year.

Greensboro-based Koury Corp.’s three properties — the Sheraton Greensboro at Four Seasons, Holiday Inn Greensboro Coliseum and Grandover Resort & Spa — were hit hard by the pandemic. While Grandover’s golf course had a record-breaking 2020, the rest of the Koury hospitality family suffered. “First and foremost, we were concerned about our employees,” says Kelly Harrill, executive vice president of hospitality at Koury. “We knew that every employee we had to furlough and send home had a family to support, so we did everything we could to mitigate their losses, including finding small maintenance jobs to provide [work] hours.”

As Koury’s hotels have reopened and leisure travelers returned, the stress has eased. “The leisure market really carried us,” Harrill says. “Plus … our hotels were completely full during the spring furniture market.” The 122-year-old High Point Furniture Market, whose 12 million square feet and $6.5 billion economic impact make it the state’s largest trade show, provided relief in the Triad, increasing business at hotels and restaurants.

The market’s spring gathering, which draws as many as 75,000 people from around the world, was pushed to early June from April this year. That was a big change from a year earlier, when the market was canceled for the first time since World War II. “It felt strange not to have market last spring,” says Visit High Point President Melody Burnett. Things improved in October, when the scaled-down market saw half the usual crowd and two-thirds of the typical exhibitors, according to the High Point Market Authority.

Like destinations statewide, High Point benefited from visitors who took a day or weekend trip. Burnett says leads from consumers looking to furniture shop jumped 260%, and the volume of responses to advertisements jumped 178% from the previous year. “Furniture shoppers not only helped our local businesses financially, but we found ourselves in a unique position to leverage our overall home-furnishing branding,” she says.

Day-trippers also made their way to Greenville during the pandemic, says Greenville-Pitt County Convention and Visitors Bureau President and CEO Andrew Schmidt. “When the economy started shutting down, we pivoted pretty quickly, because we knew conventions and meetings, sports, weddings, and reunions would be off the table for a while,” he says. What remained were outdoor activities such as rafting, kayaking and fishing. People could participate in those while respecting the social-distancing guidelines. “We saw a 36% increase in day travel from the Triangle to Greenville as compared to the year before,” he says.

Greenville Recreation & Parks Department is moving conference offerings into green spaces. “We always knew we had these assets because we use them for leisure, but now we realize we can use them for conventions as well,” Schmidt says.

During the pandemic, many conferences and meetings migrated to videoconferencing platforms such as Zoom. While they proved convenient, cheaper and timesaving, hospitality executives say in-person meetings and conventions will return. “After all, human beings need to be around other people, and it’s just not the same over a computer,” Harrill says. “I believe in-person meetings have nothing to worry about.”

The state GOP held a successful convention in Greenville in June 2020, and Schmidt says signs are pointing toward a banner 2022. He and others in the industry used the past year to prepare for a rebound as they watched travel numbers ramp up. They’ve expanded offerings, added venues and enhanced visitor experiences.

High Point by Design, a cohort of more than 65 branded showrooms that offers two types of shopping experiences, launched last year. Burnett says some showrooms are open to the trade only. Others welcome trade partners, as well as fans of design. HPxD extends the popular furniture market’s reach and designates its namesake city as a design hub. “We have been marketing that to get designers to return to High Point for smaller opportunities in between the markets,” she says. “HPxD uses existing showrooms that are available outside of the market months for designers to network, get continuing education and engage with each other and with the public.”

Charlotte welcomed a 35,000-square-foot connector between Bojangles Coliseum and Ovens Auditorium in 2020. Butts says it adds 4,400 square feet of meeting space, which has already been put to good use. “We hosted COVID vaccination clinics and held high school graduations there,” he says.

Pinehurst Resort is leveraging the U.S. Golf Association’s recent decision to open a headquarters nearby. “We’re building a high-end lodge with 36 rooms and a rooftop bar overlooking the Cradle course,” Kuester says. The Lodge at Pinehurst will have suites, meeting space and fitness offerings. It’s scheduled to open in time for the 2024 U.S. Open, which Pinehurst is hosting. ■

Round table: Travel and tourism, back to work and play