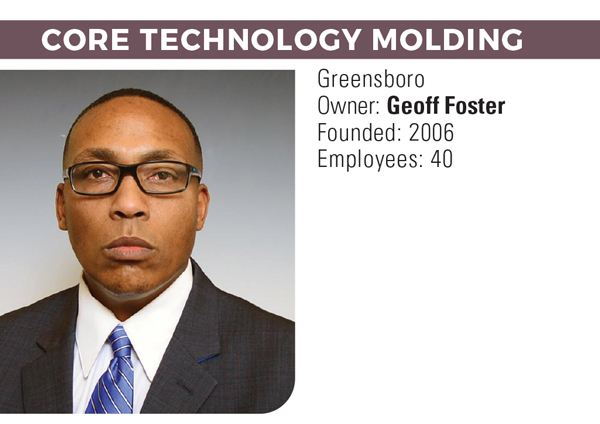 In 2016 when electric cars started attracting major public interest, Core Technology Molding supplied German automaker BMW with electrical connectors and other parts for its X3 model. Last year, with pharmaceutical giants in a life-or-death race to develop COVID-19 vaccines, the company pumped out syringes and plungers for Pfizer. “We just built our second clean room this summer,” founder and CEO Geoff Foster says.

“We’re picking up the Merck vaccine business as well as Pfizer. We went from about 5% biopharma business to about 60%.” The precision injection-molding company has plenty of upside in the automotive industry. It signed contracts recently with Volvo cars and trucks and Mack trucks.

Foster also hopes to develop ties with Toyota Motors North America, which plans a $1.3 billion electric-battery plant at the Greensboro-Randolph Megasite in Randolph County. Foster, 54, is a New Jersey native who came south to attend N.C. A&T State University. He earned a master’s in industrial engineering there and later added a Wake Forest University MBA.

Before starting his business, he was a manager at Becton, Dickinson and Co. in Durham. He’s received top entrepreneurship honors from Ernst & Young, the Greensboro Chamber of Commerce and Carolinas-Virginia Minority Supplier Development Council. Core Technology’s most recent successes stem from “teamwork and partnerships,” including close ties with his alma mater.

“I’ve been an adjunct professor there, now in my 15th year, in applied engineering, teaching one class a semester,” he says. “A&T has helped us tremendously with recruiting STEM (science, technology, engineering, math) employees.” The company occupies a 35,000-square-foot building at Gateway Research Park in east Greensboro and sends its products to more than 150 countries.

“This is an extremely capital-intensive business and we have millions of dollars in equipment,” he says. “Starting out, financing is a chicken-or-the-egg situation. Everybody wants to know how many machines you’ve got and how many customers. But you can’t get the customers because you don’t have the equipment. That’s the biggest challenge.” A decade and a half later, the egg has hatched.