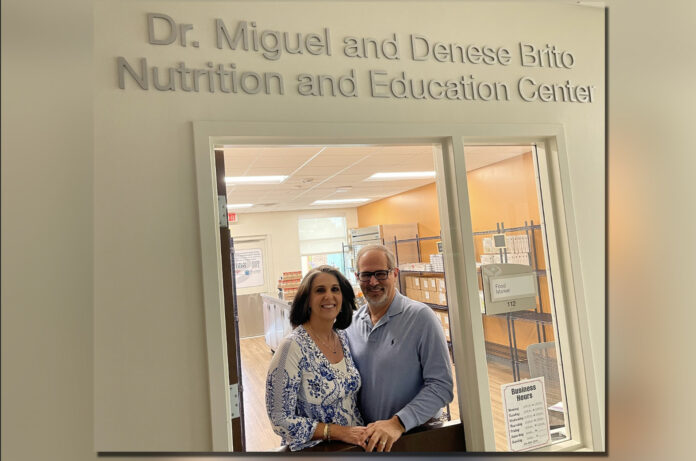 Cone, the leading hospital and health care provider in Greensboro, has a network of outpatient facilities in the region, but this was its first one specifically for women.

But what was also noteworthy is that it was designed to include a small grocery store for the building’s patients. It wasn’t originally going to be a grocery, but more like a traditional food pantry.

That changed with the involvement of Cone veteran Jamilla Pinder and a couple of donors, Denese Brito and her husband, Dr. Miguel Brito, who moved to Greensboro from South Florida to be close to family.

“Let’s not do a pantry,” Pinder recalls saying. “Let’s really be thoughtful about how we create this space, that really restores dignity and affirms people.”

The MedCenter provides a variety of outpatient obstetric and gynecological services, particularly prenatal and postnatal care. It is designed to be a one-stop shop for women’s health care, with genetics counseling, ultrasound and mammography, breastfeeding support, behavioral health care and physical therapy.  The two-story, 30,000-square-foot building is near the main Cone Health campus, and its new, $100 million Women’s & Children’s Center that opened in 2020.

Many women who will use the MedCenter live in low-income communities nearby. Poverty is not just a rural phenomenon, particularly in a county like Guilford that lost more than 45 percent of its manufacturing jobs over the past 30 years. The median household income in the MedCenter’s census tract is 38% lower than Guilford County’s. Many of the neighborhoods are in food deserts, areas without supermarkets and fresh food. High poverty and a scarcity of healthy food outlets mean that the folks who are coming to the MedCenter are more likely to have problems getting enough to eat and enough of the right foods. This becomes a serious health issue before and after childbirth, for mother and child.

As the MedCenter was being designed, part of the plan was to provide food to patients literally as part of their health care.

About that time, the Britos were in discussions with Cone’s philanthropy staff. “Once it became our community, we knew it was time to do philanthropy as much as we could,” says Denese Brito.

The Britos’ main interest was in cancer care. Denese Brito lost her father to lung cancer two and a half years ago.  “We had already given them a dollar amount per year that we would be donating,” she says. They were looking at Cone’s Wesley Long Hospital, and had visited the cancer center.

But the MedCenter was taking shape, and it needed donations, too.  The Britos saw the in-house nutrition concept’s potential to expand to other sites, like Wesley Long. Both Denese Brito and Pinder, Cone’s assistant director for healthy communities, agreed that they wanted a food market, not a pantry focused mainly on distribution, with bags already filled. In a market, you browse. You walk around. You take your time. You’re a customer, a guest.

“We wanted to design it like a grocery store.  We wanted fresh produce,” Brito says.

Pinder knows Greensboro, the neighborhoods around Cone, and the challenges that residents face.  She was raising a child at the same time that she was juggling college and a job at registration at the Wesley Long emergency room every other weekend. “Trying to make ends meet.” She has worked at Cone for 24 years.

“A lot of people don’t go to pantries, knowing that they need it,” says Pinder, “because they’ve either had poor experiences with going to a pantry, or just from a pride standpoint, dignity. It’s just, ‘I can’t believe I’m in a situation where I can’t provide for myself.’”

The market has been described as a “food pharmacy,” and that is because patients are referred by health care providers. In other words, just like your physician sends the Metformin prescription to CVS or Walgreens, a physician will notify the market that a patient is eligible to shop. So, yes, it’s a food pharmacy, in that narrow sense. In the broader sense, it’s a market.

“You go in just like a grocery store and shop,” says Pinder. Except that the food is free, which is  surprising to patients. “’Are you sure I don’t have to pay anything?’” they ask, according to Pinder. “No, you’re good.”.

The Dr. Miguel and Denese Brito Nutrition and Education Center has been in a soft opening for about a month. Nearly all the patients who have come in have been pregnant women, she says. The food is just part of it.

Healthy nutrition is often a logistical and knowledge challenge. Transportation is a barrier. It isn’t easy to carry four bags of groceries on a bus, so there’s a delivery service as needed.  And a lot of folks default to fast food because well, it’s fast. And easy.

“I’m looking at a cookbook right here,” says Pinder. “Eat well on $4 a day.” But if you don’t know how to cook, or if you don’t have utensils or access to a kitchen because of housing problems, you can’t eat well on $4 a day. And if you are working two jobs, you don’t have a lot of time, she says. So, the program provides training on meals that can be prepared quickly, and healthy pre-made meals.  “What’s going to work best for you?”

“A lot of people think, oh, just because people are low-income, well, they get food stamps,” says Pinder. “Well, it’s not that easy.  Many people, the working poor, do not qualify because they’re working. … That’s why they’re in this precarious position.”

What’s particularly interesting is that this program is embedded in a health care system.  Health care systems are good at looking at data and evaluating outcomes. There are a lot of variables, and the market is just one, but it may be possible to determine whether it improves patient health.

Other North Carolina health care systems have launched nutrition programs. Novant Health has a pilot program in Charlotte to deliver meals to women who are expecting, with hopes of expanding to other markets. Atrium Health has two practices in the Charlotte area providing food to patients who haven’t eaten that day, while also providing longer-term nutrition assistance. Duke Health offers nutrition and wellness education and resource counseling to high-risk obstetric patients. And UNC Rex has a food pantry that has assisted more than 2,200 patients in nearly three years.

The Britos came to Greensboro because five grandchildren are here. Miguel Brito was born in Cuba and arrived in Florida as a youngster. He became a pathologist. Denese Brito grew up in Florida. Together they have operated pathology practices, and Denese Brito flies down periodically to spend time on business. Miguel Brito, who retired when they moved here, has unretired and is working as chief medical officer for Palmetto GBA, which provides administrative services for Medicare.

Their hope is that the food market concept can spread to other Cone health care facilities, including near Wesley Long and Alamance and Rockingham counties. “Our goal is for it to eventually reach across Cone Health,” Denese says.

“They are both very passionate about making sure people have their basic needs met,” Pinder said of the Britos.  “If it wasn’t for their support, we wouldn’t be sitting here today with this food program. They’re really boots on the ground. They did a lot of the stocking.”

The market has gotten help from Greensboro non-profit BackPack Beginnings, which typically focuses on providing food for children. The organization has been providing food to patients at Cone’s Tim and Carolynn Rice Center for Child and Adolescent Health, and has expanded that to the MedCenter for Women with a grant from Food Lion Feeds.

But there’s plenty of opportunities to help. Businesses and individuals can donate money or food. Folks can volunteer time stocking, greeting patients. Pinder is putting the word out, writing grant proposals. “There’s many different ways that people can come in and get involved,” she says.