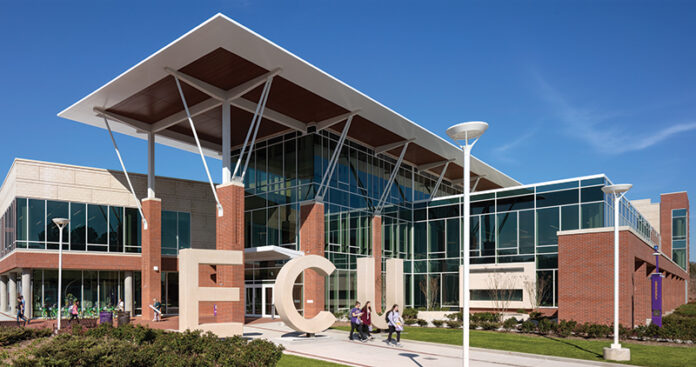 Innovation and collaboration equals transformation in Pitt County. It all adds up to better business opportunities and quality of life for its residents.

Innovation and collaboration equals transformation in Pitt County. It all adds up to better business opportunities and quality of life for its residents.

Pitt County is finding new ways to use a simple calculation — innovation + collaboration = transformation — to keep the positive momentum that it has been cultivating for decades going. Recent developments, despite challenges brought by the COVID-19 pandemic, have encouraged the team that recruits opportunities and markets the enormous potential the area presents.

“We couldn’t be who we are or even strive to be what we want to be without our whole community, including all of our municipalities and our surrounding counties,” says Kelly Andrews, Pitt County Development Commission’s executive director. “And we are all in this together. It’s a collaborative effort of many public and private partners.”

The Pitt County Development Commission has been around since 1959, and it has worked with local utilities and municipalities, Pitt Community College, East Carolina University, Vidant Health, local chambers of commerce and others on initiatives to attract businesses, develop a workforce, promote the arts and create a better quality of life for its residents. Greenville-Eastern North Carolina Alliance, a newly formed public-private partnership, augments the commission’s economic-development efforts. The two entities are partnering on initiatives to further promote, recruit and expand the capabilities of the Greenville metropolitan area.

Particularly during the COVID-19 pandemic era, when tertiary markets are getting more attention for economic-development projects, Greenville is moving onto more radars. “We are energized by the strong partnerships that exist and the ones that are forming in our area, and we know that we have a great story to tell,” Andrews says.

Elliott Sidewalk Communities, East Carolina University’s development partner, unveiled Intersect East in October. It’s an eight-year master plan to bring life to the ECU Millennial Campus, where its academic institutions will collaborate with industry, community, government and other partners to support commercial ventures. “Intersect East is a place where business and science will merge and a place where innovation will flourish,” says Tim Elliott, managing partner of Elliott Sidewalk Communities. “It’s a place where university and business intelligence will intersect, and the possibilities are endless.”

ECU was the eighth UNC System school to receive a Millennial Campus designation, which was granted in 2015. Intersect East includes developing and repurposing three vacant historic structures and constructing 11 buildings in Greenville’s former warehouse district. Its construction value is more than $325 million.

The public-private partnership will work to attract business clients that align with ECU’s mission and leverage research capabilities. The campus also will include mixed-use space, restaurants, townhomes and apartments. The completed project is expected to create as many as 1,500 jobs with an economic impact exceeding $141 million annually and $3 million in annual tax revenue.

ECU had the fourth-largest enrollment of universities in North Carolina in 2020, and it’s the only one with a medical school, school of dental medicine and college of engineering. With a student population nearing 30,000 and two campuses — one in Greenville’s uptown and the other home to its medical, nursing and dental schools in the heart of the city’s medical district — it’s fiercely committed to its motto: Servire, or “to serve.”

ECU’s commitment is clearly seen in Greenville’s transforming skyline, especially along 10th and Evans streets. Construction of the $90 million ECU Life Sciences and Biotechnology Building has passed the halfway point. It will serve as a gateway to ECU and eastern North Carolina, providing a dynamic environment where industry and community partners can engage with university faculty and students to develop innovative solutions, collaborate on product commercialization and strengthen strategic partnerships.

With this project, ECU is giving life to a transformational project in the heart of uptown Greenville. “We wanted a building that could address real-world problems in our region, involving our students and creating innovative solutions to those issues,” says Ron Mitchelson, ECU’s interim chancellor. The building, funded through the $2 billion Connect NC bond, which voters statewide approved in 2016, is expected to open in August.

Entrepreneurs can find fertile ground in Pitt County thanks to a growing support system. ECU established its Miller School of Entrepreneurship, the only named school of entrepreneurship in North Carolina, in 2015.

ECU, in partnership with Pitt and three other counties, created RISE29 in 2019 as part of a $1 million grant from Rocky Mount-based Golden LEAF Foundation, which distributes the state’s portion of the national tobacco settlement to economic-development projects. It’s the first university-wide initiative targeted at transforming students into emerging entrepreneurs. The program is developing a national model for rural microenterprise, job development and support for existing businesses. Through RISE29, students connect small-business ideas with regional needs, strengthen businesses with long-term continuity plans, develop and launch microenterprises, and commercialize the latest technology.

RISE29 recorded more than 18,000 hours of fieldwork with 36 business clients in Beaufort, Hyde, Martin and Pitt counties during its first year. It was saluted for its co-curricular innovation by the U.S. Association for Small Business and Entrepreneurship earlier this year.

Pitt County has been recognized nationally as one of the 10 All America Award winners by the National Civic League this year. The honor recognizes communities that leverage civic engagement, collaboration, inclusiveness and innovation to successfully address critical issues and create stronger community connections.

Pitt was the only county recognized among this year’s winners. “Receiving the designation of All-America County for 2020 by the National Civic League demonstrates Pitt County’s collaborative approach to addressing community needs,” says Pitt County Manager Scott Elliott. “Through involvement of both internal and external partners, we have been able to effectively meet the needs of citizens that otherwise might not be addressed.”

Identified in Pitt County’s mission is an intentional commitment to engage all residents, determine their needs and implement solutions to community issues. Three initiatives were highlighted in Pitt County’s application for the award.

The Reentry Council helps individuals recently released from incarceration find temporary housing, training, job placement, transportation, substance-abuse support, mentoring and education. More than 500 individuals have participated in the program since 2015. Fewer than 16% of them have returned to jail or prison.

The countywide Community Paramedic Program was showcased for its success in educating residents about health care and wellness and reducing readmittance to the hospital. It was launched in 2018 and is focused on the county’s commitment to health education.

Manufacturing comprises nearly 25% of Pitt County’s gross domestic product, well above any other sector, and 9.6% of the labor force works in manufacturing and distribution. Despite the unknowns of 2020, there have been opportunities for the manufacturing industry, and Pitt County has seen more jobs, investment and accolades at several local companies.

World Cat, a manufacturer of outboard-motor-powered catamarans used by recreational boaters worldwide, recently announced it was renovating a 230,000-square-foot factory in Greenville, where it will invest $8.9 million and create 60 jobs. It will position the company for long-term growth in the fastest-growing segment of the recreational boating market. A brand of HC Composites, it has been headquartered in Tarboro since 2002, and it will maintain its 180-person workforce there.

Greenville-based Grover Gaming, a designer and developer of software, game content and gaming systems, is utilizing an N.C. Department of Commerce Building Reuse grant of $125,000 at its Greenville location. It created 13 jobs. It plans to create 100 jobs over the next five years, nearly doubling its workforce. It recently was ranked 194th on the Inc. 5000 list, placing it in the top 4% of the nation in revenue growth. This is the company’s second consecutive year ranking among the nation’s fastest-growing and most prestigious private companies.

Utah-based Focus Services, a global innovator in customer-contact solutions, selected Greenville for its new 380-seat customer-solutions center. It has hired 400 and plans to hire 150 more.

Metrics Contract Services, a division of Australia-based Mayne Pharma Group and a full-service global contract development and manufacturing organization, is spending $10 million on an expansion of its novel oral solid dosage factory in Greenville. It invested $80 million and added 200 jobs there in 2015.

Mayne Pharma also is creating its own talent pipeline by partnering with Winterville-based Pitt Community College to award scholarships. As part of the first award, it gave eight students $2,000 per semester for as many as four semesters. While in school, students also will be eligible for part-time paid internships at the company.

Greenville-based Grady-White Boats President Kris Carroll was inducted into the National Marine Manufacturers Hall of Fame in September. The first female inductee, she has been at Grady-White for 45 years and its president since 1993.

Pitt County has great support, great partnerships and great assets. It is poised for great things. But when compared to others in the state, it’s still a relatively small metro area. It can be tough being the little guy among big players.

Farmville-based CMP Pharma can relate, but it’s forging ahead. CMP is a small but growing company in western Pitt County. It’s making a name for itself among larger companies with more recognizable names in its industry. Thermo Fisher Scientific and Mayne Pharma, for example, have had well-publicized local expansion announcements — totaling more than $300 million since 2014 and adding more than 700 jobs — in recent years. But CMP has a great story to tell, too. It adds to the mix of companies in the county, contributing to a stable economy that is poised for growth.

Going strong for 45 years, CMP was founded by James Olsen and Henry Smith, pharmacists with a vision for a company that develops products for unmet patient needs. In 1986, CMP introduced SPS Suspension, the first oral treatment for hyperkalemia — abnormally high potassium levels in the blood. Not only did it innovate this niche product, but it’s the leading provider. It remains its best-selling product.

Over the years, CMP added other products that fulfill needs while remaining “under the radar” with a stable and successful existence that creates quality jobs in its rural hometown. Gerry Sakowski was named CMP’s CEO in 2013, and he immediately began exploring the company’s growth potential. With the original mission, a great team and a future-focused-strategy, it has grown to 75 employees from 28, building more robust analytical and formulation development and quality controls.

CMP received U.S. Food and Drug Administration approval for its first branded cardiovascular product, CaroSpir, in 2017. A new drug application was approved in 2019, and today, CMP has five products under review and one more to be filed in January. Its growth strategy has included adding 19 sales representatives who promote CMP’s branded products nationwide. Its team is expanding, innovating and preparing for the future while honoring the company’s original mission.

Pitt County mirrors CMP’s spirit — building on a solid foundation, identifying unmet needs and producing innovative solutions. It’s creating a vision for the future to make the area stand out and be recognized for all that it is and all that it can be.

View the full version of the section on Pitt County by clicking here.