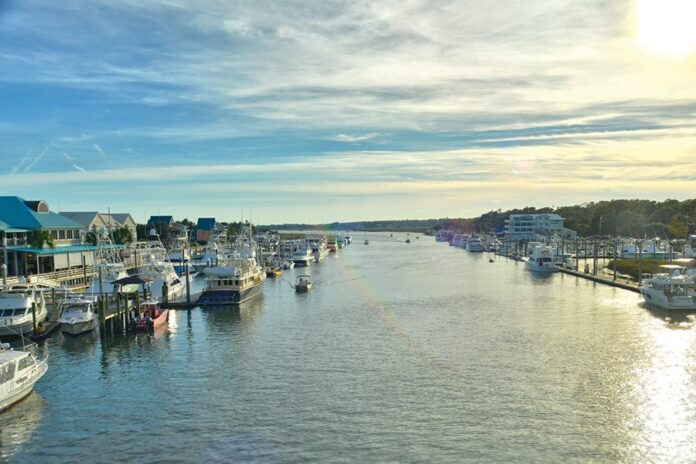 Coastal communities continue to welcome tourists despite the unprecedented challenges of coronavirus.

The Outer Banks’ narrow and winding N.C. Highway 12 begins its Currituck County leg in Corolla and exits 18-and-a-half miles south near Southern Shores and Wright Memorial Bridge. Most summers, the county welcomes about 500,000 tourists during the 10-week busy season. In 2018, visitor spending brought in about $234.2 million to the county, a 5.6% increase from a year earlier, ranking No. 23 in the state.

With safer-at-home guidelines and an executive order requiring masks in public places, Currituck County and other officials along the N.C. shoreline anticipated a massive slump in activity this summer because of COVID-19.

But coastal destinations have remained tourist hot spots despite the pandemic restrictions, and planned economic development — from multiuse neighborhoods to industrial parks — is continuing to move forward at a rapid pace.

“This has turned out to be a phenomenal year, probably the best in a decade. [Tourists] did cancel their reservations back in March, but as time went on with people being stuck at home, they wanted to get out,” says Larry Lombardi, economic development director of Currituck County. “[Highway] 12 is jammed. It’s one way in and one way out, and we have a good possibility of passing last year’s numbers.”

The 85 miles of shoreline that define the 11-city Crystal Coast is home to about 20 vacation rental companies and more than 100 independent restaurants that are all quickly learning to adapt, says Jim Browder, executive director of the Crystal Coast Tourism Development Authority.

“I don’t think we’re ever going to see normal again. I think it’s going to be a good late summer and fall,” he says.“The bookings are strong going into August and September. Is it going to be enough to offset the losses of the [spring months]? I can’t say that it will be. But we’re fortunate that our residents support local businesses.”

“Lifting lodging restrictions as summer kicked off will most certainly help to increase occupancy,” says Connie Nelson, public information director of the Wilmington and Beaches Convention & Visitors Bureau. “Another thing in our favor is that we have wide open spaces and are within driving distance of strong in-state markets. While we are hopeful that the summer season will continue to be strong on the coast, it is too soon to predict how the summer will end up or what will be the overall COVID-era impact. For now, we have projected a 34% revenue shortfall for the CVB’s 2020-21 budget, which is funded solely by a portion of room occupancy tax collections.”

In late June, 130 local small businesses were awarded $10,000 each through New Hanover County’s Small Business Economic Incentive Grant Program to help with COVID-19 adjustments to their daily operations. About 800 businesses applied for grants, including restaurants, bars, retail outlets and salons, medical offices and machine shops.
Higher education also is adapting. The 661-acre UNC Wilmington campus is preparing for fall by implementing social distancing procedures in classrooms, labs, libraries, residence halls, dining areas and competition sites. Face coverings will be required and made available in classrooms and labs, and selective testing and contact tracing will be in place, according to Chancellor Jose Sartarelli.

“The community and the university have continued to collaborate on many fronts and will continue to do so in the fall,” he says, adding that faculty and staff have gone “beyond the call of duty” to provide students with the best-possible environment.

“Many functions and programs have been cancelled and will be cancelled but at the same time, new ones will be offered,” he says. “For example, an on-campus drive-in cinema.

Research has been reduced significantly, and only now are we starting to authorize faculty to go back to their labs. International programs were all cancelled starting with spring and summer ones. Some plans are still in place for late fall.”

EXPLOSIVE GROWTH
While coronavirus concerns are mandating innovation in educational needs and business operations during a rush of vacation spending, other areas — industry prospects, new housing growth — also are defining summer along the coast.

Brunswick County has experienced significant growth over the last 12 years, and “this trend is not anticipated to change,” says Bill Early, executive director of Brunswick Business & Industry Development, which has two industrial parks of more than 1,000 acres ready for occupancy. “Our [proximity] to Interstate 140, I-40 and I-95 puts us in a central location on the East Coast to supply markets north-to-south and east-to-west. With continued growth and improvements taking place at the Port of Wilmington, Brunswick County is ideally situated to support international trade from both an import and export perspective. In essence, Brunswick County is the gateway to the world.”

With Brunswick County adding nearly 32,000 residents over the last decade, “it is imperative that we strive to bring employment opportunities to our growing numbers,” Early says. “Our focus is on higher-paying manufacturing and distribution jobs. Those companies requiring heavy infrastructure will be more inclined to focus on the northern area, while companies not requiring natural gas and rail service may explore options in the central and southern sections of the county.”

In the northernmost part of the state, Lombardi says coastline projects and inland activity are redesigning Currituck County. The College of the Albemarle Currituck’s Aviation Systems Technology programs appeal to students who “may want to stay or come back home to the local industries available to them,” he says. Nearby manufacturing jobs create a need for residential areas in the northern pocket of the county. Housing demand in Moyock is high, with 20 to 25 permits per month, and home lots near the Pamlico Sound are selling rapidly. “People are buying [home] lots, maybe in anticipation of the new bridge,” Lombardi says. “And actually, it’s a good time to build a home. Even with COVID-19, it hasn’t stopped. It’s crazy. I think it’s going to get crazier. People from the North drive through Moyock to get to the Wright Memorial Bridge, and a lot of them are looking to get away from big cities and, for the most part, we’re rural. Chesapeake, Norfolk and Virginia Beach are less than an hour away.”

To accommodate the influx in new residents and tourists, planning for a mixed-use residential, commercial and entertainment destination is on the way. The phased construction of Currituck Station will be on 3,000 acres in Moyock and will include trails, open space, housing and retail. At least one Fortune 500 retailer has plans to set up shop at the development. A Unified Development Ordinance was approved in June to lay out plans for the development after land is rezoned from agricultural.

“It’s planned for 30 years, but it could be fully built in 10, who knows?” Lombardi says. “People want to see some type of employment and commercial services up there instead of across the state line. We’ll be able to offer a variety of housing that attracts all ages — young, middle-aged, older.”

Construction on the new Mid-Currituck Bridge near Corolla has been rescheduled for summer 2021 because of N.C. Department of Transportation budget woes due to the pandemic. The $491 million, two-segment 7-mile toll road connector will provide a northern link to the mainland as well as a two-lane route over Maple Swamp. The bridge will also improve evacuation flow during hurricanes and storms.

“I was speaking to a guy from Kitty Hawk, and he says anything [residential that’s] $750,000 and under is selling like crazy,” Lombardi says. “It’s mostly northerners coming down here from New Jersey, New York, Ohio, Maryland, Virginia. We have more than 1,700 housing lots, residential lots, projected over the next five to 10 years with developments already in the planning stages that have been approved and are on the books.”

One of Lombardi’s key focuses is linking county manufacturing to Dominion Energy’s offshore wind project supply chain. Its wind farm, currently under construction about 27 miles off the coast of Virginia Beach, Va., is a vital economic development resource for the community. The company has pledged 4,000 new jobs over the next decade with median pay for wind turbine technicians of $54,370.

With a growing population and more than 3,200 skilled veterans living in Currituck County, “we have a trained workforce,” Lombardi says. “We have people who work in ship repair in Norfolk, but we also have smaller companies that are second-level contractors for the shipyards. So we’re looking for our fair share.”

TOUTING TOURISM
To the south, Crystal Coast communities are seeing an influx in visitor spending from tourists around the country.

“As early as mid-May, we were seeing visitors from Maine,” Browder says. “The bulk of our business comes from North Carolina, but that I-95 corridor is really strong. Rental homes are doing very well in terms of pace. On a percentage basis, we’re dominated by vacation rentals instead of hotels, because a lot of people would rather rent a house — especially if it’s a family — and have that isolation.”

September’s crowd-drawing events include the Arts & Crafts Fall Show in Beaufort and the North Carolina Seafood Festival in Morehead City. City officials are taking it one day at a time, according to Browder. “Some events can be done with social distancing. I think from a tourism standpoint, people are being optimistic. I don’t think any place is going to open the floodgates and not protect themselves and their staff.”

In Brunswick, Early says he is in the final stage of creating a “refresh” for Brunswick BID’s website. “Our messaging will focus on being a prime location to provide the business amenities that a company needs to be successful with talent, transportation and infrastructure while providing the lifestyle that corporate America seeks,” he says. His group’s Mid-Atlantic Industrial Rail Park and International Logistics Park, both on U.S. Routes 74 and 76, are ready for occupancy. Mid-Atlantic is a CSX Select Site, and the International location is eligible for the N.C. Department of Commerce’s designated Tier 1 incentives because part of the land is in Columbus County.

“While [they] are prime megasite locations within Brunswick County, we look at development potential throughout the entire county,” he says. “Target industries for Brunswick County include significant rail and heavy infrastructure manufacturing companies, warehousing and logistics, food processing and marine trades.”

But visitor traffic is vital. And summer has brought a healthy dose of traffic to Brunswick County and its beaches.

“We’re going to operate from an optimistic standpoint,” Browder says. “Looking into the fall months, I think we’ll see more of a normal situation. We’ll be looking at protecting people, but each festival scheduled hopes to have a steady crowd. It will be nice to see more places open.”

With the coast less than an eight hour drive from most northeastern states, many Northerners are opting to hop in their cars for a getaway rather than in a plane during the pandemic.

“There’s no issue of social distancing on the beach, the nicer homes have pools and there’s delivery services for groceries,” Lombardi says. “People are coming out of the woodwork. And when it rains, they go to the shops and buy their knickknacks. We’re looking good. We’re very blessed, and we’re very fortunate.”

Click here to view complete PDF of this story.