The following stories are examples of the industries, business large and small that make Coastal NC a thriving area.

Appeared as a sponsored section in the December 2019 issue.

The Crystal Coast has one of the highest concentrations in the U.S. of marine-science agencies doing oceanic research.

Carteret County’s focus on marine biology started in 1860, when Army surgeons at Fort Macon established a field station to catalog animal and marine life in the area.The National Oceanic and Atmospheric Administration established its Beaufort lab a few decades later in 1899, and the industry has continued to grow ever since.

There are now eight major marine-science research and education agencies in Carteret County, also known as the Crystal Coast. An economic-impact study done by the county in 2018 confirmed what many already knew: The scientific-research communities have a significantly positive economic impact on the coastal community of about 70,000 people.

This includes private-sector research facility Geodynamics LLC, a company that specializes in coastal and nearshore mapping through the use of various forms of sonar technology. Husband and wife duo Christopher and Sloan Freeman launched the company in 2003 and now work with 14 employees on contracts for government agencies including NOAA and the Navy.

Geodynamics uses hydrographic charting to monitor changes along the shoreline that could affect shipping and commerce into coastal cities. This includes subcontract work for the U.S. Army Corps of Engineers in cities along the eastern shoreline such as Baltimore and Savannah, some of which will contribute to port-deepening efforts. The small team recently won a bid to become a prime contractor for NOAA to provide chart updates that will “identify areas that are seeing a lot of change or are a hazard to commercial and recreational boaters,” Sloan says.

When starting the business, Sloan says they considered Wilmington as a possible location but decided that Carteret County met all of their needs and offered a great “quality of life with a small-town feel” that they couldn’t pass up.

“It’s really a special place to have such a concentration of marine science in one place,” Sloan says. “We find that the people that want to do our kind of work love it here, because we have great access to the natural environment and they tend to be ‘water people.’”

“There is research being undertaken at all of these labs that have an impact on our lives indirectly,” says Don Kirkman, Carteret County’s economic development director. “Everything from work being done to test water quality to determine the health of shellfish we might eat, to modeling for hurricanes to see what impacts they could have on the coastal communities in the event of a storm … does have an indirect benefit to those of us who live here.”
Click here to view a PDF of the graphics

An Outer Banks reptile business proves to be a unique way to have fun on the coast in North Carolina.

In a 200-year-old farmhouse in Currituck County, husband and wife Paul and Andreana DiDario found the perfect place to keep 132 of their closest friends, which just happen to be reptiles.
OBX Lizard Land LLC opened in 2017 and has been drawing curious visitors ever since. The museum is home to more than 100 different species of reptiles, including monitor lizards, poisonous dart frogs and a 33-year-old albino rat snake.

Lizard Land saw approximately 2,000 visitors over the summer of 2019, an increase in demand that allowed the DiDarios to operate at full-time hours, seven days a week for the first time. Paul, who was working a second job until November 2018, now dedicates all of his attention to the growing business. “I thought the first year was going to be a struggle, but it ended up being a good year and we saw a small profit,” he says.

Adults can visit the farmhouse and view as many as 33 different reptiles on display for only $5. Children 12 and under gain entry for $3.50, and children 2 and under get in for free.

The husband and wife team acknowledge high operating costs in this niche market make it difficult to see large returns. To keep ticket prices low, the pair take their reptiles on the road for birthday parties and class activities at local schools. “It’s become a functioning part of the business,” he says. “We have two birthday parties this weekend and another lined up for next [weekend].”

According to the N.C. Wildlife Resources Commission, the state is home to 37 species of snakes, 12 species of lizards, one species of alligator and 21 species of turtles. Many residents are choosing to keep native and exotic species of reptiles as pets. According to the Insurance Information Institute, about 4.7 million households in the U.S. own a reptile. This trend bodes well for another aspect of the DiDarios’ business model: reptile breeding.

While there is a demand for unique reptilian pets, most of that demand is not local to Currituck, Paul says. The couple attends reptile shows across the country to network and sell animals they have bred at their facility. This is a lot of work because they have to know the market demand as well as the reptiles that can be easily transported to shows.

“A lot of these rare animals are ones that people would love to have, but they are few and far between. We figure by breeding the ones that are easy to keep, we will make a decent profit each year,” he explains. They also breed to supply exotic-pet stores in the region.

With business steadily growing, the couple has their eyes set on an expansion for OBX Lizard Land. They hope to begin construction on an updated facility on the current property within the next year, which will allow for even more reptiles and hopefully more visitors.

“We’re still growing, but so far it’s been a big hit,” Paul says. “We’re thrilled with where it’s going.”

As international trade continues to flourish, future-focused businesses are relying on competitively priced access to global markets to help their operations thrive. That’s why they choose the modernized facilities and abundant capacity of North Carolina Ports.

The North Carolina State Ports Authority is constantly seeking new ways to expedite shipping, expand services and tailor its growth to customer needs. An aggressive $200 million improvement plan is underway at the Port of Wilmington, which recently completed a Section 203 study to determine the feasibility of necessary harbor improvements.

The port is expanding to simultaneously accommodate multiple ultra-large container vessels and to increase the speed and efficiency of loading and unloading vessels. The container yard expansion will increase the Port of Wilmington’s annual throughput capacity to roughly 1.2 million TEU (20-foot equivalent unit).

The Port of Wilmington is also home to one of the few on-port cold storage facilities in the country, offering more than 300 refrigerated container plugs on terminal and some of the fastest gate truck turn times on the East Coast.

The port isn’t stopping there. In August 2019, it broke ground on a project to triple refrigerated container yard capacity to more than 1,000 on-terminal plugs, while handling refrigerated cargo more efficiently. This will help better serve the North Carolina agriculture and grocery sectors.

With infrastructure and expansion advances over the next few years, customers and carriers will find even greater resources available at North Carolina Ports. Officials view the expansion as a vital investment — not simply in the success of valued customers, but also in the future of North Carolina. 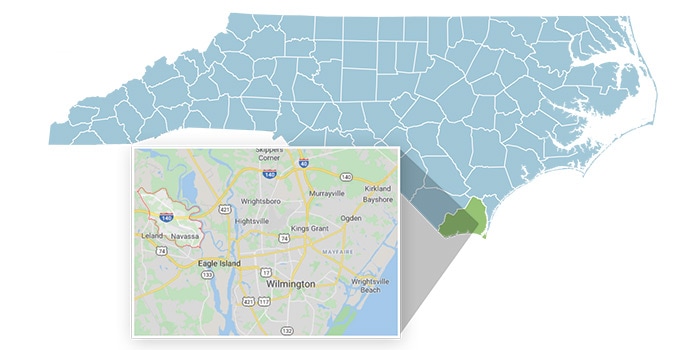 Pacon Manufacturing Corp. is moving south to warmer weather and an ideal distribution location. Based in Somerset, N.J., Pacon manufactures towels, wipes and liquid products for national corporations including The Clorox Co. and Burt’s Bees Inc. Founded in 1949, the family-owned company has outgrown an existing building.

It was a former U.S. Marine boat manufacturing facility in Navassa that met all Pacon’s needs when it sought a new location. Lawrence Shannon, vice president of Pacon, says there were three main requirements in the search: a larger building with room to grow, a region with a diversified and skilled workforce, and a location in a state that would further the company’s goals.

“We market industrial buildings, sites and regional assets both domestically and internationally to get people interested in southeastern North Carolina as a place for manufacturing, distribution and back-office operations,” Melvin says.

Though Pacon has not started construction for the $37.6 million project, it hopes to be finished by early 2020, with an initial production line operational by the end of the first quarter. A small part of the operation may remain in Somerset, “but the large majority of our manufacturing and day-to-day functions will transition to the Brunswick County facility,” Shannon says. “That will take place over the course of 2020, and some of it will probably roll into 2021 just as we move pieces down.”

The property that Pacon purchased in Navassa had been on the market for more than a decade. Bill Early, executive director of Brunswick Business and Industry Development, says Navassa was once a town rich in manufacturing, but most companies have left.

The North Carolina Department of Commerce ranks counties on a tier system for economic wellness. Brunswick County is in the strongest tier, but that’s skewed by waterfront development. “If you look inland, there are a lot of rural communities, with Navassa being one of those,” Early says.

He calls Navassa “one of the most economically distressed communities in Brunswick County.”
“This is a very positive thing for Brunswick County and Navassa by creating new jobs in a building that has been vacant for about 10 years,” Early says.
Pacon plans to add 299 jobs in

Navassa over the course of three years with an average salary of $31,273. The positions will require both skilled and unskilled workers.

Pacon is eligible for a $300,000 grant through the One North Carolina Fund, a performance-based grant that supports economic investment in the state and was approved by Gov. Roy Cooper in April. The grant requires a match from local government.

“It will give us the room to grow … and the flexibility to open the doors to a lot more items in terms of packaging and products,” Shannon says.