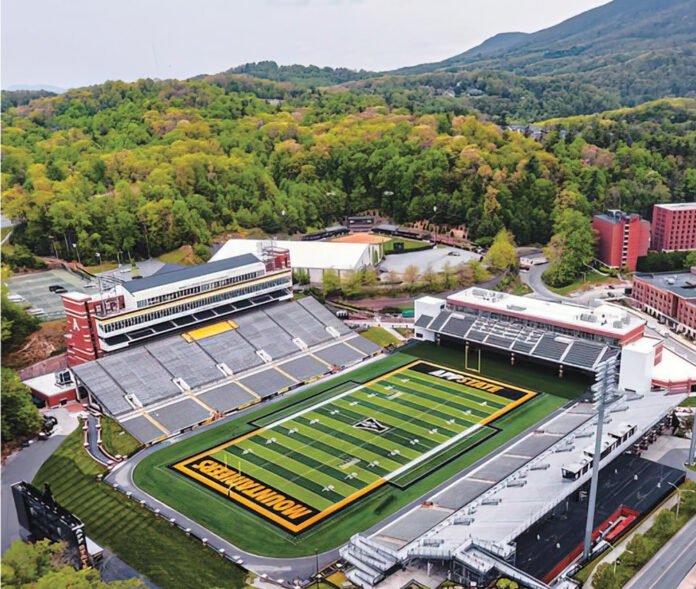 When Appalachian State University’s football team went to College Station, Texas, and beat Texas A&M in September, football fans, analysts and bettors were shocked. A&M was ranked sixth in the nation, and App State is a much smaller school in a less prestigious conference.

It was a big story for a few days, recalling the even more shocking upset of Michigan in 2007, when App State was in an even smaller conference. Making the story even more compelling was that A&M paid App State $1.5 million to entice the Mountaineers to show up; instead of getting an easy win, the Aggies paid to lose on their home field.

The sports world moved on. But I was curious. Usually, teams with deep pockets win against competitors with fewer resources, unless those competitors have figured something out.

Answering the question of what App State has figured out turns out to be important for much of college football, for these are turbulent times. The richest programs are growing richer with new TV money, threatening to relegate the rest to a sideshow.

College football has been dominated by what are called the Power Five conferences: the Southeastern Conference (SEC), including Texas A&M; the Atlantic Coast Conference (ACC); the Big Ten; the Pac-12; and the Big 12. App State is in the Sun Belt Conference, one of the five other athletic conferences that play in college football’s top division.

In the past 18 months, the tectonic plates of the Power Five have shifted as Texas, Oklahoma, UCLA and USC have switched to the SEC or Big Ten. The aftershocks have rippled everywhere, especially in North Carolina.

And that raises the stakes for ACC schools that have national aspirations in football. Can they remain relevant, or do they have to jump to the SEC or Big Ten? Fans and deep-pocketed boosters expect these football teams to compete for ACC championships and sometimes be Top 25 or even Top 10 programs. How do athletic directors say, “Sorry, we don’t have the money to keep up with Alabama?”

A resort at Texas A&M

But it may not be all about the money. When App State played Texas A&M, it was playing a much better-funded football program on a much larger campus, with more than 68,000 students to App State’s 20,400. Texas A&M spent $36.6 million on football in the year that ended August 2021, according to federal Department of Education reports. App State spent $8.5 million.

So App State hires less pricey assistants who are on the way up and other coaches who want the Boone lifestyle.

It also keeps a rein on game-day spending – what it takes to get players suited up, transported, housed and fed for games. Texas A&M was spending $4.7 million annually, compared with App State’s $1.4 million.

Facilities also matter because they can drive up operating expenses. Based on photos and video on the football program’s web pages, App State has decent but not ornate athletic facilities that look like normal locker rooms and weight rooms.

Texas A&M’s facilities look like a resort. Players have a spacious lounge filled with TVs and video game consoles. There’s a barbershop. A snack bar. A high-tech weight room with dumbbells stamped with a map of Texas. An indoor field with artificial turf to practice lateral movement. A studio for the SEC Network. Club Aggie doesn’t run itself — all this has to be staffed.

And then there is Kyle Field, which can seat more than 100,000 for big games. App State has Kidd Brewer Stadium, which seats 30,000 but can squeeze more on the grass. In September, a crowd of more than 40,000 saw App State lose to UNC, 63-61. (Yes, App State almost beat ACC and SEC teams on successive weekends. The Tar Heels spent $30 million on football, roughly 3.5 times App State’s football budget.)

Since it moved up to Division I-A in 2014, App State has been successful in the Sun Belt and beyond. From 2015 to 2021, it went 73-19, with six bowl wins and four Sun Belt titles, making App State the winningest I-A program in North Carolina during those years.

In 2019, App State went 13-1, beat UNC and South Carolina (in Chapel Hill and Columbia, to boot) and finished 19th in the Associated Press poll. Despite the win against Texas A&M and the near-miss against UNC, App State finished 6-6 this year and was ineligible for a bowl game. Its losses were close and App State is in the tough Sun Belt.

Given the historic success and average attendance of 33,600 this year, a move to a bigger conference with more TV money would seem like a no-brainer. But the sparse population of the Boone area doesn’t impress the networks that invest heavily in conferences. UNC Charlotte, which is in an attractive media market, is moving into the more prominent American Athletic Conference this year despite having had much less football success than App State.

Still, gridiron glory is generally considered a factor in App State’s 15% growth in enrollment between 2013 and 2022. That’s nearly twice as fast as the overall UNC System. During the same period, UNC Charlotte grew by 11%, while UNC Greensboro had a slight decline.

As for why App State punches above its weight in football, two narratives exist. Both are true.

The first is culture and tradition, which started with retired Coach Jerry Moore, who won 215 games in Boone and three national championships in the old I-AA division. The App State program still runs on the template he created from 1989 to 2012, with speed, resiliency and conditioning. There’s a statue of Moore at the stadium.

Conditioning also shouldn’t be overlooked. It doesn’t cost more to have a team that’s going strong in the fourth quarter. What it takes is a very determined coaching staff and players willing to put in the work because they have large, collective chips on their shoulders about Power Five recruiters.

“I’ve been to enough practices,” says Tommy Bowman, who covered App State for the Winston-Salem Journal during the Moore era. “There were very few, if any, teams that worked any harder than they did. Their work ethic was crazy.”

The other narrative is more of a “Moneyball” explanation. The Michael Lewis book and subsequent movie showed how Major League Baseball’s Oakland Athletics and general manager Billy Beane figured out how to sign undervalued players by focusing on attributes that mattered, as opposed to how players looked. That is how App State has always recruited players.

“Five-star recruits don’t say, ‘I’m going to go to App State over Alabama because I like the mountains,’” says David Jackson, the former associate athletics director and play-by-play announcer who called the Michigan game.

“What schools like App must do is prioritize the diamond in the rough,” says Jackson, now the CEO of the Boone Area Chamber of Commerce.

This can mean different things. It often gets simplified to a high-school center who would be on the Power Five radar if he were 2 inches taller or 30 pounds heavier.

But it is more complicated than that. Power Five schools go certain places and don’t go other places, like corporations that only recruit at elite universities. They also like finished products  rather than projects.

The upside is that prospects who aren’t being pursued by Power Five schools tend to be less concerned about player lounges and the quality of game hotels. They just want to play ball.

And because they just want a shot, they’re more likely to be flexible. When Moore was recruiting Armanti Edwards, one of the heroes of the Michigan game in 2007, he wasn’t a lock to play quarterback.

“They were both good runners, but we thought Armanti was the better thrower. And it worked out. Hillary was one of the best receivers we had.”

Edwards passed for three touchdowns against Michigan and ran for another. Hillary, playing in his first college game, returned seven kicks for 151 yards and caught four passes for 63 yards.

Perhaps the most well-known find in the bargain bin was Dexter Coakley, a defensive star in the 1990s who built himself through the strength and conditioning program into an NFL prospect, despite being 5’10”. He went to the Pro Bowl three times.

To illustrate how a frugal program like App State operates, former Athletics Director Charlie Cobb  told the story of when he first came from N.C. State to be the athletic director in Boone in 2005. He is now the AD at Georgia State University.

The team buses were headed to a game at Eastern Kentucky. They pulled off the interstate at a rest stop to eat lunch, and pulled coolers out with Chick-fil-A and Gatorades.

“If N.C. State had gone on the road, and we were playing [Kentucky], we’d have left RDU, we’d have had three catered meals and flown 35, 40 minutes to get to Lexington to get to go stay at a hotel and ate again,” he says.

That was 17 years ago, but the culture endures. “We talk all the time, ‘Spend it like it’s yours,’” says Doug Gillin, the current App State athletics director.

“We do a real nice dinner with a nice silent auction, and candidly, that’s how we raised the money to increase our nutrition spend,” Gillin says. “Because the program didn’t have the money lying around. Selling more game tickets or hot dogs wasn’t an option.”

Among the unsung heroes of App State’s football success are the students, each of whom pays an annual “athletics fee” of $783. The $13.6 million collected in 2021 dwarfed other revenue sources, according to the Knight-Newhouse College Athletics Database. While most UNC System students pay comparable fees, those attending N.C. State and UNC Chapel Hill pay $232 and $279, respectively. Big payouts from TV contracts lessen their need to charge students.

Sports boosters also make key impacts at many campuses. Over the years, the late oil tycoon Boone Pickens gave more than $300 million to athletics at Oklahoma State University, according to the university.

At App State, 61 individuals have committed a combined $29 million over the past decade to the Yosef Club’s Circle of Excellence Society. In 2017, Mark Ricks, an alum and security-industry expert, pledged $10 million. (The club is App State’s athletics booster group.)

Sarah Holder, who is App State’s assistant athletics director for business, spent eight years as an accountant in Boone before joining the university. She holds monthly budget meetings with the athletics department’s programs.

“We’re a public institution,” says Holder, who is a 2006 App State graduate. “We very much have our fingers closely on all our spending.”

Given App State’s success on a limited budget, you might question whether Holder gets asked about this often when she attends conferences on spending among athletic administrators.

“No,” she replies. “Which is surprising. … If someone’s successful at something, you kind of want to know what they’re doing. But I have not gotten any of those phone calls.” ■

A version of this article was published by The Assembly website.

2023 Legal Elite: Top N.C. lawyers as selected by their peers