NRP Group is one of the nation’s largest developers of affordable-rate apartments, including about a dozen projects in eastern North Carolina ranging from the coast to Durham. In January, the Cleveland-based company broke ground on Platform Lofts, the first affordable-rate apartment community adjacent to Charlotte’s Lynx Blue Line light-rail service. Completion is expected next summer.

Now the company is also expanding its market-rate apartment business in the state, recently opening a 309-unit project called The Parkwood at Optimist Park. It’s in one of Charlotte’s trendier neighborhoods,  just north of downtown and south of the NoDa entertainment district.

Jason Mochizuki, a vice president of development who has worked for the company in North Carolina for four years, discussed its efforts in an interview edited for clarity and brevity. 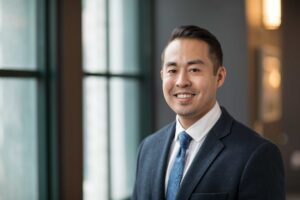 “We’ve been in North Carolina more than 20 years. Our first two sites were in Durham and Rocky Mount back in 1998-99. Al Scott, one of our two founders, had a second home in North Carolina, which probably influenced our decision to invest here.

“The company was founded in the mid 1990s as Neighborhood Revitalization Partners and we started in the affordable housing world, expanding into 15 states. Now we do both market and affordable rate projects.

“Affordable housing is a big mission for David Heller, one of our remaining founders. He really wants to make our communities a better place.

“In terms of site selection, NRP is strongly targeting sites in Charlotte with proximity to the Blue Line light rail and close to downtown Charlotte. The Parkwood is in the Optimist Park neighborhood which has a lot of positive momentum with the new Optimist Hall food hall.

“NRP is the only developer that has provided affordable-housing units along the light rail line. Not having more sites close to the rail line is certainly one of the regrets that the city is trying to address. (Units at Platform Loft will be reserved for people making 60% or less of the area’s median income.Bank of America Merrill Lynch provided equity financing for the development.)

“Our first project in Charlotte was Loft 135, a market-rate project at Church and west Morehead streets that we sold after it was completed in 2016. [The sales price was reported to be $78.5 million.] We both sell some of our portfolio and retain some. With affordable projects, you have to retain the ownership structure for 15 years because of the tax credit rules.

“The city of Charlotte should be commended for how it is engaging with the private sector on affordable housing. It is really putting its money where its mouth is, putting a lot of resources in trying to make affordable housing feasible.