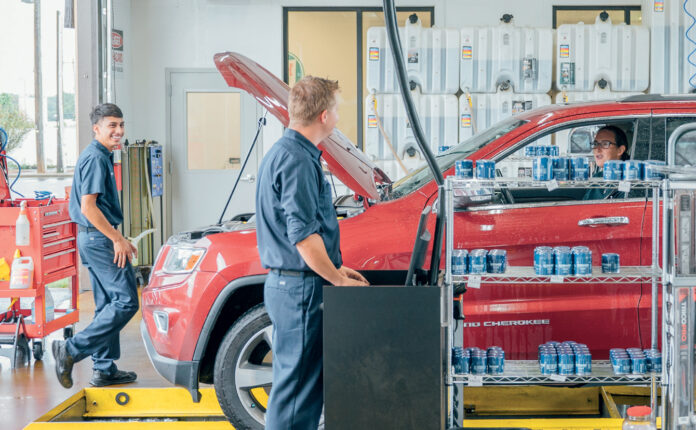 No auto-service business paints, washes, repairs or changes the oil for as many vehicles as Charlotte’s Driven Brands.

The Take 5 Oil Change at the corner of Tyvola Road and South Boulevard in south Charlotte stays busy, averaging 80 oil changes a day and annual revenue of $2.3 million. But this shop does more than its name implies: Charlotte-based Driven Brands uses the site to annually train about 200 managers, key cogs in a business with 4,400 locations. It’s part of the largest U.S. auto-service company’s strategy to create a fast-growth Wall Street darling by packaging thousands of small auto-service businesses into popular national brands.

Driven is a public company, though it’s controlled by 70% owner Roark Capital, an Atlanta private-equity group that specializes in backing franchise businesses, such as Arby’s, Dunkin’, Massage Envy, Anytime Fitness and dozens of other retailers. Roark has its fingers on 66,000 locations. By comparison, there are about 40,000 McDonald’s globally.

On a recent morning, Tyler Cagle, the company’s director of franchise operations, was instructing a dozen trainees from several states. He started with Take 5 Oil Change nine years ago as a store manager in Charlotte, before Driven bought the New Orleans-based chain in 2016 for an undisclosed price.

Franchise owners pick 200 trainees annually to visit Charlotte for a couple of weeks for training, while another 400 employees get online management training. The pitch is simple, he says. “You can go from pit technician to president [at Driven.]” 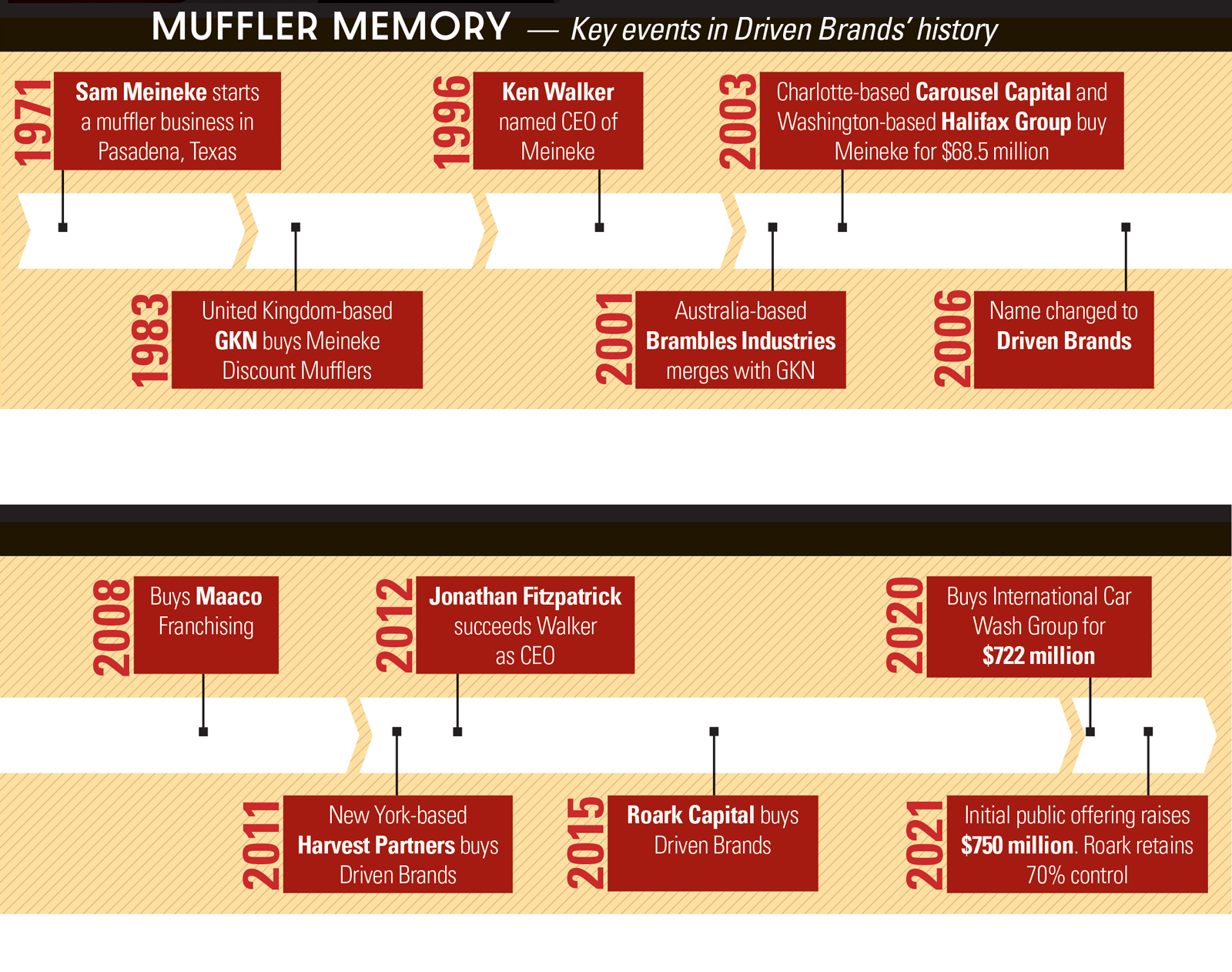 Driven grows by acquiring smaller, typically family-owned companies in its three core businesses of oil change, auto wash and auto glass. Then it folds them into existing brands and attracts franchisees who pay a percentage of annual revenue in return for marketing, training and other corporate support. About 60% of its 4,400 outlets in the U.S. and 14 other nations are franchises.

The auto-services industry is massive and fragmented. “Eighty percent of it is small chains and independents facing tough economic times and supply-chain pressure,” Mason says. “This is where scale really matters. Small independents don’t have flexibility, alternative supply-chain, consumer research, or the size and scales of Driven Brands. That’s a little bit of the upper hand we have.”

The company’s revenue tripled over the past three years to nearly $1.5 billion, while systemwide sales gained 4% to $4.5 billion. Driven opened a net 247 stores last year after adding more than 1,600 through expansions and acquisitions during the two previous years. Plans call for another 220 new stores annually over the next five years.

In a tight labor market, the possibility of upward mobility is among Driven’s hiring advantages. “Our labor pool is not skilled labor,” Mason says. “We don’t need (to hire) certified technicians; we compete for labor with quick-service restaurants. One of our selling points is that we can lay out a career path. We can take an unskilled laborer, then train you as a pit tech. We can offer [advancement] as well as a competitive wage and favorable operating hours. It’s a compelling proposition.”

Driven’s scale also helps it buy bulk quantities of oil and paint at competitive prices. It also has a centralized sales team to promote service and collision-repair packages to rental-car companies and other large-fleet customers.

Driven’s 250-person downtown Charlotte headquarters is a legacy of its Meineke Discount Mufflers unit, which moved from Houston in 1986. Then owned by British multinational GKN, Meineke promoted its brand through boxer George Foreman as a TV spokesman from 1993 to 2010. The company changed its name to Driven Brands in 2006 and diversified with the 2008 acquisition of Maaco, a Pennsylvania-based franchiser of auto body repair painting. Between 2003 and 2015, several different private-equity groups owned the business for various periods, including Charlotte-based Carousel Capital.

Since 2012, the business has been led by Dublin, Ireland, native Jonathan Fitzpatrick. He had been an executive vice president and chief brand and operations officer at Burger King in Miami, where he still lives.

The company’s ambitions have accelerated since Roark bought a controlling interest in April 2015. Over the next year and a half, Driven expanded in the collision-repair and quick-lube businesses, then added glass in 2019 and car wash in 2020. Fitzpatrick has overseen more than 80 acquisitions, with the largest being the $722 million purchase of International Car Wash Group in 2020.

Roark took the company public in January 2021, raising $751 million with shares selling for $22. Roark retains control of the business. Since the IPO, shares have traded between $25 and nearly $35, with a mid-May price of $25, equating to a
$4.2 billion market cap.

Fitzpatrick told analysts in February that Driven has less than 5% market share in a $300 billion, highly fragmented industry. He describes the industry as dominated by “white space,” namely small companies that are likely to be willing to sell their businesses. Driven employs 10 staffers focused on mergers and acquisitions who make about 1,000 calls a month looking for deals.

When Driven bought New Orleans-based Take 5 in March 2016, it had about 62 stores and revenue of $43 million. Last year, the brand had 653 outlets and systemwide revenue of
$565 million. Another 615 potential stores are in planning stages.

Plans call for significant growth in the car wash and auto glass businesses, which will be required whether cars are powered by combustion engines or electric batteries. In car wash, Driven has about 330 sites with more than 850 in development. Repairing auto glass is a $5 billion growth market in North America that is also highly fragmented, Fitzpatrick says.

Overall, the company’s cash flow has soared from $53 million in 2015 to more than $224 million last year. Earnings before taxes and interest costs are expected to reach $850 million in 2026, up from $465 million this year.

As vehicle owners can attest, cars and trucks must be serviced whether the economy is hot or cold. That makes for steady revenue at Driven. Sales of stores that had been open for more than one year grew at 1% in the 2008-09 downturn but have increased at a steady 4% to 6% annual range consistently since then, according to the company. (The year 2020 was an anomaly with COVID-19 causing a 6% decline that reversed last year.)

Analyst Elizabeth Suzuki, who tracks Driven for Bank of America, puts the company in the “do it for me” segment of auto care. “Within this channel, DRVN has an industry-leading position in a highly fragmented market, with superior margins compared to other public peers,” she wrote in an April report.

BofA research in April emphasized that U.S. consumers are spending aggressively. “The strength in (the) car wash business is consistent with what we see in recent Bank of America aggregated debit and credit card data,” Suzuki notes. She has a $53 price target for Driven’s shares, nearly double its mid-May price.

Other investors also see big value in buying auto service businesses and repackaging them. Private-equity funds have made many acquisitions of car-wash companies in recent years, paying prices that Suzuki and others have called “frothy.”

Fitzpatrick says Driven was ahead of the curve by entering the car-wash business about 16 months ago. Now it can build on its existing framework, he says.

One concern about the car-care business is that demand for repairs will lessen if there’s less commuting and car ownership in the post-pandemic world. But Mason says the average driver gets a monthly car wash, two oil changes a year and periodic repairs for window dents and window cracks.

“Everything has a frequency,” she says. “The idea is to weave together service concepts to capture your share of wallet. We have all that customer information about your vehicle (so) we can anticipate your needs (and) make sure we know what is your path to purchase. We want to make sure we can capture that.”

The information load enables Driven to reach out through email, social media pages, banner ads and even the Pandora music app. The company recently hired a chief digital officer, Matt Meier, from Whirlpool, where he worked on “connected” appliance experiences. “We’re just getting started on building a platform,” Mason says.

Mason joined Driven on March 2, 2020, nine days after the NBA announced it would suspend its season because of the pandemic. She had no previous auto industry experience, having worked at Lowe’s Cos. for 14 years, most recently as senior vice president of corporate finance. But repairing cars has lots of similarities with home-improvement retailing, she says. “It’s a non-discretionary component. Either way, you help the consumer maintain their first or second largest asset.”

Mason moved from Baltimore to Charlotte in 2004 with her husband, Robert Mason, now chief accounting officer for Dole Foods. The couple lives in Cornelius, with a daughter in high school and a son in middle school. She likes working in the heart of the city. “There’s a lot of energy uptown, and there’s a different workforce, one that’s more diverse.”

Mason isn’t concerned about a threat to Driven as the auto industry shifts from internal-combustion engines to electric vehicles. With 275 million cars on the road today, “even with the most aggressive assumptions, it’s two decades before a tipping point,” she says. In the quick-lube business, she says, “We buy a site, great real estate, at Main and Main in any market we go into. These boxes are simple, 1,500 to 3,000 square feet. As things evolve, we can embrace the change and change the service occasion.

“There will always be oil changes,” she says. ■

Interested in nabbing a Take 5 Oil Change franchise in the Carolinas? It’s too late because Driven Brands doesn’t have any spots available in the Southeast.

The only place where Take 5 franchises remain up for grabs are some rural areas on the West Coast, says Ted Rippey, a senior vice president who oversees franchise development for Driven’s 14 brands. He was a co-founder of 1-800 Radiator & A/C, which had about 200 franchisee-owned locations in the U.S. and Canada when Driven bought it in 2015.

Driven had 2,770 franchised outlets as of December, out of a total of 4,412 stores. Franchises remain available in some of its other 13 brands, while existing operators have agreements to open more than 900 stores. Last year, 187 franchised stores for Driven’s various brands were launched. 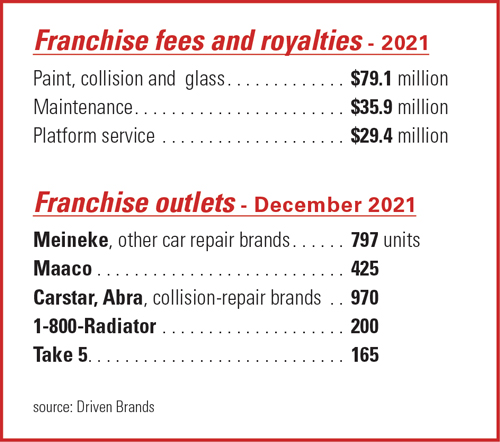 Rippey, who is based near San Francisco, oversees a staff of about three dozen people who recruit and oversee franchisees. Driven typically sells Take 5 franchise opportunities to multi-unit developers who are willing to operate eight to 20 shops, Rippey says. The average cost to develop a Take 5 is about $800,000, not including real estate.

The company collects about $17,000 upfront for each Take 5 outlet. Franchisees then pay royalties to Driven at 1% of gross revenue for the first year, 3% the second and third year, and 7% after that. Additionally, franchisors pay 5% each year to a marketing fund.

Royalties made up 10% of Driven’s total revenue last year, down from 19% in 2019. That reflects growth of its company-owned units and the expansion into the car-wash business, for which it doesn’t have franchises.

Obtaining a Driven franchise typically starts with a video call which “we would walk you through the investment, get you up to speed on our plans in your market,” Rippey says.

After that interview, the typical due-diligence period is three to six months. Driven offers guidance “in the real estate, training, marketing, back office, (and) demonstrates all the tools in the house,” he says.

A typical new franchisee meets weekly with coaches, enabling Driven to track every aspect of the business. For instance, Rippey says, “We know all the different technicians and how good they are at collecting email addresses. We communicate with them. If we’ve got one collecting 10% of email addresses and another at 90%, that is a coaching moment.”

Driven staffers visit each store a few times a year.

The company’s Meineke and Maaco brands have openings in parts of the Carolinas. “Both are solid businesses, growing like crazy,” he says. He estimates an initial expense of $400,000 to $450,000 for those outlets, again not including real estate.