Charlotte lawyer to the (reality) stars 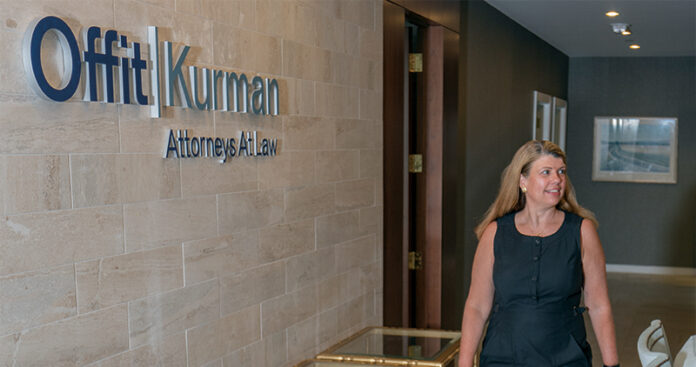 Mitchell Kelling comes from a family of physicians. Her grandfather, father, uncle and sister are all M.D.s. When she became a lawyer, she promised them she’d never sue a doctor.

As a family law attorney, she’s been able to keep her word.

She’d rather avoid litigation altogether. But when a case requires her to go to court, she doesn’t mind being a bulldog — a term that’s been used to describe her style and, she says, is probably accurate.

Kelling, 48, works in the Charlotte office of Offit Kurman, a Washington, D.C.-area law firm that has expanded rapidly over the last decade. The Cabarrus County native graduated from Concord High School and Harvard University before graduating from Wake Forest University School of Law. Her father, Doug, is a Harvard Medical School graduate who has been an internist in Concord for decades.

In her nearly 23-year career, she’s become a sought-after lawyer and a leader at the statewide level in family law. She’s taken on a number of high-profile cases and says she represents numerous NFL players but declines to discuss specifics for reasons of confidentiality.

Hollywood came calling in 2019. Well, not Hollywood exactly, but the producers of the Lifetime reality TV show Married at First Sight, which matches two strangers, films their quickie wedding, and then keeps the cameras rolling through the honeymoon and early days of marital bliss. Or discord, as the case may be.

Lawyer to the (reality TV) stars

A producer called Kelling to ask if she’d be among a small group of attorneys “on call” in the very likely event that one or more of the four couples wanted to call it quits soon after making it legal. The show’s ninth season was filmed in Charlotte. “I represented two of the ladies on that show,” she says, adding that she’s never watched an episode.

The production team wasn’t aware that North Carolina requires a year of separation before a divorce is official. Uh-oh. The producers called Kelling again.

“They said, ‘You really have to be separated for a year in North Carolina before you can get divorced?’” Kelling says.

“I said, ‘Yes, really.’ They said, ‘Are there ever any exceptions?’ And there are not.”

Fortunately, the newlyweds aren’t permitted to buy property together or open joint bank accounts. “So the actual separation itself is very easy. There’s nothing to divide.”

Also on the plus side is that the producers, rather than the hastily wed spouses, pay the legal fees. Kelling’s hourly billing rate is $425.

Divorce can get expensive. Kelling has had clients pay her six figures to undo a marriage. But it doesn’t have to be that costly.

Once or twice a year, she’s hired by a client who wants to divorce amicably. “When someone comes for an initial consultation, I’ll say: The more you can talk to your spouse about these issues, the easier it is and the cheaper it’s going to be,” she says. “I do have clients who go back to their spouse and say, ‘I talked to an attorney; here’s what she’s telling me,’ and they work out the terms themselves. Then, all I’m doing is drafting the separation agreement. They’ve done all the negotiations.”

It rarely happens, but when it does, Kelling is happy. And so is her client.

‘Kill them with kindness’

She cautions her clients to avoid the courtroom when possible. “I’d say about 80% to 85% of my cases get settled without ever seeing the courtroom,” she says. “And normally, the cases that do go to court, there were typically red flags from the very beginning. There might be mental health issues, addiction issues, someone wants to move away and take the kids. Those are things that don’t usually get reconciled” without a judge.

There are several upsides to staying out of court. “There’s the time factor; you’re going to get it done a lot quicker if you avoid court,” Kelling says. “There’s also the cost factor; it’s going to be less expensive, and I always tell people to consider the mental and emotional cost.”

When she does go to court, though, she’s ready.

“I am actively invested and involved in all my clients’ cases — probably sometimes to a fault,” she says. “It drives me crazy when you see attorneys who have their associate do all the work and kind of swoop in at the last minute and make their appearance in court. And you can tell when that’s happened because they don’t know the facts as well. They’ve got a script. If you get them off script, they get flustered.”

Rob Blair, a former law partner of Kelling’s who practices family law at Essex Richards in Charlotte, says Kelling is always prepared. “That’s the No. 1 thing. You know that going in against her. She’s also very quick on her feet. She’s smart. And she is really good at being protective of her clients and being a very zealous advocate for them.”

“I’m not afraid to be aggressive, if need be,” Kelling says. “But I don’t want to be. I’d rather kill them with kindness. [My clients] are going through probably one of the roughest, if not the roughest, periods of their lives, and I want to try and bring some resolution, some calm, some happiness to their lives. Just being aggressive and going to war isn’t necessarily good for my clients.”

North Carolina is one of six states to still allow lawsuits based on alienation of affection. To prove a claim, a jilted spouse must prove that he or she had a loving marriage which was diminished or destroyed by a paramour’s conduct. While most cases involve a spouse’s lover, there have been lawsuits filed against family members, counselors, therapists and clergy members who have advised someone to seek divorce.

Kelling is not a fan. “I will not file a claim. I’ll defend claims, because I think it’s horrible. I typically defend one or two a year. I mean, it does nothing to protect the institution of marriage and just makes it that much worse for divorce attorneys when they try and use it as leverage in a case.”

Still, some of Kelling’s colleagues at Offit Kurman feel differently and will file an alienation of affection lawsuit.

Kelling says she always asks if a third party is involved. “And if a client tells me ‘no,’ I typically don’t press the issue. A lot of times, I’m seeing people who are already separated, so it wouldn’t even be beneficial to hire a [private investigator] at that point because what you’re doing as a separated person doesn’t matter. The client … controls everything. Ultimately, it’s their decision. I’m there to educate the client so that they’re in the best position possible.”

Unlike the twice-divorced Carrey, Kelling has remained single. Has seeing all that heartache, acrimony and alimony led her to that decision?

“Maybe subconsciously,” she says with a laugh. “But it’s probably a conscious choice for my partner. His mother was married and divorced [several] times. My parents are still married. Plus, he and I met later in life. I was about 37, and he was 41.

Neither of us wanted children. Marriage just wasn’t on our radar. And then at some point you’re just like: Why rock the boat?”

Kelling has established a rule of never working on Saturdays. She’s most likely on the tennis court on her day off. Her extracurricular activities mostly make use of her expertise. Her term as chair of the N.C. Bar Association’s Family Law Council ended June 30.

The council holds continuing education programs for the state’s family lawyers and monitors the legislature for pending statute changes that could impact their specialty.

N.C. lawmakers have considered repealing the alienation of affection law at various times, including this year. “It didn’t pass, but in committee, the vote was 3-3, which is the best outcome we’ve ever had,” she says.

She has also volunteered at the Council for Children’s Rights as a guardian ad litem for years. The nonprofit in Mecklenburg County represents at-risk children in “high conflict” cases, which typically means domestic violence and/or alcohol or substance abuse, Kelling says.

Family law has changed markedly during her career. “When I started practicing in 1998, it was still routine for the mother to essentially get sole custody of the child, and Dad would have every other weekend, Friday to Sunday,” she says. “Now, the majority of judges in North Carolina — definitely in Mecklenburg [County] and surrounding counties — start with the idea that custody should be 50/50. That’s a significant switch.

“It’s now much more common to have both parents working outside the home. So it makes sense for both of them to manage the care of the children since nobody’s at home all the time.”

The legalization of gay marriage, sanctioned by a 5-4 Supreme Court vote in the Obergefell v. Hodges case in 2015, has also been a milestone. “I don’t even like that term because it’s just marriage,” she says. “It’s not heterosexual marriage and homosexual marriage. Even today, people will ask if it’s any different. No, we don’t have statutes for straights and different statues for the LGBTQ community. The law applies to everybody equally.”

In July 2019, Horack Talley — a Charlotte firm founded in 1932 — merged with Offit Kurman. It’s gone more smoothly than some marriages. About 27 lawyers made the shift along with a majority of staffers. They stayed in the same office but are now part of an East Coast firm with more than 200 attorneys in eight states.

While the dynamics have changed, Kelling says her practice has not. She has an interesting theory about family law attorneys. “Those of us who are successful tend to come from families where our parents have not divorced,” she says. “We didn’t go through a divorce as a child, so we’re able to be more removed from the process and [remain] objective. My parents have been married to each other for over 50 years.”

Five of the six family law attorneys at Offit Kurman’s Charlotte office have parents who are married or died while still married. “I have polled many friends throughout the state who are family law attorneys, and this theory holds for them, as well.”
Of course, another factor is that there’s never a shortage of people needing Kelling’s services.

“People will ask me, ‘How’s business?’” she says. “I’ll be honest. As long as people are getting married, they’ll also be getting divorced.” ■