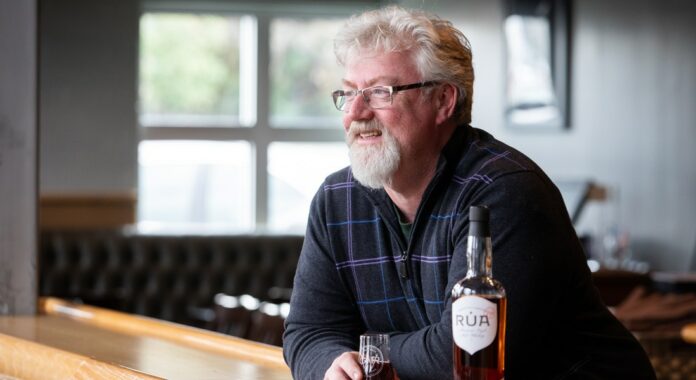 By Jim Dodson
Photo of Ollie Mulligan by Peter Taylor

“Let’s have a test,” says Ollie Mulligan in his rich county Dublin brogue. “Try this and tell me what you think.”

“Feel no pressure,” he adds with a mischievous chuckle. “But remember, my old Irish grandfather is probably somewhere watching.”

The drink is an Old-Fashioned, a simple all-American bar classic that predates the Civil War and involves whiskey, simple syrup, a dash or two of bitters, a cherry and a slice of orange.

The visitor, who fancies himself somewhat of a bourbon aficionado, takes a wary sip and shakes his head. A huge grin lights up Mulligan’s face. He seems to know the verdict before it’s given.

“Wow. Is that ever good,” gushes the surprised whiskey snob.

By now, Mulligan, 49, should be accustomed to this sort of enthusiastic reaction to the taste of Rúa. The name means “red” in Gaelic. “Generally as in someone with red hair, which mine was before two kids,” he quips. The simplest definition of a single-malt whiskey is one that is produced by a single distillery, using malted barley as the only grain in the mash. While single-malt spirits are produced throughout the world, most hail from Scotland, where they are aged in used sherry or bourbon casks. With its distinctive label and notes of vanilla and caramel, however, Rúa is aged in virgin oak barrels and hails from the heart of south Charlotte with merely its soul born in the ancient Gaelic hills.

In 2016 at Christmastime, Mulligan’s small-batch whiskey burst into public view after capturing first place in the drink category of Garden & Gun magazine’s coveted annual Made in the South Awards. Prior to this breakthrough, the company was shipping a dozen or so bottles of Rúa a week to customers through its online store, hoping to somehow gain a toehold in the competitive world of craft spirits.

“The next week, we sold 200 bottles and have never really slowed down since.”

Not long afterward, Rúa captured a pair of top honors at international spirits competitions in London and Los Angeles. “The really nice thing in Los Angeles was that Rúa beat Buffalo Trace bourbon by a point, a spirit that is almost legendary among bourbon fans. We can only hope for that kind of acceptance someday among serious whiskey fans.” Buffalo Trace Distillery, based in Frankfort, Ky., dates to the 18th century.

Someday may not be that distant. From a base of just two ABC stores two years ago, Rúa is now sold in eight states. “We’re still a small company, almost a family affair,” says Mulligan, whose business partner isn’t involved in daily operations. “But we’ve basically doubled our size every year in business.” Near the end of 2018, the 36-employee company was on track to ship upward of 3,000 cases of Rúa annually.

Meanwhile, a growing list of enthusiastic commercial and private customers includes Charlotte’s Ritz-Carlton hotel, which recently added Rúa to the honor bar in each of its guest rooms.

Mulligan’s story reads as a true immigrant’s tale. The self-described “character” came to this country more than two decades ago on something of a leap of faith, eager to check out America — Charlotte, in particular — and maybe find a new career.

A son of Dublin with roots in the hills of County Kildare, he was working for Motorola Corp. in 1993 when he and several of his drinking buddies decided it might be fun to move to the United States, given Ireland’s liberal annual lottery that was offered at that time. “It was a laugh at first, but I applied [with] eight of my friends, and six of us got green cards, if you can believe it.

Only one of my friends and I wound up emigrating, however.”

His older brother, Fintan, had moved to Charlotte a few years earlier, taking a job selling automated warehouse equipment. “I basically mooched off him for six months until I found a job working for BellSouth in South Carolina” as a radio-frequency engineer, he says.

After stints in Florida, California and Austria, Mulligan returned to Ireland in 1999 to build and launch a communications network. But after two years there, he missed America and wanted to return. He found work at a competing communications company in Texas, where he stayed for the next dozen or so years.

“The whole time, through all these travels, I was interested in making my own beer and spirits for my own enjoyment. I had all these stories about my mother’s father running from the law. I even had a newspaper clipping from her scrapbook showing my grandfather Patrick Quinn’s arrest for making poitín in 1953 in the town of Drumlish, County Longford.”

Poitín, sometimes spelled “potcheen” or “poteen,” is an unaged whiskey produced illegally for centuries in rural Ireland. Sometimes called Irish moonshine, it was made from potatoes, leftover grains and molasses. The 100-proof poitín Great Wagon Road Distillery makes and (legally) sells today is far smoother and sweeter than most unaged whiskies. Called Drumlish, it is based on a recipe handed down from Mulligan’s grandfather. “That’s why I say his spirit is always with us around this place,” he jokes.

In 2008, Mulligan returned to Charlotte and married his long-distance sweetheart, Lorraine, an interior designer. A few years later, he was sharing a brew with a friend in his backyard when Mulligan saw a vision of his future that Grandpa Quinn would have applauded. “I told my friend, ‘Let’s just get a license and start making whiskey. … Two days later I went on LegalZoom and formed an LLC. We bought some equipment and found 1,500 square feet in an industrial space in Pineville,” a south Charlotte suburb. “That was the easy part. Next I had to learn how to make high-quality, commercial American whiskey.”

Mulligan flew to Seattle to spend two intense weeks shadowing Rusty Figgins, one of the country’s most respected distillers. He learned not only how to make excellent whiskey but also how to avoid common mistakes. “He saved us years of headaches and problems.”

Great Wagon Road Distilling officially launched in 2013. “I wanted a good name that might mean something to people locally, something synonymous with whiskey,” he says. The company is named for the most traveled road of Colonial America, the frontier highway that brought the first European settlers to the Carolinas backcountry in the 18th century. Successive waves of Scotch-Irish and German immigrants settled much of the state’s western Piedmont. The Great Wagon Road ran straight through Charlotte.

“In essence, it’s the road that brought whiskey to America because that was the drink Scots and Irish had been making for hundreds of years.”

The company sold its first bottle of Rúa in December 2015. The next year, the distillery moved to a former flooring factory that had space for a bar and tasting room where they could serve craft beer and the five spirits they produce: Rúa, Drumlish, a pair of vodkas called Bán and Salamander, and a second poitín called Quinn’s.

“It was just made for a distillery/bar,” he says of the current space. “Running the numbers, too, it would take the distillery some time to be cash positive, and the bar provides that necessary income to keep the machine going.” It’s in an up-and-coming part of town informally called LoSo, derived from “Lower South End,” where a growing number of breweries and a cidery have taken root.

Mulligan acknowledges that he’s had “friendly approaches” from some of the most notable names of the spirits world. “The big guys,” he jokes. “But for now, we like the fact that we’re a small, hands-on company doing something we love and know how to do very well.”

Asked about a spirited future, the genial master distiller gives a final good Irish grin. “We’ll see what happens down the road. In the meantime, would you fancy another Old-Fashioned?”

The question was an absolute no-brainer.

2018 Small Business of the Year