After three decades developing drugs to counteract bacterial infections, Prabhavathi Fernandes appeared on the brink of her biggest hit: a drug to treat pneumonia that she believes could become the best-selling antibiotic ever. Its promise and Fernandes’ track record helped attract more than a half billion dollars of financing to Chapel Hill-based Cempra Inc. Investors bid up its stock to more than $2 billion in market value amid optimistic reports from industry analysts. Then, in a few weeks in November and December, the biotech rock star’s dreams came to an abrupt halt as federal regulators determined Cempra’s drug, Solithera, wasn’t ready for prime time.

Fernandes, 68, abruptly left the company she had built over the previous decade. Months later, a slimmed-down Cempra is focused on a rebound, while its former CEO remains shaken. “I don’t want to live through another November like that,” Fernandes says, fighting back tears.

Her agony isn’t over the lost effort or financial setbacks, she says. Rather, she laments one thing: “A lot of people know the facts about our products. Many physicians have wanted to have it available for their patients. They know the data, and the drug wasn’t approved. That’s the sad part.”

While drug companies regularly boom or bust, Fernandes was an unconventional CEO. “I broke the glass ceiling when I became a VP at Bristol-Myers Squibb,” she says, “and was liked on Wall Street in spite of being a triple minority in the business world: A woman, an Indian and a scientist.”

A native of Bangalore, India, Fernandes earned a master’s in microbiology from an Indian medical college. She married a physician, and they moved to Belgium, where her daughter now lives. The couple’s next stop was Philadelphia, where Fernandes earned a doctorate, also in microbiology, from Thomas Jefferson University. While teaching at Temple University, she took a research job at the Squibb Institute of Research working for Richard Sykes, who later became chairman of GlaxoSmithKline PLC. That led to an opportunity at Abbott Laboratories, where Fernandes helped develop a set of antibiotics called macrolides that are used to treat bacterial infections. The work spawned Abbott’s introduction of Biaxin in 2000; its generic name is clarithromycin. Since then, it has posted revenue of more than $1 billion.

“It’s the go-to drug for respiratory-tract infections,” the No. 1 reason for doctor visits, Fernandes says. 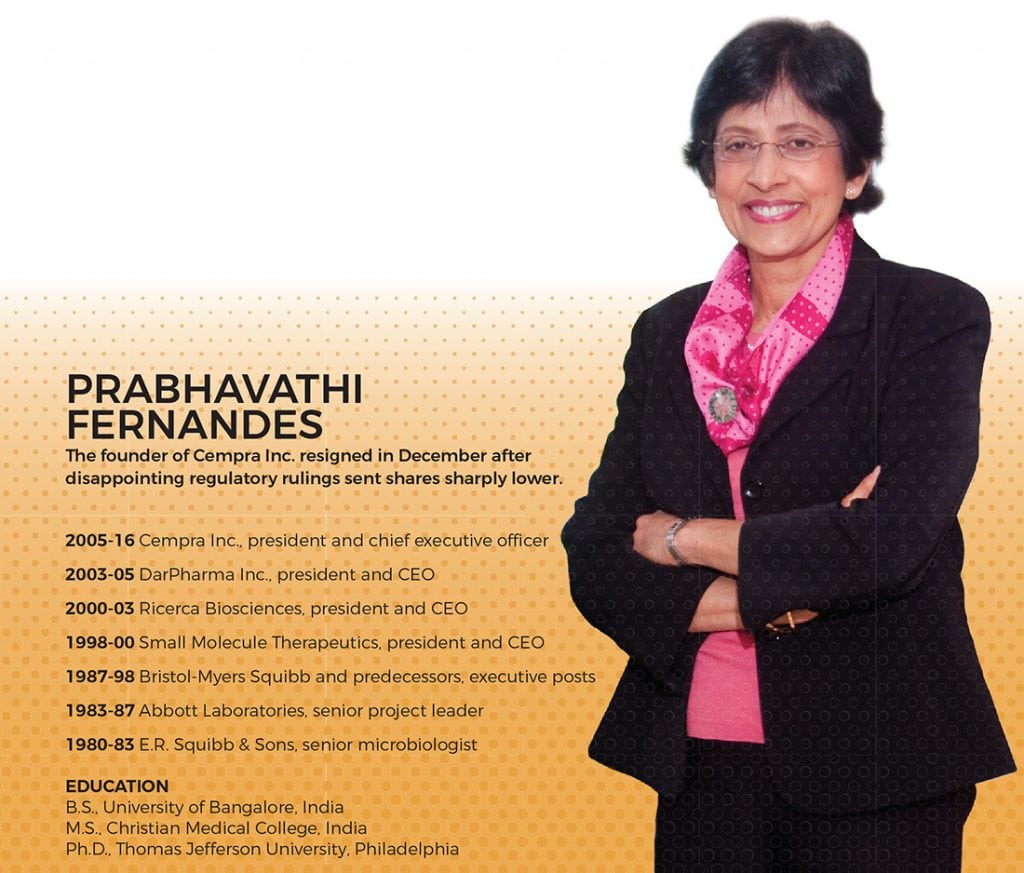 Fernandes left Abbott to work as a senior drug developer for Bristol-Myers Squibb for a decade before leaving in 1998. She spent the next eight years leading three small pharma companies. The last one, which attracted her to North Carolina, was now-defunct Chapel Hill-based Dar Pharma. The company, formed in 2000 to treat neuropsychiatric disorders, ran out of cash and was sold in 2005. Founder Jeff Segal, a Greensboro neurosurgeon, remembers Fernandes as an “intelligent, creative woman in a challenging industry.”

Cempra bought the license for a set of compounds for treating bacterial infections from Optimer Pharmaceuticals Inc., a San Diego, Calif.-based company acquired by drug giant Merck & Co. for $800 million in 2013.

Battling pneumonia is a huge opportunity for the drug industry because the illness hospitalizes more than 1.6 million patients annually and is the eighth-leading cause of death in the U.S., according to the Centers for Disease Control and Prevention.

Developing antibiotics is financially riskier than some drugs, however, because they tend only to be used for one or two weeks at a time. “Pharmaceutical companies would much prefer a one-a-day pill that you take for the rest of your life,” says Segal, who now owns a company that investigates credentials of expert witnesses in medical malpractice cases.

Fernandes wanted to sell the antibiotic at a relatively low price to gain market share rather than focus on hospitals with the sickest patients, the STAT health care news service reported in November. That strategy prompted hopes that its Solithera drug would be a huge seller. The company also is developing Taksta, another antibiotic in the late stages of drug trials that treats skin infections.

But success in drug development is akin to winning a lottery: For every drug approved by the FDA, some 5,000 to 10,000 compounds don’t make it through the process, according to a 2014 study by the Pharmaceutical Research and Manufacturers of America.

Cempra’s path became much tougher because of the travails of another antibiotic, telithromycin, which was approved by the FDA and introduced by French drugmaker Aventis SA in 2004. The company’s ads promoted its Ketek brand as the most successful antibiotic launch in history. Within months, however, reports of patients suffering liver damage and other ailments started emerging, prompting an FDA investigation. When investigators discovered that safety trials of the antibiotic had included fraudulent clinical data, Congress held hearings to study the agency’s approval process. The upshot was new policies — which Fernandes and others labeled “Ketek effects” — making it more difficult for pharma companies to receive a thumbs up.

For a long time, Cempra appeared to be bypassing Ketek’s fate. It went public in February 2012 at $6 per share, raising $50 million. By July 2015, shares traded for more than $40, for a market value of $2 billion. After receiving the FDA’s approval for a fast-track review of Solithera, the company raised another $100 million in early 2016, this time at $24 per share. Cempra’s progress impressed investors, and in early 2016, Cempra submitted a new drug application with the FDA for oral and intravenous versions of Solithera. The proposal included data from two Phase 3 trials that left Fernandes confident of a big breakthrough. 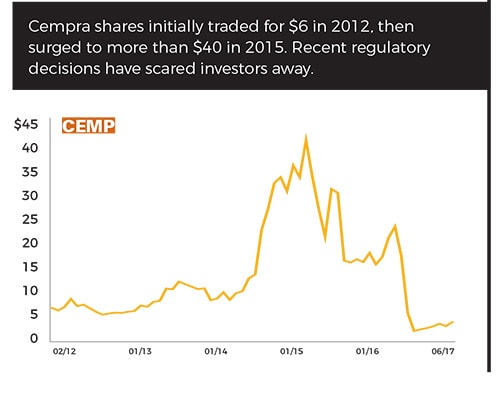 But it didn’t take long for rumblings of problems to send investors scurrying. Cempra shares, which traded above $15 for much of 2016, declined to about $7.50 in early November after a preliminary FDA report gave a gloomy outlook for the drug.

On Dec. 29, the agency declined to approve Solithera and suggested more testing, citing possible liver damage and other potentially negative impacts. The FDA also said too few patients were tested in the clinical trials, urging Cempra to study at least 9,000 people, or 10 times as many as it had studied. The FDA decision sent Cempra’s shares tumbling another 57% to $2.60.

Two weeks earlier, Cempra announced that David Zaccardelli had been named acting chief executive officer, replacing Fernandes. He worked from 2004-16 at United Therapeutics, a Maryland-based pharma company with more than 250 employees in Research Triangle Park. Fernandes says she left voluntarily, a decision she made after a former Abbott boss, André Pernet, died the day after Thanksgiving. A brother-like mentor for Fernandes, Pernet was among the world’s most acclaimed medical researchers for his work at reducing mortality of AIDS patients. While working for him, Fernandes recalls an Abbott colleague’s advice: “Don’t focus on what the commercial guys want. You give them what the patients need, and they will sell it.”

Since Fernandes’ departure, Cempra has asked the FDA to respond to its proposal to expand clinical trials for Solithera, though on fewer than 9,000 patients. In February it said it would dismiss 91 of its 135 employees to cut costs by 70%, and it hired the investment bank Morgan Stanley as a strategic adviser. Its second-highest ranking executive, President David Moore, left in May to join another pharmaceutical company.

Fernandes says she has sold about half of her Cempra shares, which totaled about 250,000, according to the most recent proxy filed in April 2016. She had another 600,000 stock options at exercise prices that exceeded the company’s value in early July. Her severance includes more than $1.5 million in compensation through mid-2018, including salary, bonus and a consulting contract.

“I’ve never had enemies. I get along with all my board members,” she says. Still, Cempra’s descent has been gut-wrenching. “People were loyal. They worked hard. They were passionate.”

For now, Fernandes wants to spend time with her husband and two dogs, and visit her best friend in India and her daughter and 1-year-old grandson in Belgium.

“For me, it’s nothing about the money,” she says. “I want these two drugs approved. Even to start Cempra, I was not financially motivated. I don’t have very expensive hobbies. I’m perfectly fine.”

She remains hopeful that new leadership at the FDA under the Trump administration will help clear the path for Solithera.

“Assuming [Solithera] obtains marketing approval, the shadow of Ketek will be left behind, to bring a much needed antibiotic to the market.”

Many companies would love to have $200 million in the bank, two potentially lucrative drugs and dozens of patents. Despite Cempra’s difficulty in bringing its antibiotic Solithera and topical skin-infection drug Taksta to market in the U.S., and losses topping $360 million since 2012, its strong balance sheet gives the company options to recover.

“Companies with that much cash can shop for smaller companies with some existing compounds,” says Jeff Segal, a Greensboro neurosurgeon and former colleague of Cempra’s ex-CEO Prabhavathi Fernandes. “They are almost like a venture-capital fund that has the internal talent to scout for new drugs.”

The company still had $203 million in cash and about $7 million in long-term debt as of March 31. That reflects strong optimism that enabled Fernandes to raise more than $500 million since starting Cempra in 2006. The stock-market value in early July was about $240 million, 90% less than its peak two years ago. Its biggest holders are giant money managers Fidelity Investments, Blackrock Inc. and Vanguard Group, which owned a combined 22% as of March 31.

Cempra may reverse course dramatically, Morgan Stanley analyst Andrew Berens wrote in a May report. He says it “will likely take a different strategic direction in the next six to 12 months, which could include discontinuing Solithera for a more commercially viable product.” Taksta alone doesn’t have enough potential to carry the company, he says, so Cempra is likely to consider buying other assets.